Niobe
This article is about the daughter of Tantalus. For other uses, see Niobe (disambiguation).

The Weeping Rock in Mount Sipylus, Manisa, Turkey, has been associated with Niobe's legend since Antiquity[1]

Niobe (Νιόβη) was a daughter of Tantalus and of either Dione, the most frequently cited, or of Eurythemista or Euryanassa, and she was the sister of Pelops and Broteas, all of whom figure in Greek mythology.

Her father was the ruler of a city called either under his name, as "Tantalis" [2] or "the city of Tantalus", or as "Sipylus", in reference to Mount Sipylus at the foot of which his city was located and whose ruins were reported to be still visible in the beginning of the 1st century AD,[3] although few traces remain today.[4] Her father is referred to as "Phrygian" and sometimes even as "King of Phrygia",[5] although his city was located in the western extremity of Anatolia where Lydia was to emerge as a state before the beginning of the first millennium BC, and not in the traditional heartland of Phrygia, situated more inland. References to his son and Niobe's brother as "Pelops the Lydian" led some scholars to the conclusion that there would be good grounds for believing that she belonged to a primordial house of Lydia.

She was already mentioned in Homer's Iliad which relates her prideful hubris, for which she was punished by Leto, who sent Apollo and Artemis, with the loss of all her children, and her nine days of abstention from food during which time her children lay unburied.[6] Once the gods interred them, she retreated to her native Sipylus, "where Nymphs dance around the River Acheloos,[7] and although being a stone, she broods over the sorrows sent from the Gods".[8] Later writers[9] asserted that Niobe was wedded to Amphion, one of the twin founders of Thebes, where there was a single sanctuary where the twin founders were venerated, but in fact no shrine to Niobe.

According to the accounts, Niobe boasted of her 14 children to Leto because the nymph only had two children, the twins Apollo and Artemis, while Niobe had fourteen children (the Niobids), seven male and seven female. The number varies in different sources.[10] Her speech which caused the indignation of the goddess was rendered in the following manner:

It was on occasion of the annual celebration in honor of Latona and her offspring, Apollo and Diana, when the people of Thebes were assembled, their brows crowned with laurel, bearing frankincense to the altars and paying their vows, that Niobe appeared among the crowd. Her attire was splendid with gold and gems, and her face as beautiful as the face of an angry woman can be. She stood and surveyed the people with haughty looks. "What folly," said she, "is this! to prefer beings whom you never saw to those who stand before your eyes! Why should Latona be honored with worship rather than I? My father was Tantalus, who was received as a guest at the table of the gods; my mother was a goddess. My husband built and rules this city, Thebes; and Phrygia is my paternal inheritance. Wherever I turn my eyes I survey the elements of my power; nor is my form and presence unworthy of a goddess. To all this let me add, I have seven sons and seven daughters, and look for sons-in-law and daughters-in-law of pretensions worthy of my alliance. Have I not cause for pride? Will you prefer to me this Latona, the Titan's daughter, with her two children? I have seven times as many. Fortunate indeed am I, and fortunate I shall remain! Will any one deny this? [11]

Niobe's Rock may assume very different appearances according to the distance of observation and the air and light conditions.[12]

Using poisoned arrows, Artemis killed Niobe's daughters and Apollo killed Niobe's sons, while they practiced athletics, with the last to die begging for their lives. According to some versions, at least one Niobid (usually Meliboea) was spared. Their father, Amphion, at the sight of his dead sons, either killed himself or was killed by Apollo for having sworn revenge. Devastated, Niobe fled back to Mount Sipylus[13] and was turned into stone, and, as she wept unceasingly, waters started to pour from her petrified complexion. Mount Sipylus indeed has a natural rock formation which resembles a female face, and it has been associated with Niobe since ancient times and described by Pausanias. The rock formation is also known as the "Weeping Rock" (Turkish: Ağlayan Kaya), since rainwater seeps through its porous limestone.

Niobe in literature and fine arts 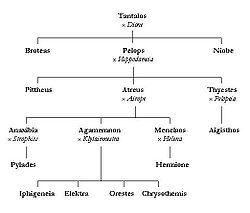 The story of Niobe, and especially her sorrows, is an ancient one. The context in which she is mentioned by Achilles to Priam in Homer's Iliad is as a stock type for mourning. Priam is not unlike Niobe in the sense that he was also grieving for his son Hector, who was killed and not buried for several days.

Niobe is also mentioned in Sophocles's Antigone where, as Antigone is marched toward her death, she compares her own loneliness to that of Niobe.[14] Sophocles is said to have also contributed a play titled Niobe that is lost.

The Niobe of Aeschylus, set in Thebes, survives in fragmentary quotes that were supplemented by a papyrus sheet containing twenty-one lines of text.[15] From the fragments it appears that for the first part of the tragedy the grieving Niobe sits veiled and silent.

Furthermore, the conflict between Niobe and Leto is mentioned in one of Sappho's poetic fragments ("Before they were mothers, Leto and Niobe had been the most devoted of friends.").[16]

Once into Latin language sources, Niobe's account is first told by Hyginus in his collection of stories in brief and plain Fabulae.

Parthenius of Nicaea records a rare version of the story of Niobe, in which her father is called Assaon and her husband Philottus. The circumstances in which Niobe loses her children are also different, see Niobids#Variant myth.

Niobe's iconic tears were also mentioned in Hamlet's soliloquy (Act 1, Scene 2), in which he contrasts his mother's grief over the dead King, Hamlet's father - "like Niobe, all tears" - to her unseemly hasty marriage to Claudius.[17]

Among works of modern literature which have Niobe as a central theme, Kate Daniels' "Niobe Poems" can be cited.[18]

The subject of Niobe and the destruction of the Niobids was part of the repertory of Attic vase-painters and inspired sculpture groups and wall frescoes as well as relief carvings on Roman sarcophagi.

Notably, the subject of the Attic calyx-krater from Orvieto conserved in the Musée du Louvre has provided the name for the so-called "Niobid Painter".[19]

A lifesize group of marble Niobids, including one of Niobe sheltering one of her daughters, found in Rome in 1583 at the same time as the Wrestlers, were taken in 1775 to the Uffizi in Florence where, in a gallery devoted to them, they remain some of the most prominent surviving sculptures of the Classical antiquity (see below). New ones come into daylight from time to time, like one headless statue found in early 2005 among the ruins of a villa in the Villa dei Quintili just outside Rome.[20]

In painting, Niobe was painted by post-Renaissance artists from varied traditions (see below). An early appearance, "The Death of Niobe's Children" by Abraham Bloemaert, was painted in 1591 towards the start of the Dutch Golden Age. Three notable works, all dating from the 1770s, "Apollo and Diana Attacking Niobe and her Children" by Anicet-Charles-Gabriel Lemonnier, "The Children of Niobe Killed by Apollo and Diana" by Pierre-Charles Jombert and "Diana and Apollo Piercing Niobe’s Children with their Arrows" by Jacques-Louis David belong to the tradition of French Baroque and Classicism.

A notable abstract work of the 20th century, titled, simply, "Niobe" was painted by Károly Patkó who also produced at the same time a sketch.

In classical music Benjamin Britten based one of his Six Metamorphoses after Ovid on Niobe.

In modern dance, José Limón named a section of his dance theater work "Dances for Isadora" as "Niobe". The section is a solo for a woman mourning the loss of her children.

Examples in painting and sculpture

The choice of "Niobe" simply as a name in works of art and literature is not uncommon either. Two minor characters of Greek mythology have the same name (see Niobe (disambiguation)) and the name occurs in several works of the 19th century. More recently, one of the characters in the films The Matrix Reloaded and The Matrix Revolutions was also named Niobe.

The element Niobium was so named as an extension of the inspiration which had led earlier to the naming of the element tantalum by Anders Gustaf Ekeberg. On the basis of his argument according to which there were two different elements in the tantalite sample, Heinrich Rose named them after children of Tantalus; Niobium and Pelopium, although the argument was later contested as far as pelopium was concerned.

A mountain in British Columbia, Canada is named Mount Niobe.