The Miami Hurricanes baseball team is the college baseball program that represents the University of Miami.

Along with the university's other athletic teams, the baseball team became a member of the Atlantic Coast Conference during the 2004–05 academic year. Previously, the baseball program competed as an NCAA independent, even during the school's Big East affiliation in other sports. Miami won its first ever conference championship in baseball when it captured the 2008 ACC Baseball Championship.

The Hurricanes play in Mark Light Field at Alex Rodriguez Park, on the UM campus, in Coral Gables, Florida.[1] Since 1994, the team has been under the leadership of head coach Jim Morris.

The University of Miami fielded its first varsity baseball team in the spring of 1940. Jack Harding, the school's head football coach, was charged with the task of putting together the first squad. The program's first game was played on March 3, 1940 at Miami Field, which was located on the southwest corner of the Miami Orange Bowl parking lot. The Hurricanes defeated Newberry, 13–12. The upstart team followed their first victory with 4 straight losses to finish their short, inaugural season with a record of 1–4.

Baseball took a 6 year hiatus on the Coral Gables campus until former football standout Eddie Dunn revived the program in 1946. Dunn led the Hurricanes to several winning seasons before leaving the program in 1954.[2]

The relative stability the new program enjoyed under Dunn was followed by several years of coaching upheaval. The Hurricanes would see 4 different coaches in the next 8 seasons. The first of these coaches was Perry Moss, who came to Coral Gables in 1955. Moss led the team to a respectable record of 15–7 in his only season at the university. After leaving Miami, Moss would gain notoriety as a football coach in the NFL, CFL, AFL and the now defunct WFL and USFL.

Moss was succeeded as head coach by MLB superstar Jimmie Foxx. Foxx was inducted into the Professional Baseball Hall of Fame in 1951 after a stellar career that included stops with the Athletics, Red Sox, Cubs and Phillies. His success as a player, however, didn't translate to wins for the Hurricane ballclub. Foxx coached two seasons at Miami compiling a record of 20–20.

In 1958, Whitey Campbell became the first former Hurricane player to assume the role of head coach. Campbell lettered in football, baseball and basketball as a student at the University of Miami in the 1940s. With the exception of the 1959 season, in which former coach and athletic director Jack Harding led the team, Campbell was the skipper of the Hurricanes through the spring of 1962. Campbell's teams never had a losing season in his four years as coach.

Ronald "Ron" Fraser arrived at the University of Miami in the fall of 1962 after spending 3 years as head coach of the Dutch National team. What was supposed to be a short 3 month stint with the team turned into a successful run that included 3 European Championships.[citation needed]

The task of turning the Hurricanes into a winner on the diamond was a daunting one. Coach Fraser encountered a program with no money, no uniforms, and no scholarships.[citation needed] He also had to work days at the Coral Gables youth center to supplement his meager pay check from the university.[citation needed]

In their first 7 seasons under the tutelage of Coach Fraser, the Hurricanes set school records for wins in 1964 (20), 1965 (23), 1968 (27) and 1969 (31). The program advanced to the postseason for the first time in 1971 when they competed in District III in Gastonia, NC. The Hurricanes won their first game against Georgia Tech, 4–3 before losing to Mississippi State and then being eliminated by Georgia Tech, 5–3. 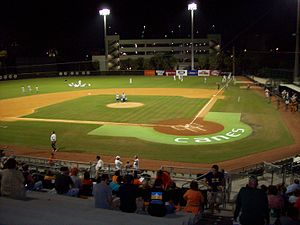 In 1971, Coach Fraser's dream of building an elite on campus stadium began to take shape. George and Ethel Light came forward to support the project by making the initial donation to the stadium fund.

Opening night for the brand new stadium came on February 16, 1973. A crowd of 4,235 watched as the Hurricanes defeated Florida State, 5–1. The Hurricanes thrilled the overflow crowd by executing a rare triple play in the win over the Seminoles.

George and Ethel Light made a second donation in 1974, which was matched by other donors, in an effort to build permanent concrete seating at the new facility. The stadium was dedicated in 1977 and named for Light's son, Mark, who died of muscular dystrophy. Unfortunately, George Light didn't get to see the dedication of the stadium named for his son. He died in 1974 shortly after he and his wife made their second donation.

The Hurricanes came close to winning the national championship in their first College World Series appearance in 1974. They followed up with 4 straight appearances from 1978–1981 before sweeping through the Atlantic Regional in Coral Gables en route to Omaha in 1982.

Miami opened the College World Series with a 7–2 win over Maine. The Hurricanes followed up with a close fought 2–1 victory over Texas. Miami's third game in Omaha had perhaps the most memorable play in the history of college baseball.

In what would come to be called the Grand Illusion, the Hurricanes used a hidden ball trick to pick off NCAA stolen base leader Phil Stephenson. In the 6th inning against powerhouse Wichita State, Stephenson took his usual lead from 1st base. Hurricanes pitcher Mike Kasprzak faked a throw to the bag. First baseman Steve Lusby dove to the ground then raced down towards the Hurricane bullpen where pitchers Dan Smith and Bob Walker leaped to avoid the ball. Stephenson set out for 2nd base as Kasprzak tossed the ball over to shortstop Bill Wrona for the tag. The Hurricanes swung the momentum in their favor and went on to win 4–3.

In the semifinal two days later against Maine, Miami pitcher Rob Souza threw a pickoff attempt over the head of Bill Wrona into center field. But the memory of the Grand Illusion kept the runner from trying to advance to third. Maine head coach John Winkin said, "I thought it was another trick play." Miami rolled to a 10–4 victory that propelled them into the championship game against Wichita State.

In the championship game, Wichita State jumped out to an early 3–0 lead. In the top of the 5th, the Hurricanes scored 6 runs with the aid of a Phil Lane 3-run home run. Miami added a run in the 6th and 2 runs in the 8th before closer Dan Smith finished off the Shockers in the 9th for the Hurricanes first national championship. Smith was named College World Series MVP while Lane and catcher Nelson Santovenia were named to the all tournament team.

Miami was unable to reach Omaha to defend their championship in 1983. However, the Hurricanes reached the College World Series again in 1984 before bowing out after losses to Arizona State and Cal State Fullerton.

The Hurricanes reached the 1985 College World Series by beating Florida, 12–9 in the final game of the Atlantic Regional. Miami began play in Omaha by thumping Stanford, 17–3 before losing to Texas, 8–4 in game 2. The loss to Texas put the Hurricanes in the losers bracket. The Hurricanes responded by pulling off three straight one run victories over Oklahoma State, Mississippi State and Texas. The win over Texas forced a winner take all championship game between the Hurricanes and the Longhorns.

In a game delayed a full day by inclement weather, the Hurricanes jumped out to an early 2–0 lead and never trailed the rest of the way. Miami closer Rick Raether pitched the final 2.1 innings to finish off the Longhorns, 10–6, and give the Hurricanes their second national championship. Designated hitter Greg Ellena was named College World Series MVP while catcher Chris Magno and pitcher Kevin Sheary were named to the all tournament team.

Ron Fraser led the Hurricanes to Omaha four more times before his retirement at the end of the 1992 season. In all, coach Fraser won 1,271 games while leading his team to the College World Series 12 times. He made the postseason 21 times in his 30 years as head coach and his teams never had a losing record during his tenure.

Coach Fraser was known as the Wizard of College Baseball due to his creative and innovative promotions geared towards generating interest in the college game. Major League Baseball stars such as Stan Musial and Ted Williams headlined several events to help raise money for Fraser's program. In one instance, Fraser ventured to Bristol, Connecticut to promote college baseball to the brass at ESPN. His efforts paid off as the sports television network broadcast several high profile college baseball games on national television.

In 2006, Ron Fraser was inducted into the inaugural class of the College Baseball Hall of Fame in Lubbock, TX.

On November 4, 1993, Jim Morris was named head coach of the Miami Hurricanes. In 12 seasons at Georgia Tech, Morris won 504 games and 4 straight ACC Championships. However, he never led the Yellow Jackets to a College World Series.