Freeport is a city, district and free trade zone located on the island of Grand Bahama of the North-west Bahamas. In 1955, Wallace Groves, a Virginian financier with lumber interests in Grand Bahama, was granted 50,000 acres (or 202 km2 of pineyard with substantial areas of swamp and scrubland by the Bahamian government with a mandate to economically develop the area. Freeport has grown to become the second most populous city in the Bahamas.The main airport serving the city is the Grand Bahama International Airport. The Grand Bahama Port Authority (GBPA) operates the free trade zone, under the Hawksbill Creek Agreement signed in August 1955 whereby the Bahamian Government agreed that businesses in the Freeport area will pay no taxes before 2054. The area of the land grants has been increased to 138,000 acres ( or 526 km2.[1]

Freeport is a 230-square-mile (600 km2) free trade zone on Grand Bahama Island, established in 1955 by the Government of The Bahamas. The city of Freeport emerged from a land grant comprising 50,000 acres (200 km2) of swamp and scrub to become a cosmopolitan centre. The Grand Bahama Port Authority (GBPA) operates the free trade zone, under special powers conferred by the government under the Hawksbill Creek Agreement, which was recently extended until August 3, 2054. The agreement also increased the land grants to 138,000 acres (560 km2).

Freeport is strategically located just 65 miles (105 km) off the coast of Palm Beach, Florida and on the major EW - NS shipping routes. This has positioned it for tremendous growth as an ideal centre for international business. Consequently, a growing number of international companies use Freeport as its site for business.

Freeport enjoys a subtropical climate with mild winters. Seldom do temperatures drop below 60 °F (16 °C). Average temperatures range in the low to upper 80s, with water temperature varying between 72° and 78°F. The winters are usually cool (mid 60's to 70's) and dry (with the exception of some rainfall due to Cold Fronts), while the summers are usually hot and wet.

The Rand Nature Centre (named in honour of its founder James Rand), Petersons Cay a small isle about 300 yards off the shore of Grand Bahama and the Lucayan National Park founded by Peter Barratt a former Architect/Town Planner of Freeport. The Lucayan National Park is 40 acres (0.16 km2) in extent and includes five ecological zones stretching from the south shore to the pineyard. There is an extensive underwater cave system beneath the Park. One cave entrance is accessible by stairs at the national park. Other caves are accessible for certified scuba divers.

Tourism, which topped over a million visitors a year but has considerably diminished since 2004 the year of two major hurricanes to hit the island. Several cruise ships stop weekly at the island. Much of the tourist industry is centered on the seaside suburb of Lucaya, owing its name to the pre-Columbian Lucayan inhabitants of the island evidence of whom has been found on the island. Freeport features at least two Junkanoo festivals near New Year's.

The city is often promoted as "Freeport/Lucaya". Most hotels on the island are located along the southern shore facing the Northwest Providence Channel. Primary shopping venues for tourists include the International Bazaar near downtown Freeport and the Port Lucaya Market Place in Lucaya. Recovery from two hurricanes has taken several years, but is now nearing full recovery.

In addition to tourism, the other major industries include one of the largest container ports in the world, servicing the eastern seaboard of the USA, and major drydocks for cruise ship refurbishing. 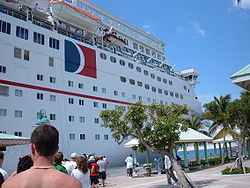 Picture of a Cruise Ship at Freeport Harbour