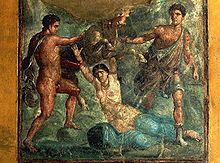 Amphion and Zethus subject Dirce to the bull (from the House of the Vettii, Pompeii)

Dirce (Ancient Greek: Δίρκη, pronounced Dirke, modern Greek pronunciation Dirki, meaning "double" or "cleft") was the wife of Lycus in Greek mythology, and aunt to Antiope whom Zeus impregnated. Antiope fled in shame to King Epopeus of Sicyon, but was brought back by Lycus through force, giving birth to the twins Amphion and Zethus on the way. Dirce hated Antiope, and treated her cruelly after Lycus gave Antiope to her; until Antiope, in time, escaped.

In Euripides' play Antiope, Antiope flees back to the cave where Amphion and Zethus were born, now living there as young men. They disbelieve her claim to be their mother and refuse her pleas for sanctuary, but when Dirce comes to find Antiope and orders her to be killed, the twins are convinced by the shepherd who raised them that Antiope is their mother. They kill Dirce by tying her to the horns of a bull.

Dirce was devoted to the god Dionysus. He caused a spring to flow where she died, either at Mount Cithaeron or at Thebes, and it was a local tradition for the outgoing Theban hipparch to swear in his successor at her tomb.[1] 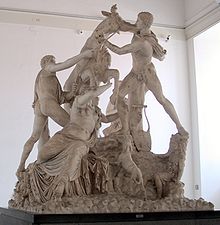 The death of Dirce is depicted in a marble statue, 1st Century AD Roman Copy of a 2nd century BC Hellenistic Greek original, known as the Farnese Bull, now in the collections of the National Archaeological Museum in Naples. The colossal piece was first excavated in the 16th century in the Baths of Caracalla. Some scholars identify it with the Dirce bull mentioned in Pliny's Natural History, but this is disputed.

"A Christian Dirce", by Henryk Siemieradzki.

This scene was apparently recreated in spectacles in the Roman arena. Clement, in his First Letter to the Corinthians, recounts how Christian women were martyred.