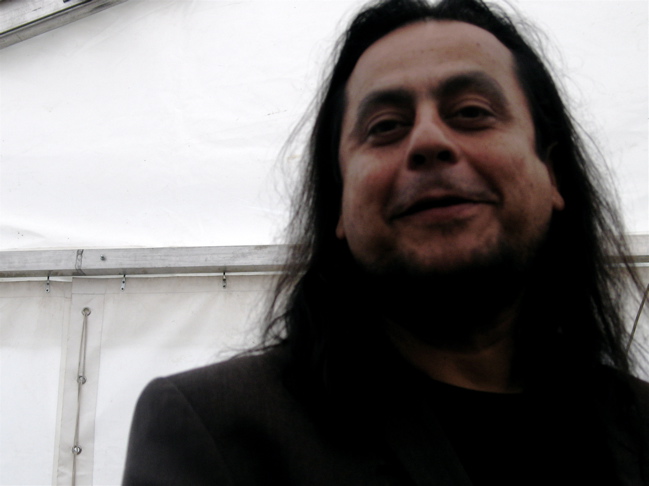 Humberto "Tito" Larriva is a Mexican/American singer, musician and actor.

Larriva was born in , , and grew up in and . As a child he learned to play the flute and violin. After considering , he moved to in the mid 1970s.

Larriva was the vocalist and rhythm guitarist for 1970s punk band , 1980s rock band , and . He formed The Plugz in Los Angeles, California in 1978. Though the band never succeeded commercially, their presence during the birth of West Coast punk has ensured their enduring influence on generation after generation of rock bands. Record label Rhino recognized their role in the Los Angeles music scene by including their version of "La Bamba" on "We're Desperate: The L.A. Scene (1976-79)." The Plugz released two albums, "Electrify Me" (1978) and "Better Luck" (1981). They also contributed three songs to the soundtrack and bassist Tony Marsico and drummer Chalo Quintana played with on in 1984.

After The Plugz broke up, Larriva and two other members of the band ( and ) formed the in 1984. They were joined on guitar by (formerly of ). The Cruzados were critically acclaimed and opened for big acts like and . They released a self-titled album album in 1985. In 1987 they released "After Dark" with new guitarist . The band broke up in 1988, but Larriva continued to work with the former members later in his career. Though he never worked with Rohner again, the debut album of Larriva's next band, Tito & Tarantula, featured Quintana and Marsico as guest musicians, and one song that was co-written by Marsico, along with another that was co-written by Hufsteter. On Tito & Tarantula's third album, Hufsteter co-wrote several songs, and later joined the band alongside Larriva once more.

Tito & Tarantula began as an improvisational jam band that incorporated sounds from whatever musician happened to stop by. "We've always had a sort of unspoken rule," Larriva said to the in 1997, [ [http://weeklywire.com/ww/12-15-97/tw_mus.html Music: Do-It-All Dude (Tucson Weekly . 12-15-97) ] ] "and the rule is that everyone plays pretty much what they want. The band never rehearses." The band started as far back as 1992, when Larriva and lead guitarist would perform in bars and cafes with a friends every week. The band made its debut on the soundtrack for 's movie Desperado, then in 1996, appeared on another soundtrack for one of Rodriguez's films, this time the film being , with Larriva, Atanasoff, and future drummer as the band performing in the bar. The next year, Tito & Tarantula released its long-awaited and highly-acclaimed debut album Tarantism in 1997. Their next album was released in 1999, titled , followed by in 2000. In 2002, the band was joined by Larriva's former bandmate . Later in the year, they released the album Andalucia. Since then, the band has toured consistently, and made numerous personnel changes, including the departure of Atanasoff. They are currently continuing to tour Europe, and their next album is expected in early 2007.

, composed of Larriva on vocals, 's rhythm section ( on bass, on drums) and on guitar, began as a recording session for in Los Angeles and ended as the album "Santa Sangre," released in 1999. [ [http://www.latinovision.com/BandPage.asp?LangID=spa&ArtistID=29 Psychotic Aztecs ] ]

Larriva's first acting role was "Hammy" on in 1981. He has gone on to play notable supporting roles in big-budget films like , Road House, , Desperado, and . He often works with his friend, director . His latest appearance was a few seconds cameo in Rodriguez' "Machete" trailer in "Grindhouse".

Apart from acting, Larriva has scored films including , , and .