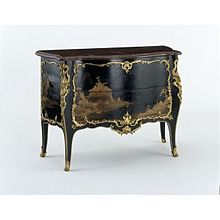 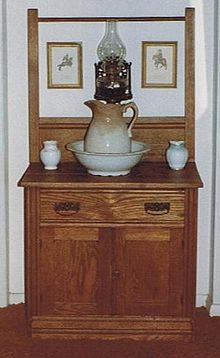 Commode with pitcher and towel rack. Typically, a chamber pot would be kept in the cabinet.

A commode, commode with legs, or commode on legs is any of several pieces of furniture. The word commode comes from the French word for "convenient" or "suitable", which in turn comes from the Latin adjective commodus, with similar meanings.

Originally, in French furniture, a commode introduced about 1700 meant a low cabinet, or chest of drawers at the height of the dado rail (à hauteur d'appui). A commode, made by an ébéniste (cabinet-maker) and applied with gilt-bronze mounts, was a piece of veneered case furniture much wider than it was high, raised on high or low legs[2] and with (commode à vantaux) or without enclosing drawers. The piece of furniture would be provided with a marble slab top[3] selected to match the marble of the chimneypiece. A commode occupied a prominent position in the room for which it was intended: it stood against the pier between the windows,[4] in which case it would often be surmounted by a mirror glass,[5] or a pair of identical commodes would flank the chimneypiece or occupy the center of each end wall. Bombé commodes, with surfaces shaped in three dimensions were a feature of the rococo style called "Louis Quinze". Rectilinear neoclassical, or "Louis Seize" commodes might have such deep drawers or doors that the feet were en toupie— in the tapering turned shape of a child's spinning top. Both rococo and neoclasical commodes might have cabinets flanking the main section, in which case such a piece was a commode à encoignures;[6] pairs of encoignures or corner-cabinets might also be designed to complement a commode and stand in the flanking corners of a room. If a commode had open shelves flanking the main section it was a commode à l'anglaise

Before the mid-eighteenth century the commode had become such a necessary commodity that it might be made in menuiserie, of solid painted oak, or walnut or fruitwoods, with carved decoration, typical of French provincial furniture.

In the English-speaking world, commode passed into London cabinet-makers' parlance by the mid-eighteenth century, to describe chests of drawers with gracefully curved fronts, and sometimes with shaped sides as well, perceived as being in the "French" taste. Thomas Chippendale employed the term "French Commode Tables" to describe designs in The Cabinet-Maker and Upholsterer's Director (1753), and Ince and Mayhew illustrated a "Commode Chest of drawers", plate xliii, in their Universal System of Household Furniture, 1759-62. John Gloag notes[7] that Commode expanded to describe any piece of furniture with a serpentine front, such as a dressing table, or even a chair seat.[8] Gloag points out that Thomas Shearer's designs for two "commode dressing chests" illustrated in The Cabinet-Makers' London Book of Prices, 1788, plate 17, are repeated, but as "serpentine dressing chests", in The Prices of Cabinet Work, 1797 edition.

A night commode is a Victorian term[9] for a bedside cabinet closed by one or paired doors, which offered an enclosed area below for storing a chamberpot that collected night soil and served as a washstand with a washbasin and water pitcher for personal cleansing after using the chamberpot.

A chamberpot enclosed in a cabinet of sitting height was called a close-stool; such convenience cabinets or commodes often furnished middle-class bedrooms before the days of indoor plumbing. In the twentieth century commode continued to be used as a euphemism for a toilet.