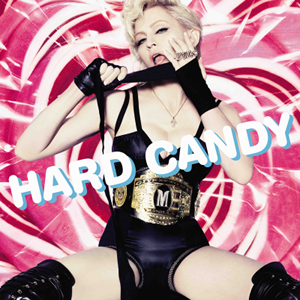 "Hard Candy" is the eleventh by American singer-songwriter Madonna and was first released on April 25, 2008

Madonna initially wanted the album to be called "Candy Shop", after an album track, but Warner Bros. disallowed the name, citing it as too close to the song by . She then wanted to call the album "", after the second single, but Warner Bros. again disallowed the name, citing it was too close to the song by , . In the end, she called the album "Hard Candy", as a "juxtaposition of toughness and sweetness".

The album, overall, has an urban vibe, while remaining a dance-pop record at heart.

The album features vocal appearances from , , and along with production credits from Timbaland, Timberlake, , and as well as co-production from Madonna. Additionally, "Hard Candy" includes a guest appearance of American and , best known for her work with Prince, contributing with guitars on the song "She's Not Me", on which she is mentioned.

To promote the album, Madonna embarked on the Hard Candy Promo Tour, the first venture as part of Madonna's new contract with concert promoters with media content provided by " LLC" . [cite press release |title=Madonna Live In New York — Official Press Release |publisher=Warner Bros. Records |date=2008-04-29 |url=http://madonna.com/news/news.php?uid=227 |format= |language= |accessdate=2008-08-02 |quote= ] The show consisted of a 40 minute set featuring six songs, with dates in , and . During the performance at the Roseland Ballroom in New York, accompanied Madonna onstage for the performance of "4 Minutes". also appeared on video screens during the performance of "Give It 2 Me". Alongside these and album tracks, "" and "Candy Shop", Madonna performed a rock-infused version "", featuring a few lines from "". "Music", was also remixed using a sample of 's "".

In an interview with the BBC, Madonna stated: [cite video |people=Madonna (performer), Jo Whiley (host) |date2=01 |month2=May |year2=2008 |title=Jo Whiley meets Madonna Part 1: Madonna talks about her live performance in New York and what people can expect at Radio 1's Big Weekend |url=http://www.bbc.co.uk/radio1/bigweekend/2008/artists/madonna/index.shtml#emp |format= Flash (streaming video)|medium=Interview |publisher=BBC |location=London, England |accessdate=2008-08-03 |time=2:40 |quote=I'm very excited about it... ] cquote|Obviously, I want to do new stuff because I'm very excited about it. I feel that's what people come to hear but I also want to do a few of my oldies but goodies. I chose Hung Up because that was the biggest hit from my last record and I chose Music because it's a crowd pleaser, it's anthemic and it brings people together.

The April 30 New York set was shown live via MSN in association with Control Room and . The May 10 Maidstone concert was shown live on and later a special program "Madonna Live at 's Big Weekend" was shown on , both including interview footage with . Highlights of the show were also shown all that week on Interactive. The Maidstone show caused controversy with Madonna's use of swearing causing complaints to be made to the BBC. [cite web|url=http://www.news.com.au/heraldsun/story/0,21985,23690062-5006024,00.html|title=Madonna shocks Radio 1 crowd with swear words and demands|date=2008-05-13|accessdate=2008-07-29|last=|first=|work=Herald Sun]

Further promotion of the album will include the , which started at the end of August 2008 with dates in Europe, North & South America in 2008.

The lead single, "4 Minutes", was released digitally on March the 18th, 2008 worldwide and was physically released in April 19, 2008. The single features and . It is currently the most successful release from the album, reaching #1 in twenty-four countries including the United World Chart and becoming one of Madonna's biggest-selling singles.

A promotional single of "Miles Away" was released on 17 July 2008 in Japan regions, where the song had increased Airplay and Digital Downloads.

The third single, "Miles Away" is going to be released to US radio on October 13th, but has already been played in many Canadian radio station already. So far there are no plans for the release of a video. Many think the video will include live footage from "Sticky & Sweet Tour" but nothing is officially planned.

The album was however still criticized for being "an attempt to harness the urban market",

During its first day of release in the Netherlands, "Hard Candy" sold over 60,000 copies, earning a platinum certification. The album also received a Gold certification on its first day of release, selling over 15,000 copies. [cite web|url=http://media.www.theloquitur.com/media/storage/paper226/news/2008/04/24/AE/hard-Candy.Cracks.The.Charts-3366841.shtml|title='Hard Candy" cracks the charts|date=2008-04-28|accessdate=2008-08-02|last=Michaluk|first=Christina|work=The Loquitur|publisher=mtvU] Furthermore, after only two days of release, Hard Candy debuted at number one on the French albums chart, selling 38.000 copies. It also debuted at number one on the weekly album chart in Japan, selling about 55,462 copies. [cite web|url=http://www.oricon.co.jp/search/result.php?kbn=ja&types=rnk&year=2008&month=5&week=2&submit5.x=19&submit5.y=15|title=検索結果-ORICON STYLE アーティスト/CD検索|accessdate=2008-08-02|work=Oricon]

"Hard Candy" also debuted at number one on the , where Madonna joined a selected group of artists to achieve ten number one albums, behind , with eleven, and , with fifteen. [ cite web | url=http://news.bbc.co.uk/2/hi/entertainment/7383141.stm | title=Madonna celebrates chart double | work= | publisher= | date=2008-05-04 | accessdate=2008-05-07 ] Madonna achieved a similar feat in , where it became her seventh album to reach number one on the . The album was certified gold in its first week. [cite web|url=http://www.ariacharts.com.au/pages/chartifacts.htm|title=Chartifacts — Week Commencing: May 4, 2008|date=2008-05-04|accessdate=2008-05-09|work=ARIA] "4 Minutes" has also remained in the Australian Top Ten for over eleven weeks.

According to , "Hard Candy" sold 100,000 copies in the United States upon its first day of release.

In "Hard Candy" debuted and peaked at number five and only managed to stay on the chart for nine weeks.

So far, "Hard Candy" has sold approximately 654,000 copies in the United States and over 3 million copies worldwide in just 5 months.

* CD — containing the 12-track album.
* CD Japanese Edition — 13-track edition including the bonus track "Ring My Bell".
* CD Limited Collectors Edition Candy Box — 14-track edition containing the album, two exclusive "4 Minutes" remixes in a hinged DVD-sized "Candy" box with a 16-page booklet and approximately 35 Starlite Mint candies packaged in clear cello bag. [cite web|url=http://www.play.com/Music/CD/4-/5345781/Hard-Candy/Product.html|title=Hard Candy (Special Edition w/ Starlite Mints Candy)|accessdate=2008-08-02|work=play.com]
* CD Philippine Edition — Disc available in blue ripple and a rare pink ripple (first pressing only).
* LP Limited Edition — full length 12-track album on two pink & white and blue & white "candy swirled" vinyl discs, plus a DJ Remix 12" (on black vinyl) with two exclusive-to-this set remixes of "4 Minutes" by Tracy Young and Peter Rauhofer, and a bonus CD of the album housed in a plain white cd sleeve, all housed in a three-pocket deluxe gatefold Stoughton jacket. A misprint was released in Europe mainly by the CD retailing store . The misprint consisted of the original album (like the USA release) on 3 vinyl discs, but the main color of the album itself was plain pink and plain blue respectively. This version of the album is highly desired by Madonna collectors everywhere and can range from $70-$100 on sites such as Ebay and [cite web|url=http://www.whatrecords.co.uk/items/46192.htm|title=Hard Candy Limited Edition Colured Vinyl 3LP Set + Bonus CD album|accessdate=2008-08-02|work=What Records]
* Deluxe Pre-order version — 16-track edition containing the album, two "4 Minutes" remixes, bonus track "Ring My Bell", digital booklet and a "Give It 2 Me" remix.
* iTunes Pre-order version — 13-track edition containing the album, digital booklet and bonus track "Ring My Bell".
* Deluxe Digital version — 15-track edition containing the album, two "4 Minutes" remixes, digital booklet and a "" remix.
* Digital version — 12-track edition containing the album and digital booklet.
* Vodafone Exclusive — from April 21, 2008, seven tracks from the album were released at a rate of one a day counting down the week before the album was available. Each track remained live for 24 hours for download before being replaced by the next one. [cite web|url=http://www.mad.co.uk/BreakingNews/BreakingNews/Articles/4567f4f41edc4552bbaf18e4d21b30bc/Madonna-to-release-album-on-Vodafone.html|title=Madonna to release album on Vodafone|date=2008-03-18|accessdate=2008-08-02|last=Varley|first=Melinda|work=mad.co.uk|publisher=Centaur Communications Ltd. ]