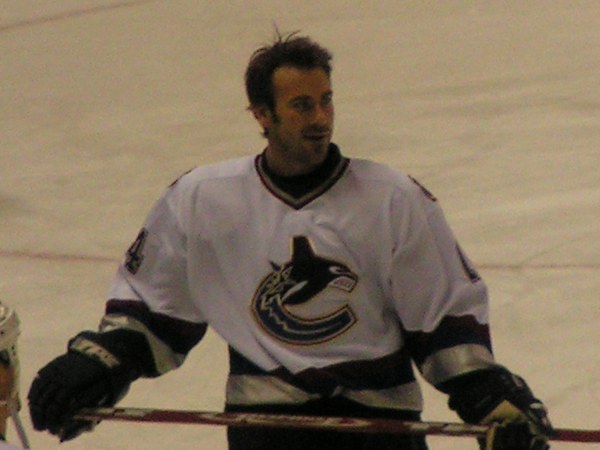 Geoff M. Sanderson (born , , in Hay River, ) is a Canadian professional winger currently without an NHL contract. His former team, the declined to sign him for the NHL 2008-09 season.

Drafted by the 36th overall in the , Sanderson made his NHL debut at the tail end of the 1990–91 season. After playing in 64 games in his first full season for the club in 1991–92, he registered career highs in goals (46), assists (43), and points (89) in 1992–93. Sanderson spent his first six NHL seasons with Hartford and played half a season with the franchise when they moved to Carolina. He was traded to the in January 1998 and a little over a month later was sent to the . He saw the most playoff action of his career during his three seasons with Buffalo, making it to the Stanley Cup Finals in 1998–99.

Left unprotected by Buffalo during the , Sanderson joined the and scored 30-plus goals in 2000–01 and 2002–03. He returned to Vancouver at the trade deadline in 2003–04 and was reclaimed by Columbus off waivers in the off-season which was a condition of the trade. Once the came to an end, Sanderson was traded two games into the 2005–06 season to the . After scoring 25 goals in 75 games with Phoenix, Sanderson signed a two-year contract with the in the off-season.

A disappointing year with Philadelphia resulted in Sanderson being traded to Edmonton with Joni Pitkanen in exchange for and former Flyers captain Jason Smith. Sanderson scored two goals against Philadelphia the first time he played against his former team.