The Linux Foundation (LF) is a non-profit technology consortium chartered to foster the growth of Linux.

Founded in 2007 by the merger of the Open Source Development Labs (OSDL) and the Free Standards Group (FSG), the Linux Foundation sponsors the work of Linux creator Linus Torvalds and is supported by leading Linux and open source companies and developers from around the world.

The Linux Foundation promotes,[3] protects,[4] and standardizes[5] Linux "by providing a comprehensive set of services to compete effectively with closed platforms."[6]

The Linux Foundation serves as a neutral spokesperson for Linux and generates original content that advances the understanding of the Linux platform. It also fosters innovation by hosting collaboration events among the Linux technical community, application developers, industry, and end users to solve pressing issues facing Linux. Through the Linux Foundation's community programs, end users, developers, and industry members collaborate on technical, legal, and promotional issues.

In order for Linux creator Linus Torvalds and other key kernel developers to remain independent, the Linux Foundation sponsors them so they can work full time on improving Linux. The Linux Foundation also manages the Linux trademark, offers developers legal intellectual property protection, and coordinates industry and community legal collaboration and education.

The Linux Foundation offers application developers standardization services and support that makes Linux an attractive target for their development efforts. These include: the Linux Standard Base (LSB) and the Linux Developer Network.

The Linux Foundation supports the Linux community by offering technical information and education through its annual events, such as the Linux Collaboration Summit, the Linux Kernel Summit, and the general LinuxCon event inaugurated in September 2009.

The Linux Foundation also provides services to key areas of the Linux community, including an open source developer travel fund and other administrative assistance. Through its workgroups, members and developers can collaborate on key technical areas. There is also a training program that is vendor-neutral, technically advanced, and created with the actual leaders of the Linux development community.

On March 3, 2009, the Linux Foundation announced that they would take over management of Linux.com, from its previous owners, SourceForge, Inc.

The site was relaunched on May 13, 2009, shifting away from its previous incarnation as a news site to become a central source for Linux tutorials, information, software, documentation and answers across the server, desktop/netbook, mobile, and embedded areas. It also includes a Linux software and hardware directory.

Much like Linux itself, Linux.com plans to rely on the community to create and drive the content and conversation.

As of September 2011, the Linux Foundation manages and governs only one open-source mobile platform, MeeGo.

In 2010 when Intel and Nokia jointly announced that they will be merging their Linux efforts into a new project MeeGo targeting a broader range of hardware devices, it was revealed that Linux Foundation would be hosting it. MeeGo is a merger of the Moblin (Intel) and Maemo (Nokia) projects.[7]

By the end of July 2011, there are more than 100 corporate members who identify with the ideals & mission of the Linux Foundation:

The Linux Developer Network is an online community for Linux application developers and independent software vendors who want to start or continue to develop applications for the Linux platform.

The Linux Foundation Training Program[8] features instructors and content straight from the leaders of the Linux developer community.

Attendees receive Linux training that is vendor-neutral, technically advanced and created with the actual leaders of the Linux development community themselves. The Linux Foundation Linux training courses, both online and in-person, give attendees the broad, foundational knowledge and networking needed to thrive in their careers.

The Linux Standard Base, or LSB, is a joint project by several Linux distributions under the organizational structure of the Linux Foundation to standardize the software system structure, or filesystem hierarchy, used with Linux operating system. The LSB is based on the POSIX specification, the Single UNIX Specification, and several other open standards, but extends them in certain areas.

According to the LSB:

The goal of the LSB is to develop and promote a set of open standards that will increase compatibility among Linux distributions and enable software applications to run on any compliant system even in binary form. In addition, the LSB will help coordinate efforts to recruit software vendors to port and write products for Linux Operating System.

The LSB compliance may be certified for a product by a certification procedure.[9]

The LSB specifies for example: standard libraries, a number of commands and utilities that extend the POSIX standard, the layout of the file system hierarchy, run levels, the printing system, including spoolers such as CUPS and tools like Foomatic and several extensions to the X Window System. 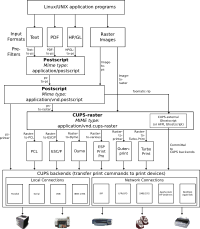 The OpenPrinting workgroup is a website belonging to the Linux Foundation which provides documentation and software support for printing under Linux. Formed as LinuxPrinting.org, in 2006 it became part of the Free Standards Group.

They developed a database that lists a wide variety of printers from various manufacturers. The database allows people to give a report on the support and quality of each printer, and they also give a report on the support given to Linux by each printer vendor. They have also created a foomatic (formerly cupsomatic) script which plugs into the Common Unix Printing System (CUPS).

The foundation's website, critical to its operations, was taken down on September 11th due to security concerns.[10] Since then, parts of the website have been brought back up, but major parts, including OpenPrinting[11], are still offline (as of 2011-11-5).