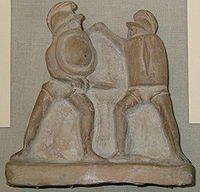 A Hoplomachus (pl. hoplomachi) (Greek: ὁπλομάχος) (hoplon meaning "shield" in Greek) was a type of gladiator in ancient Rome, armed to resemble a Greek hoplite (soldier with heavy armor and helmet, a round shield, a spear and a sword). The hoplomachus would wear a bronze helmet, a manica on his right arm, loincloth (subligaculum), heavy padding on his legs, and a pair of high greaves reaching to mid-thigh. His weapons were the spear and a short sword. He was often pitted against the murmillo (armed like a Roman soldier), perhaps as a re-enactment of Rome's wars in Greece and the Hellenistic East. The name hoplomachus means 'armored fighter'. The small, round shield was as much a weapon as a sword or spear, not unlike the original hoplites (who carried a larger shield), who used it primarily for defensive purposes, but also employed it in their charges, using it to ram their opponents at the onset of a fight.

His usual opponent was the murmillo but he might fight the thraex in exceptional cases. Some experts believe that it was one of two designations of Samnite, and that Samnites were called hoplomachi when battling a Thracian, and a secutor when matched against retiarii.[1]