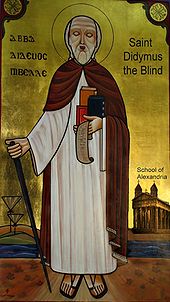 Didymus the Blind (c. 313 – 398) was a Coptic Church theologian of Alexandria, whose famous Catechetical School he led for about half a century. He became blind at a very young age, and therefore ignorant of the rudiments of learning. Yet, he displayed such a miracle of intelligence as to learn perfectly dialectics and even geometry, sciences which especially require sight.

Didymus wrote many works: Commentaries on all the Psalms, the Gospel of Matthew, the Gospel of John as Against the Arians, and On the Holy Spirit, which Jerome translated into Latin. He also wrote on Isaiah, Hosea, Zechariah, Job, and many other topics.[1] (See Jerome and Early Church Fathers, Chapter 109)

Didymus’ biblical commentaries (supposedly on nearly all the books of the Bible) survive in fragments only, and those on the Catholic Letters are of dubious authenticity. He is probably the author of a treatise on the Holy Spirit that is extant in Latin translation.

Although he became blind at the age of four,[2] before he had learned to read, he succeeded in mastering the whole gamut of the sciences then known. He was a loyal student of Origen, though stoutly opposed to Arian and Macedonian teaching. Such of his writings as survive show a remarkable knowledge of scripture, and have distinct value as theological literature. Among them are the De Trinitate (On the Trinity), De Spiritu Sancto (On the Holy Spirit) (Jerome's Latin translation), Adversus Manichaeos (Against the Manichaeans), and notes and expositions of various books, especially the Psalms and the Catholic Epistles.

Upon entering the service of the Church he was placed at the head of the Catechetical School of Alexandria, where he lived and worked. According to Palladius, the 5th-century bishop and historian, Didymus remained a layman all his life and became one of the most learned ascetics of his time. He counted among his pupils Jerome and Rufinus.

Universalist historians including Hosea Ballou and J. W. Hanson have claimed that Didymus taught universal salvation, on the basis of Didymus' statement that "in the liberation of all no one remains a captive! At the time of the Lord's passion the devil alone was injured by losing all of the captives he was keeping.", and his belief that divine punishment is remedial in nature.[3]

Jerome, who often spoke of Didymus not as the blind but as "the Seer," wrote that Didymus "surpassed all of his day in knowledge of the Scriptures" and Socrates of Constantinople later called him "the great bulwark of the true faith".[3] Didymus was viewed as an orthodox Christian teacher and was greatly respected and admired up until at least 553.[4]

In 553 the Second Council of Constantinople condemned his works but not his person. In the Third Council of Constantinople in 680, Didymus was again linked with and condemned with Origen. However, the doctrine of Origen and Didymus that was found to be the most "heretical" was not universalism, nor was it the reliance on the non canonical Gospel according to the Hebrews, nor even his belief that Matthew and Levi were two different people, but rather the belief in the "Abominable doctrine of the transmigration of souls".[3]

As a result of his condemnation, many of his works were not copied during the Middle Ages and were subsequently lost. However, a group of 6th or 7th century papyrus codices discovered in 1941 near Toura, Egypt (south of Cairo) include his commentaries on Job, Zechariah, Genesis, and (of uncertain authenticity) on Ecclesiastes and Psalms 20-46.[5]

Despite his blindness, Didymus excelled in scholarship because of his incredible memory. He found ways to help blind people to read, and experimented with carved wooden letters, a precursor to Braille systems used by the blind today[dubious – discuss][citation needed].

Several Orthodox Churches refer to him as St. Didymus the Blind.[6][7]

Didymus the Blind is portrayed in Flow Down Like Silver, Hypatia of Alexandria[1] by Ki Longfellow, a novel published in 2009.