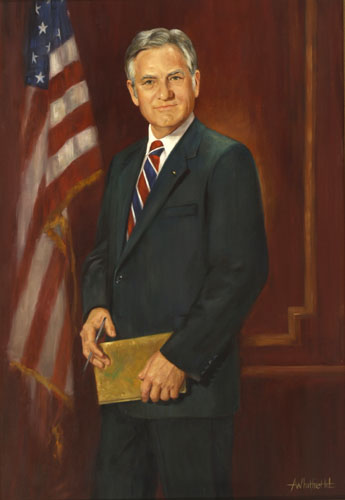 John Wayne Mixson, better known as Wayne Mixson (born , ) was the thirty-ninth governor of the of . He assumed the office in January 1987 after stepped down to take his seat in the , and served only three days until the governor-elect, , was sworn in. He also served as a Special Ambassador to , being appointed to this post by President in 1979

Born in , immediately after graduating from high school he moved to . He served in the during . Following the war, he attended and the . In 1947, he received a degree in Business Administration from the . Also in the same year, he married his wife, Margie Grace. His political career began with the , serving six consecutive terms. He chaired House Agriculture Committee for 8 years. Mixson was a full-time farmer during his tenure as state legislator and developed a reputation as pro-agruculture business legislator.

Mixson decided against seeking re-election to the State House in order to run for Lieutenant Governor. He won the primary running on a ticket headed by gubernatorial nominee . They were elected in 1978 and re-elected in 1982, which made Mixson the first Lieutenant Governor of Florida to be elected more than once to that position. During his second term, he also served as Florida's Secretary of Commerce, being appointed by Gov. Graham to this role.Mixson decided to retire from active political life with end of his term as Lt. Governor and did not seek to succeed Graham as Governor. State representative became the Democratic nominee in 1986, but lost to Republican .

Mixson would become Graham's successor after all, however briefly, after Graham was elected to the . Florida's "resign-to-run" law requires an incumbent office holder seeking another elective office to submit an irrevocable resignation from the office he or she currently holds unless that tenure would end anyway before he or she would assume the new position if elected. The candidate may designate the effective date of the resignation to be in the future, but it must be no later than the date that he or she would assume the new office he or she is seeking. For this reason, Graham was compelled to submit his resignation as Governor early in 1986 when he began to campaign for the U.S. Senate seat. He chose January 3, 1987 as the effective date of his resignation, as that was the date new Senators would be sworn in. The term as Governor to which he had been elected in 1982 would not end, however, until January 6, 1987.

This sequence of events left Mixson to assume the office of Governor for just those three overlapping days. Even if Graham had lost the Senate race, his prior resignation as Governor could not have been withdrawn under Florida law, so Mixson would still have become Governor on and served out the remaining days of the term to which Graham had been elected. By virtue of his holding office for three days, Mixson is (as of 2008) the oldest Governor of Florida who is still alive.

He has also endorsed some other Republican candidates, including and