Union Station is a major train station that opened in 1925 in Chicago, replacing an earlier 1881 station. It is now the only intercity rail terminal in Chicago, as well as being the city's primary terminal for commuter trains. The station stands on the west side of the Chicago River between Adams Street and Jackson Street, just outside the Chicago Loop. Including approach and storage tracks, it is about nine and a half city blocks in size. Its facilities are mostly underground, buried almost entirely beneath streets and skyscrapers.

Union Station is laid out with a double stub-end configuration, with a total of 24 tracks coming in to the station from either the north or south, but generally not connecting. Between the north and south sides of the station is a passenger concourse. Passengers can walk through the concourse to get from any platform to any other without stairs or elevators. Odd-numbered tracks (1-17) are on the north half of the station, and even-numbered tracks (2-28) on the south half. The northern platforms are used for Amtrak services to Milwaukee and Seattle; and the Metra Milwaukee District West, Milwaukee District North and North Central Service lines; the southern platforms are used for the rest of the Amtrak and Metra services. Two dispatching centers, known as the glasshouses, one on each side of the terminal, control the flow of traffic in and out of the station.

Inside the concourse are ticket counters for both Metra and Amtrak services, as well as three waiting rooms and a baggage claim for Amtrak passengers, a set of restrooms, and offices for Metra and Amtrak. The concourse also has a mezzanine level between platform and street level, containing a food court featuring local vendors as well as national chains. 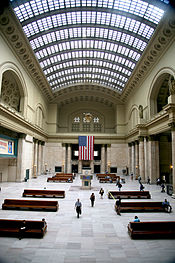 Located west of Canal Street, Union Station's headhouse occupies an entire city block. At its center is the Great Hall, a 110-foot (34 m)-high atrium capped by a large barrel-vaulted skylight. Arrayed around the Great Hall are numerous smaller spaces containing restaurants and services, and a wide passageway leading to the concourse. Above the headhouse are several floors of office space, currently used by Amtrak. Original plans called for many more floors of offices, forming a skyscraper above the Great Hall. This was never completed, although the plan has been revived in recent years.

Numerous entrances provide access to Union Station's underground platform level. The main entrance is on Canal Street opposite the headhouse, but passengers can also reach the platforms directly from the headhouse via an underground passageway. Two secondary entrances are located in Riverside Plaza near the Jackson Boulevard and Adams Street bridges. On Madison Street, directly across from Ogilvie Transportation Center, are a set of entrances to the north platforms.

The current Union Station is the second by that name built in Chicago, and possibly the third rail station to occupy the site. The need for a single, centralized station was an important political topic in 19th and 20th-century Chicago,[5] as various competing railroads had built a series of terminal stations. The numerous stations and associated railyards and tracks surrounded the city's central business district, the Loop, and threatened its expansion. The various stations also made travel difficult for through-travelers, many of whom had to make inconvenient, long, and unpleasant transfers from one station to another through the Loop.

On December 25, 1858 the Pittsburgh, Fort Wayne and Chicago Railroad opened as far as Van Buren Street in Chicago. It built the first station at what would eventually become today's Union Station on the west bank of the Chicago River.

On April 7, 1874 five railroads agreed to build and share a union station just north of the original Pittsburgh, Fort Wayne, and Chicago Railroad station site at Van Buren Street. These railroads were:

The remaining four original companies used the station when it opened in 1881. The headhouse of the Union Depot, a narrow building, fronted onto Canal Street and stretched from Madison Street to Adams Street.[6] Tracks led into the station from the south, and platforms occupied a strip of land between the back of the headhouse and the bank of the Chicago River. South of the station, Adams, Jackson, and Van Buren Streets rose over the tracks and the river on bridges.

Growth in passenger traffic, as well as a civic push to consolidate numerous railroad terminals, led to a proposal for an enlarged Union Station on the same site. The second Union Station would be built by the Chicago Union Station Company. This was a new company formed by all the railroads that had used the first station, save for the Chicago and Alton, which became a tenant in the new station.

The architect was Daniel Burnham of Chicago, who died before its completion. The firm of Graham, Anderson, Probst and White completed the work to Burnham's designs. Work began on the massive project in 1913, and the station finally opened twelve years later on May 16, 1925; some viaduct work continued into 1927. Construction was delayed several times by World War I, labor shortages and strikes. It is one of about a dozen monumental Beaux-Arts railroad stations that were among the most complicated architectural programs of the era called the "American Renaissance", combining traditional architecture with engineering technology, circulation patterning and urban planning.

Union Station was hailed as an outstanding achievement in railroad facility planning. The station's ornate Beaux-Arts main waiting room, the "Great Hall", is one of the great interior public spaces in the United States. It has vaulted skylight, statuary, and connecting lobbies, staircases, and balconies. Enormous wooden benches were arranged in the room for travelers to wait for connections, and two specially-designed underground taxicab drives were built to protect travelers from the weather. The station featured a large, open concourse along the river, with massive steel arches holding up the roof, and several stairways leading passengers down to the platform.

The large amount of land above the tracks and platforms has tempted property owners and developers. Possibly inspired by the "Terminal City" built atop New York's Grand Central Terminal, Chicago moved to develop the air rights above Union Station's tracks. The first building to be built was that of the Chicago Daily News in 1929. Designed in the Art Deco style, it was the first structure to add a public promenade along the river, which would be named "Riverside Plaza". Soon after, in 1932, the new Chicago Main Post Office opened. Also in the Art Deco style, it was a gigantic structure that occupied two full city blocks.

The Great Depression and subsequent World War II halted development, but in the 1960s, work began on Gateway Center, a Modernist complex of five buildings. Only the first four were built, and construction lasted into the 1980s through several economic cycles.

Most recently, in 1990 the Morton International Building opened. Now named for Boeing, it is the tallest building yet to be constructed over the tracks. It received awards for its innovative engineering.[7] Several sites remain above the tracks to be developed.

During World War II, Union Station was at its busiest, handling as many as 300 trains and 100,000 passengers daily, many of them soldiers. After the war, however, traffic both at Union Station and on the American passenger rail system declined severely with the growth of highway construction and private ownership of automobiles. In 1969 the expansive Beaux-Arts concourse at Union Station was demolished to make way for a modern office tower. A new, modernized (but smaller) concourse was constructed beneath the tower.

In 1991, this concourse was renovated[8] by Lucien Lagrange Associates. Included was a renovation of the Great Hall, and the restoration of the skylight, which had been blacked-out during the war and not restored. Restoration of Union Station continues. Numerous spaces within the station have yet to be renovated, and many sit unused, especially within the headhouse.

Due to security concerns following the September 11 attacks, the pair of taxicab drives was closed by Amtrak. Passenger traffic has increased and is exceeding the capacity allowed by the 1991 renovation.[9] Numerous improvements have been planned to accommodate the expected growth in passengers from the planned high-speed trains of the proposed Chicago Hub Network.

In 2010, Amtrak (the current owners of the Chicago Union Station Company) announced that the Great Hall would become air-conditioned for the first time.[10] That year a Chicago Tribune investigation revealed high levels of diesel soot on the underground platforms of Union Station.[11] Metra established an "Emissions Task Force" to study this problem and recommend solutions to improve air quality in the underground areas.[12] 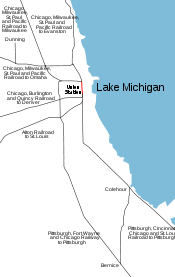 Prior to Penn Central and Amtrak's consolidation of downtown terminals, Union Station was already served by lines in all directions.

Union Station served as a terminal for the following lines and intercity trains:

Chicago and Alton/Gulf, Mobile and Ohio

Some of these trains and their names have survived to present Amtrak services, such as the Empire Builder, the California Zephyr, and the Hiawatha.

The name Ann Rutledge was used by Amtrak as a Chicago-St. Louis-Kansas City route until a name and service consolidation in 2009. There is also a Lincoln Service that operates in Illinois. See also: Ann Rutledge; Illinois Service; Missouri Service.

Passengers may connect to either O'Hare International Airport or Midway International Airport by using nearby CTA stations. They can connect to General Mitchell International Airport (Milwaukee) via Amtrak's Hiawatha service. For O'Hare, passengers walk to the any of the nearby Loop stations and travel to Clark/Lake for a connection to the Blue Line, which operates 24 hours a day (alternately, the Blue Line's Dearborn Street stops are a few blocks away from several of Union Station's entrances, or the Clinton/Congress station is two blocks southwest of the station). In addition, the Metra North Central Service offers 11 trains daily directly from Union Station to O'Hare Transfer station, where passengers may connect with the Airport Transportation System serving all terminals. For Mitchell (Milwaukee), passengers can take the Hiawatha Amtrak route, which runs directly to the Milwaukee Airport seven times a day. For Midway, passengers walk to the Quincy/Wells CTA station and take the Orange Line.