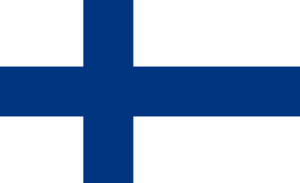 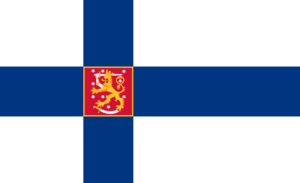 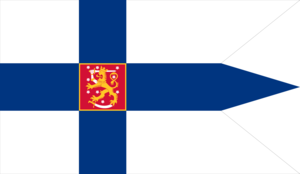 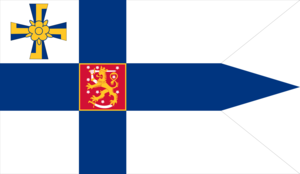 Nickname4 = The flag of the President of the Republic of Finland
Use4 =
Proportion4 = 11:19
Adoption4 = 1918
Design4 = Sea-blue on white field, rectangular (colors gold and silver on red), swallow-tailed, Cross of Liberty in canton (colors gold on blue)

The flag of , also called "Siniristilippu" ("Blue Cross Flag"), dates from the beginning of the 20th century. It features a blue on a white background. Blue represents lakes and the sky, and white represents snow and the white nights of the Finnish summer. The state flag has a coat of arms in the centre, but is otherwise identical to the civil flag. The swallow-tailed state flag is used by the military. The presidential standard is identical to the swallow-tailed state flag but also has in its upper left corner the Cross of Liberty after the , which has the President of Finland as its Grand Master.Like Sweden's, Finland's national flag is based on the Scandinavian cross. It was adopted after independence from Russia, when many patriotic Finns wanted a special flag for their country, but its design dates back to the 19th century. The blue coloring is said to represent the country's thousands of lakes and the sky, with white for the snow that covers the land in winter. This color combination has also been used over the centuries in various Finnish provincial, military, and town flags.

As a coincidence, the flag of Finland is the same as the with the colours reversed.

The current blue-crossed design was first used in Finland by Nyländska Jaktklubben, a founded in in 1861. In addition to the blue cross on the white background, the yacht club flag had the crowned arms of the province of within two crossed branches in the upper hoist quarter. Except for the position of the cross, the flag was similar to the flag of the , founded the previous year. The design can be traced to the , which has a blue cross on a white background.

Shortly after Finland gained independence in 1917, a competition was held for the design of the Finnish flag. Several different designs were submitted. Regarding the colours, the entries fell mainly into two categories - one using the red and yellow from the Finnish coat of arms, and the other using the present blue and white colours.

One entry had the Dannebrog cross design, but with a yellow cross on a red background. Another entry had diagonal blue and white stripes, but it was criticized as being more suitable for a than a newly-independent country.

Under Finnish law, the ratio of the flag is 11:18 (height:width). The swallow-tailed state flag is one unit longer and the tails are five units long. The cusp width of the blue cross is three units of measure. When flown from a flagpole, the flag is recommended to have a width equalling one sixth of the height of the pole.

The Finnish flag is used in three main variants. The usual national flag is used by all citizens, organizations and Finnish municipalities and regions. Anyone is allowed to fly the national flag whenever they deem it suitable. [ [http://www.finlex.fi/fi/laki/ajantasa/1978/19780380 "Laki Suomen lipusta" (380/1978)] . 4 §. Retrieved 10-3-2007. fi}] The rectangular state flag is used by [ [http://www.finlex.fi/fi/laki/ajantasa/1978/19780380 "Laki Suomen lipusta" (380/1978)] . 5 §. Retrieved 10-3-2007. fi}] bodies of the Finnish national and provincial governments (except the police and the district courts), by the Cathedral Chapters of the two national churches (Evangelical Lutheran and Orthodox), and non-naval vessels of the state.

The swallow-tailed national flag, which is also the naval ensign, is flown by the . The presidential standard and the command signs of the Minister of Defence, Chief of Defence, and Commander of the Finnish Navy are flown only by the respective persons.

The Finnish flag is raised at 8 AM and lowered at sunset, however not later than 9 PM. On independence day, the flag is flown until 8 PM regardless of the dark. On the occasion of great national tragedies, the ministry of interior may recommend flying the flag at throughout the country.

There is no official RGB definition for the colors. The blue color is called "sea blue", which is a dark to medium blue. It is not very dark , and certainly not any bright or greenish shade such as turquoise or .

Red and yellow are used in the coat of arms that appears on the state flag.

By Finnish law it is forbidden to deface the flag or to use it in a disrespectful way. It is also illegal to remove a flag from the pole without permission. Anyone who breaks these regulations may be fined for disgracing the flag.

Finnish law also forbids the use of the presidential standard or state flag without permission, as well as the addition of any extra symbols to the flag. One may not sell a flag which has different colours or geometry than defined by the law. These are considered violations of the flag regulations and can lead to a fine.

There are also common rules on how to treat the flag respectfully. The flag must not be dirty or damaged. The flag must never touch the ground. When the flag is washed, it must be dried indoors. A worn-out flag must be disposed of by burning (though not with the intent to disgrace it), or alternatively by cutting it to pieces small enough not to be recognizable as parts of the flag. The flag must not be buried in the ground or the sea (including not throwing it into the garbage).

A Finnish specialty is that any club registered in Finland may apply to have a flag with the club emblem officially approved for use on yachts. Such an ensign will be the civil ensign with a white cross, 3/5 of a unit wide, superimposed on the blue cross and with the club emblem in the upper hoist corner. Most yachting clubs distribute these ensigns to their members, and they are much used, but their use is not recommended outside Finnish waters to avoid confusion. Officially, however, the yachting club ensign is valid even for international use. [ [http://www.finlex.fi/fi/laki/ajantasa/1978/19780380 "Laki Suomen lipusta" (380/1978)] . 4.2 §. Retrieved 10-3-2007. fi}]

* The Finnish Flag was recently selected, celebrating its 90th anniversary, as the main motif for a high value commemorative coin, the €10 90th Anniversary of the Finnish Flag commemorative coin, minted in 2008. The obverse shows the dignified Finnish flag with the blue cross in full color in the midst of other flags. The reverse depicts Finnish nature as a cross design, representing the flag.

* [http://www.intermin.fi/intermin/home.nsf/pages/16ADD0A460A3D711C2256B64005E6D4D?opendocument Finland Ministry of the Interior: The Flag and Arms of Finland]
*FOTW|id=fi|title=Finland