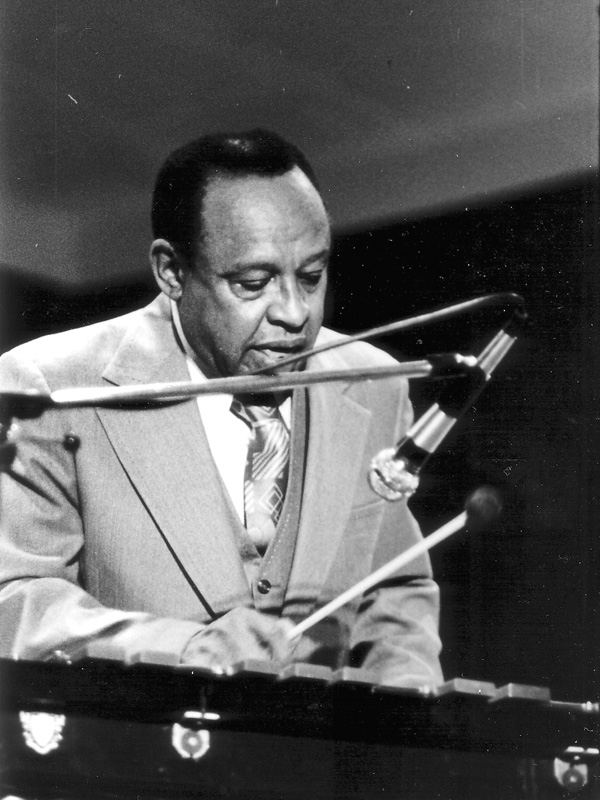 Lionel Leo Hampton (, &ndash;, ), was an American , , and . Like , he was one of the first jazz players. Hampton ranks among the great names in jazz history, having worked with a who's who of s, from and to and . In 1992, he was inducted into the .

Hampton began his career playing drums for the Chicago Defender Newsboy's Band while still a teenager in Chicago, a group that was led by a Major N. Clark Smith. He moved to in 1927 or 1928, playing drums for the Dixieland Blue-Blowers. He made his recording debut with The Quality Serenaders led by Paul Howard, then left for and drummed for the band at Sebastian's Cotton Club. During this period he began practicing on the . In 1930 came to California and hired the Les Hite band, asking Hampton if he would play vibes on two songs. So began his career as a vibraphonist, popularizing the use of the instrument ever since. ["Ibid"; Yanow, Scott]

While working with the Les Hite band, Hampton also occasionally did some performing with Nat Shilkrer and his orchestra. During the early 1930s he studied music at the . In 1934 he led his own orchestra, and then appeared in the 1936 film "Pennies From Heaven" alongside Louis Armstrong (wearing a mask in a scene while playing drums). [cite book| last = Britt| first = Stan| authorlink = Stan Britt| title = Dexter Gordon: A Musical Biography | publisher = Da Capo Press| date = 1989| page = 31| doi = | isbn = 0306803615]

Hampton's orchestra became very popular during the 1940s and early 1950s. His third recording with them in 1942 produced a classic version of "Flying Home", featuring a solo by that paved the way for . The selection became very popular, and so in 1944 Hampton recorded "Flying Home, Number Two" featuring . The song went on to become the theme song for all three men. Guitarist first joined Hampton in 1944, and would perform and record with him almost continuously through the late 1970s. ["Billy Mackel", "The New Grove Dictionary of Jazz". ed. Barry Kernfeld, 1988.] In 1947 he recorded Stardust at a "Just Jazz" concert with and .

Hampton's band played in a jazz, merged with rhythm & blues vein from around 1945 to the early 1950s. Represented in recordings on , the band included performers that achieved renown in their own right in the 1950s and 1960s, composer and bassist , saxophonist , guitarist , vocalist and keyboardist . Other noteworthy performers in the orchestra then included trumpeters Dizzy Gillespie, , and , trombonist and saxophonists Illinois Jacquet and .

In 1953 the orchestra toured with , , and in his lineup; was arranger/ and sang. Hampton continued to record with small groups and jam sessions during the 1940s and 1950s, with groups including , and among others. ["Ibid"; Yanow, Scott. Swing - The Third...] . In 1955 he was in California working on he was able to record sessions with and Art Tatum as well as with his own big band.

During the 1960s the public success of Hampton-led groups began to decline. The times were changing, and he was still performing what worked for him during the 1930s, 1940s, and 1950s. He did not fare much better in the 1970s, though he recorded actively on the Who's Who Record label. ["Ibid"; Yanow, Scott. Swing - The Third...]

Beginning in February 1984, Hampton and his band played at the 's annual jazz festival, which was renamed the the following year. In 1987 the UI's school of music was renamed for Hampton, the first university music school named for a jazz musician.

Hampton remained active until a stroke in Paris in 1991 forced him to collapse on stage. That incident, combined with years of chronic , forced him to cut back drastically on performances. However, he did play at the in 2001 shortly before his death. ["Ibid"; Yanow, Scott. Swing - The Third...] ["Ibid"; Voce, Steve]

Lionel Hampton died from on at Mount Sinai Hospital in , and is interred in the Woodlawn Cemetery, . His funeral was held on , and featured a performance by and David Ostwald's Gully Low Jazz Band at in ; the procession began at in . [cite web| title = Funeral Services for Lionel Hampton| url=http://query.nytimes.com/gst/fullpage.html?res=9D02E0DF143EF936A3575AC0A9649C8B63&scp=1&sq=Funeral+Services+for+Lionel+Hampton&st=nyt| accessdate = 2008-04-09]

Hampton was deeply involved in the construction of various projects, and founded the Lionel Hampton Development Corporation. Construction began with the Lionel Hampton Houses in in the 1960s, with the help of then Republican governor . Hampton's wife—Gladys Hampton—also was very involved in construction of a housing project in her name—the Gladys Hampton Houses. Gladys died in 1971. In the 1980s, Hampton built another Housing project called Hampton Hills in . Hampton was a staunch Republican and served as a delegate to several s during his lifetime. [cite book| last = Jackson| first = Jeffrey H.| authorlink = | title = Music And History: Bridging The Disciplines | publisher = | date = 2005| page = p.102| doi = | isbn = 1578067626] He served as Vice-Chairman of the New York Republican County Committee for some years [cite web| last = | first = | title = Paid Notice: Deaths HAMPTON, LIONEL| url=http://query.nytimes.com/gst/fullpage.html?res=9D00E4DD1731F933A2575AC0A9649C8B63&n=Top%2fReference%2fTimes%20Topics%2fPeople%2fH%2fHampton%2c%20Lionel| accessdate = 2007-06-03 ] and also was a member of the New York City Human Rights Commission. ["Ibid"; Voce, Steve]