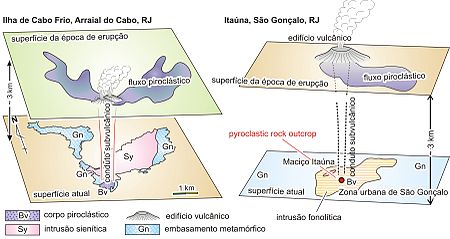 In geology, denudation is the long-term sum of processes that cause the wearing away of the earth’s surface leading to a reduction in elevation and relief of landforms and landscapes. Endogenetic processes such as volcanoes, earthquakes, and plate tectonics uplift and expose continental crust to the exogenetic denudation processes of weathering, erosion, and mass wasting.

Denudation incorporates mechanical, biological and chemical processes of erosion, weathering and mass wasting. Denudation can involve the removal of both solid particles and dissolved material. These include sub-processes of cryofracture, insolation weathering, slaking, salt weathering, bioturbation and anthropogenic impacts.[1]

Modern denudation estimates are usually based on stream load measurements taken at gauging stations. Suspended load, bed load, and dissolved load are included in measurements. The weight of the load is converted to volumetric units and the load volume is divided by the area of the watershed above the gaging station. The result is an estimate of the wearing down of the Earth's surface in inches or centimeters per 1000 years.[2] In most cases no adjustments are made for human impact, which causes the measurements to be inflated.[3]

Denudation rates are usually much lower than the rates of uplift. The only areas at which there could be equal rates of denudation and uplift are active plate margins with an extended period of continuous deformation.[4]

Early studies prompted the formation of denudation cycle hypotheses to describe land formations. Although at present they are mostly discounted, many of these models are enduring due to their simplicity and seemingly obvious assumptions.

In the 1890s W. M. Davis proposed a cycle of 'wearing down' in which so called 'young' landscapes had high gradients and elevations, and waning, low elevation topography through middle age to old age. Landscapes of Britain and Wales were thought to reflect these multiple peneplanation and rejuvenation cycles, such as the 3,000-foot remnant summit plateau in North Wales. A number of assumptions of fluvial and glacial dynamics in temperate areas were made in the formation of this model.

Such theories were proposed before tectonic theory was largely understood, and therefore are now largely discredited.

In medicine, denudation refers to the loss of surface layers, such as the epithelium.