Masanobu Fukuoka (福岡 正信, Fukuoka Masanobu?, 2 February 1913 – 16 August 2008) was a Japanese farmer and philosopher celebrated for his Natural Farming method and re-vegetation of desertified lands. He was a proponent of no-till, no-herbicide grain cultivation farming methods traditional to many indigenous cultures,[1] from which he created a particular method of farming, commonly referred to as "Natural Farming" or "Do-Nothing Farming".[2][3][4]

He was the author of several Japanese books, scientific papers and other publications, and was featured in television documentaries and interviews from the 1970s onwards.[5] His influences went beyond farming to inspire individuals within the natural food and lifestyle movements. He was an outspoken advocate of the value of observing nature's principles.[6]

Fukuoka was born on 2 February 1913 in Iyo, Ehime, Japan, the second son of Kameichi Fukuoka, an educated and wealthy land owner and local leader. He attended Gifu Prefecture Agricultural College and trained as a microbiologist and agricultural scientist, beginning a career as a research scientist specialising in plant pathology. He worked at the Plant Inspection Division of the Yokohama Customs Bureau in 1934 as an agricultural customs inspector. In 1937 he was hospitalised with pneumonia, and while recovering he stated that he had a profound spiritual experience that transformed his world view[7][8][9] and led him to doubt the practices of modern "Western" agricultural science. He immediately resigned from his post as a research scientist, returning to his family's farm on the island of Shikoku in southern Japan.

From 1938, Fukuoka began to practise and experiment with new techniques on organic citrus orchards and used the observations gained to develop the idea of "Natural Farming". Amongst other practices, he abandoned pruning an area of the citrus trees, which caused the trees to become affected by insects and tangled branches. He stated that the experience taught him the difference between nature and non-intervention.[10][11] His efforts were interrupted by World War II, during which he worked at the Kōchi Prefecture agricultural experiment station on subjects including farming research and food production. 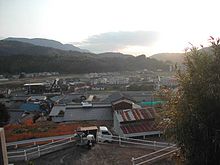 In 1940, Fukuoka married his wife Ayako and over his life they had five children together. After the war, his father lost most of the family lands due to forced redistribution by the Supreme Commander of the Allied Powers and was left with only three-eighths of an acre of rice land and the hillside citrus orchards his son had taken over before the war. Despite these setbacks, in 1947 he took up natural farming again with success, using no-till farming methods to raise rice and barley. He wrote his first book Mu: The God Revolution, or Mu: Kami no Kakumei (無 神の革命) in Japanese, during the same year and worked to spread word of the benefits of his methods and philosophy. His later book, The One-Straw Revolution was published in 1975 and translated into English in 1978.

From 1979, Fukuoka travelled the world extensively, giving lectures, working directly to plant seeds and re-vegetate areas, and receiving a number of awards in various countries in recognition of his work and achievements. By the 1980s, Fukuoka recorded that he and his family shipped some 6,000 crates of citrus to Tokyo each year totalling about 90 tonnes.[9]

During his first journey overseas, Fukuoka was accompanied by his wife Ayako, met macrobiotic leaders Michi Kushi and Herman Aihara,[12]:63 and was guided by his leading supporter and translation editor Larry Korn. They sowed seeds in desertified land, visited the University of California in Berkley and Los Angeles, the Green Gulch Farm Zen Center, the Lundberg Family Farms, and met with United Nations UNCCD representatives including Maurice Strong, who encouraged Fukuoka's practical involvement in the "Plan of Action to Combat Desertification". He also travelled to New York and surrounding areas such as Boston and the Amherst College in Massachusetts.

In 1983, he travelled to Europe for fifty days holding workshops, educating farmers and sowing seeds. In 1985, he spent forty days in Somalia and Ethiopia, sowing seeds in areas of desert to re-vegetate them, including working in remote villages and a refugee camp. The following year he returned to the United States, speaking at three international conferences on natural farming[12]:343 in Washington state, San Francisco and at the Agriculture Department of the University of California, Santa Cruz. Fukuoka also took the opportunity to visit farms, forests and cities giving lectures and meeting people. In 1988, he lectured at the Indian Science Congress, state agricultural universities and other venues.

Fukuoka went to Thailand in 1990 and 1991, visiting farms and collecting seeds for re-vegetating deserts in India which he returned to during November and December of the same year to sow seeds in the deserts[where?] for two months in an attempt to re-vegetate them. The next year saw him participate in official meetings in Japan associated with the Rio Earth Summit being held in Brazil, and in 1996 he returned to Africa, sowing seeds in desert areas of Tanzania, observing Baobab trees and jungle country. He taught the making and sowing of clay seed balls in Vietnam during 1995 and attended the World Expo 2005 in Aichi Prefecture, Japan.[13]

He travelled to the Philippines in 1998, carrying out Natural Farming research, and visited Greece later that year to assist plans to re-vegetate 10,000 hectares around the Lake Vegoritis area in the Pella Prefecture and to produce a film of the major seed ball effort. The next year he returned to Europe, visiting Mallorca.

He visited China in 2001, and in 2002 he returned again to India to speak at the "Nature as Teacher" workshop at Navdanya Farm and at Bija Vidyapeeth Earth University in Dehra Dun, Uttarakhand in northern India. On Gandhi's Day, he gave the third annual Albert Howard Memorial Lecture to attendees from all six continents. That autumn he was to visit Afghanistan with Yuko Honma but was unable to attend, shipping eight tons of seed in his stead. In 2006 he appeared in an hour long interview on Japanese television network NHK.[14]

Masanobu Fukuoka died on 16 August 2008, at the age of 95, after a period of confinement in bed and in a wheelchair.

Fukuoka called his agricultural philosophy shizen nōhō (自然農法?), most commonly translated into English as "Natural Farming".[15] It is also referred to as "the Fukuoka Method", "the natural way of farming" or "Do-Nothing Farming", despite being labor intensive.

The system is based on the recognition of the complexity of living organisms that shape an ecosystem and deliberately exploiting it. Fukuoka saw farming not just as a means of producing food but as an aesthetic and spiritual approach to life,[16] the ultimate goal of which was "the cultivation and perfection of human beings".[17]

The five principles of Natural Farming[18] are that:

Fukuoka re-invented and advanced the use of clay seed balls. Clay seeds balls were originally an ancient practice in which seeds for the next season's crops are mixed together, sometimes with humus or compost for microbial inoculants, and then are rolled within clay to form into small balls. This method is now commonly used in guerilla gardening to rapidly seed restricted or private areas.[20]

In 1988, Fukuoka received India's most prestigious award, the Desikottam Award [21] as well as the Ramon Magsaysay Award for Public Service in the Philippines',[22] often considered "Asia's Nobel Prize".[23]

In March 1997, the Earth Summit+5 forum in Rio de Janeiro elected to award him with the Earth Council Award,[citation needed] which he received in person at a ceremony in Tokyo on May 26 that year,[24] honoring him for his contributions to sustainable development.[21]

In 1998, Fukuoka received a grant of US$10,000 from the Rockefeller Brothers Fund but the grant was returned because his advanced age prevented him from completing the project.[25]

In the preface to The One Straw Revolution, Wendell Berry wrote that the Natural Farming system would not be directly applicable to most American farms. In fact, Fukuoka’s techniques have proved difficult to apply, even on most Japanese farms, and is too technically demanding for most people to follow.[26] Despite this, in the international development of the organic farming movement, Fukuoka is considered to be amongst the "five giant personalities who inspired the movement" [27] along with Austrian Rudolf Steiner, German-Swiss Hans Müller, Lady Eve Balfour in the United Kingdom and J.I. Rodale in the United States.

One Straw Revolution has been translated into over 20 languages and sold more than one million copies [28] and Fukuoka has been widely influential, inspiring an international movement of individuals investigating and applying his principles to varying degrees,[4] such as Akinori Kimura,[26][29] David Mas Masumoto,[30] Kawaguchi Yoshikazu, and has significantly influenced alternative movements in the West, such as permaculture.[31][32]

His books are considered both farming compendiums and guides to a way of life.[33] His influence likened to that of a "strict and authoritarian grandfather figure" having a tendency to "theorize in a grand way" but not always be practical.[26] Fukuoka theorized that any ecological system forms an extremely complex "network of relationality" and is "holistic system", and this included farms themselves. His ideology disregarded causal associations in farming systems, believing that attention should not be on the crops but on the system as a whole. For example, he did not focus on the idea of "harmful insects" requiring to be dealt with, in his system the crops in the farm had to become strong enough to resist insects.[34]

In Northern Thailand, his visit organized by a former student was influential in the rapid and widespread adoption of organic and chemical-free rice agriculture.[35]

In some applications, Fukuoka’s famous ‘do-nothing’ techniques have been criticized as “grow-nothing” techniques, leading to crop failures and requiring many years of adaption to make them work. Despite its simple appearance, his technique has been described as sophisticated [26] and in the initial years of transition from conventional, there is some loss in crop yield, estimated by Fukuoka himself to be about 10%.

Critics argue that he was too focused on the "inner world" and its connection with nature, and did not give attention to the realm of interpersonal relationships or society which are also an essential part of living, and his rejection of mechanization was not justifiable for modern agricultural production.[36] Fukuoka had few followers or associates in his own native country of Japan.[6] 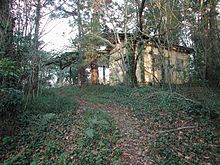 His farm in Shikoku changed hands to his son and daughter-in-law gradually during the late 1980s, as Fukuoka reached an advanced age [37] and his grandson now also farms. The family orchards of iyo-kan, amanatsu mikan and related varieties of citrus, and many more fruit and other trees remain.[28] Many of his iyo-kan and amanatsu mikan trees are still growing, although some old iyo-kan were replaced by new varieties of fruit due to old age. Woodlands remain along with orchards, including some areas of wild vegetables still growing amongst them. Some areas of straw-mulched cropping continue to produce grains and vegetables.

Some new experimentation is taking place but, for the most part, the family does not adhere strictly to Fukuoka's method. 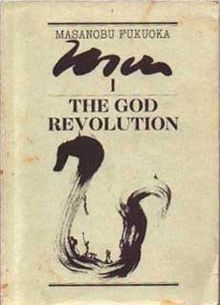 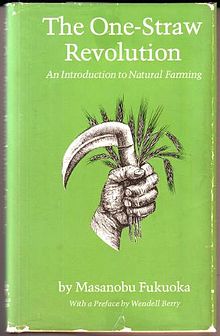