In Greek mythology, a harpy ("snatcher", from Latin: harpeia, originating in Greek: ἅρπυια, harpūia) was one of the winged spirits best known for constantly stealing all food from Phineas. The literal meaning of the word seems to be "that which snatches" as it comes from the ancient Greek word harpazein (ἁρπάζειν), which means "to snatch".

A harpy was the mother by the West Wind Zephyros of the horses of Achilles.[1] In this context Jane Ellen Harrison adduced the notion in Virgil's Georgics (iii.274) that mares became gravid by the wind alone..[2]

Hesiod[3] calls them two "lovely-haired" creatures, and pottery art depicting the harpies featured beautiful women with wings. Harpies as ugly winged bird-women, e.g. in Aeschylus' The Eumenides (line 50) are a late development, due to a confusion with the Sirens. Roman and Byzantine writers detailed their ugliness.[4] 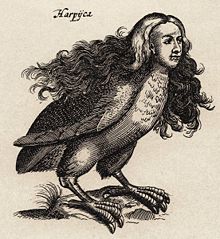 A medieval depiction of a harpy as a bird-woman.

The harpies were sisters of Iris, daughters of Thaumas and Electra.[5]

Phineas, a king of Thrace, had the gift of prophecy. Zeus, angry that Phineas revealed too much, punished him by blinding him and putting him on an island with a buffet of food which he could never eat. The harpies always arrived and stole the food out of his hands before he could satisfy his hunger, and befouled the remains of his food. This continued until the arrival of Jason and the Argonauts. The Boreads, sons of Boreas, the North Wind, who also could fly, succeeded in driving off the harpies, but without killing any of them, following a request from Iris, who promised that Phineas would not be bothered by the harpies again, and "the dogs of great Zeus" returned to their "cave in Minoan Crete". Thankful for their help, Phineas told the Argonauts how to pass the Symplegades.[6]

In this form they were agents of punishment who abducted people and tortured them on their way to Tartarus. They were vicious, cruel and violent. They lived on Strophades. They were usually seen as the personifications of the destructive nature of wind. The harpies in this tradition, now thought of as three sisters instead of the original two, were: Aello ("storm swift"), Celaeno ("the dark") — also known as Podarge ("fleet-foot") — and Ocypete ("the swift wing").

Aeneas encountered harpies on the Strophades as they repeatedly made off with the feast the Trojans were setting. Celaeno cursed them, saying the Trojans will be so hungry they will eat their tables before they reach the end of their journey. The Trojans fled in fear. 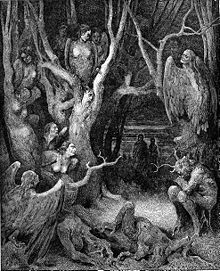 Harpies in the infernal wood, from Inferno XIII, by Gustave Doré, 1861

Harpies remained vivid in the Middle Ages. In his Inferno, XIII, Dante envisages the tortured wood infested with harpies, where the suicides have their punishment in the second ring:

Who drove the Trojans from the Strophades
With dire announcements of the coming woe.
They have broad wings, a human neck and face,

Clawed feet and swollen, feathered bellies; they caw
Their lamentations in the eerie trees.[7]

William Blake was inspired by Dante's description in his pencil, ink and watercolour "The Wood of the Self-Murderers: The Harpies and the Suicides" (Tate Gallery, London).

In the Middle Ages, the harpy, often called the "virgin eagle", became a popular charge in heraldry, particularly in East Frisia, seen on, among others, the coats-of-arms of Rietburg, Liechtenstein, and the Cirksena

The American Harpy Eagle is a real bird named after the mythological animal.

The term is often used metaphorically to refer to a nasty or annoying woman. In Shakespeare's Much Ado About Nothing, Benedick spots the sharp-tongued Beatrice approaching and exclaims to the Prince, Don Pedro, that he would rather do an assortment of arduous tasks for him "rather than hold three words conference with this harpy!"

With their composite form and violent nature, harpies are depicted in films, television and other aspects of popular culture. Harpies are commonly depicted as a race of bird-women, such as in Phillip Pullman's His Dark Materials book series. Occasionally the classic harpies are referenced by name, such as the appearance of Celaeno in Peter S. Beagle's novel The Last Unicorn. Harpies are also mentioned in the Percy Jackson series