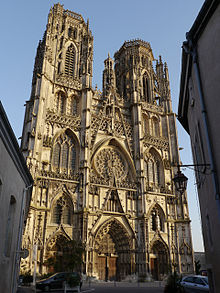 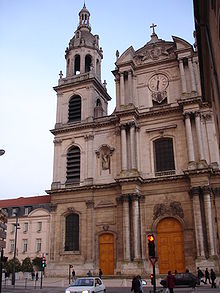 The title of count and the rights of sovereignty of the medieval Bishops of Toul originated in certain grants which Henry the Fowler gave St. Gauzelin in 927. During the Conflict of Investitures in 1108, the chapter became divided: the majority elected Riquin of Commercy as bishop; the minority chose Conrad of Schwarzenburg. Henry V granted Conrad the title of bishop, with the stipulation that he did not exercise episcopal office.

In 1271 grave differences broke out again in the chapter of Toul. In 1278 Pope Nicholas III personally appointed Conrad of Tübingen as bishop. Thereafter, it was generally the Holy See which appointed the bishops, alleging various reasons as vacancies arose. As a result, many Italian prelates held this important see until 1552, when Toul was occupied by France. In 1597 Charles III, duke of Lorraine asked Pope Clement VIII for the dismemberment of the See of Toul and the creation of a see at Nancy; this failed through the opposition of Arnaud d'Ossat, Henry's ambassador at Rome. In the end, Clement VIII decided that Nancy was to have a primatial church and that its prelate would have the title of Primate of Lorraine and wear episcopal insignia, but should not exercise episcopal jurisdiction.

In 1648 according to the Treaty of Westphalia the bishoprics of Metz, Toul and Verdun (all belonging to the Holy Roman Empire) became French cities. The duchy of Lothringen, surrounded by French territories and repeatedly occupied by French troops, finally fell to the French, and Lorraine became a French province. After the French revolution of 1789 France was divided into departments—Lorraine consisted of the departments of Meurthe, Meuse, Moselle and Vosges. Nancy, Verdun, Metz and Epinal became the capitals of these departments.[3]

In 1777 and 1778 Toul lost territories out of which were formed two new dioceses: Saint-Die and Nancy, both of them suffragans of Trier. The Concordat of 1802, suppressing Toul, made Nancy the seat of a vast diocese which included three Departments: Meurthe, Meuse, and Vosges. Eventually the latter two were detached from Nancy on the re-establishment of the Dioceses of Verdun and Saint-Dié in 1822. Since 1824 the bishops of Nancy have borne the title of Bishops of Nancy and Toul, as the ancient Diocese of Toul is almost entirely united with Nancy.[4]