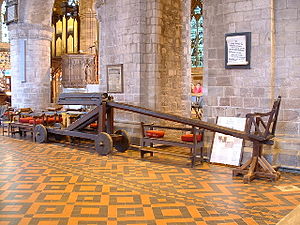 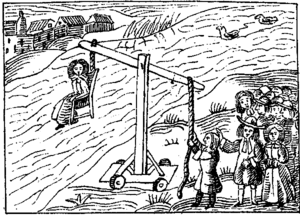 Punishing a common scold in the ducking stool. 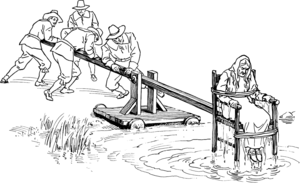 Ducking or cucking stool, a historical punishment for the common scold, 1896

Ducking-stools and cucking-stools are chairs formerly used for punishment of women in England and Scotland (see reference, 1985). The term cucking-stool derives from wyuen pine ("women's punishment") as referred in Langland's Piers Plowman(1378). They were both instruments of social humiliation and censure, primarily for the offense of scolding or back biting[1] and less often for sexual offenses like bearing an illegitimate child, or prostitution.

The stools were technical devices which formed part of the wider method of law enforcement through social humiliation. A common alternative was a court order to recite one’s crimes or sins after Mass or in the market place on market day, or informal action such as a Skimmington ride.

They were usually of local manufacture with no standard design. Most were simply chairs into which the victim could be tied and exposed at her door or the site of her offence. Some were on wheels like a tumbrel that could be dragged around the parish. Some were put on poles so that they could be plunged into water, hence "ducking" stool. The equivalents for men were the stocks, although these were not gender specific so that they were also used for women.

There does seem to have been a difference in usage between a ducking stool and a cucking stool. Although both were primarily forms of public exposure and humiliation, the cucking stool seems to have involved no water, with the victim raised up in the air on show.

A ballad, dating from about 1615, called "The Cucking of a Scold", illustrates the punishment inflicted to women whose behaviour made them be identified as "a Scold":

Then was the Scold herself,
In a wheelbarrow brought,
Stripped naked to the smock,
As in that case she ought:
Neats tongues about her neck
Were hung in open show;
And thus unto the cucking stool
This famous scold did go.[2]

The cucking-stool, or Stool of Repentance, has a long history, and was used by the Saxons, who called it the scealding or scolding stool. It is mentioned in Domesday Book as being in use at Chester, being called cathedra stercoris, a name which seems to confirm the first of the derivations suggested in the footnote below. Tied to this stool the woman—her head and feet bare—was publicly exposed at her door or paraded through the streets amidst the jeers of the crowd.

There is a reference from about 1378 to a cucking-stool as wyuen pine ("women's punishment") in Langland's Piers Plowman, B.V.29.

The cucking-stool could incidentally be used for both sexes—indeed, unruly married couples were occasionally bound back-to-back and ducked. However the device was most commonly used for the punishment of dishonest brewers and bakers.

Both seem to have become more common in the second half of the sixteenth century. It has been suggested this reflected developing strains in gender relations, but it may simply be a result of the differential survival of records. The cucking-stool appears to have still been in use as late as the mid-18th century, with Poor Robin's Almanack of 1746 observing:

Now, if one cucking-stool was for each scold,
Some towns, I fear, would not their numbers hold.

The ducking-stool was a strongly made wooden armchair (the surviving specimens are of oak) in which the victim was seated, an iron band being placed around her so that she should not fall out during her immersion. The earliest record of the use of such is towards the beginning of the 17th century, with the term being first attested in English in 1597. It was used both in Europe and in the English colonies of North America.

Usually the chair was fastened to a long wooden beam fixed as a seesaw on the edge of a pond or river. Sometimes, however, the ducking-stool was not a fixture but was mounted on a pair of wooden wheels so that it could be wheeled through the streets, and at the river-edge was hung by a chain from the end of a beam. In sentencing a woman the magistrates ordered the number of duckings she should have. Yet another type of ducking-stool was called a tumbrel. It was a chair on two wheels with two long shafts fixed to the axles. This was pushed into the pond and then the shafts released, thus tipping the chair up backwards. Sometimes the punishment proved fatal and the victim died of shock.

The last recorded cases are those of a Mrs. Ganble at Plymouth (1808); Jenny Pipes, a notorious scold (1809), and Sarah Leeke (1817), both of Leominster. In the last case the water in the pond was so low that the victim was merely wheeled round the town in the chair.

A tumbrel, or tumbril (F tombereau) was a tipcart—usually used for carrying dung, sand, stones, and so forth—which transported condemned prisoners to the guillotine during the French Revolution.

Use in identifying witches

In medieval times, ducking was seen as a foolproof way to establish whether a suspect was a witch.[3][4] The ducking stools were first used for this purpose but ducking was later inflicted without the chair. In this instance the victim's right thumb was bound to left toe. A rope was attached to her waist and the "witch" was thrown into a river or deep pond. If the "witch" floated it was deemed that she was in league with the devil, rejecting the "baptismal water". If the "witch" drowned she was deemed innocent.[5] This particular method of ducking was also inflicted on the rare occasions when men were accused of witchcraft.

Ducking stools have appeared occasionally in film and television, such as in Babes in Toyland, The Avengers ("Murdersville", Season 6, Episode 7; 1967), and Doctor Who ("The Highlanders", Season 4, Episode 15; 1966).

A complete ducking stool is on public display in Leominster Priory, Herefordshire. The town clock, commissioned for the Millennium, features a moving ducking stool depiction.