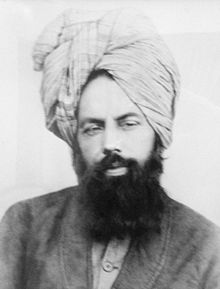 The death of Mirza Ghulam Ahmad, an Indian who claimed to be a prophet, a messiah and a spiritual reincarnation of Jesus in 1908, due to dysentery sparked further controversy surrounding the validity of his claims and prophecies. His opponents allege that he died an "accursed death" and that some of his predictions and prophecies turned out to be untrue due to the manner and timing of his death and hence invalidate his rank and station and prove him false in his claim. His followers claim that both the manner and timing of his death were in accordance with all of his relevant predictions, and hence reaffirm his truthfulness and claims.

Circumstances of his death

At the time of Mirza Ghulam Ahmad's death, the recorded cause of death was complications arising from severe diarrhea.[1][2]

When the news of his death spread in Lahore, a crowd of opponents gathered outside the house. It is reported that much jubilation was displayed and a mock funeral was arranged for the entertainment of the crowd.[3] Some Muslim opponents of Ahmadiyya claim that his death, which they allege as being a result of cholera, was accursed and his terminal disease a sign of wrath of God,[4][5] which he mentioned in his own writings would be the punishment for a liar: "...punishment which is not by human hands but only at the hands of God, such as Plague and Cholera etc. deadly diseases...".[6]

Ahmadis do not subscribe to the view that the death was due to cholera.[1][2] They contend that the attending physicians at the time of his death declared the cause of death as diarrhoea[2][7] and not cholera, and the same was recorded for publication in newspapers. They also claim that the lack of precautions taken by attending doctors and his followers against infectious diseases during the postmortem handling of Ahmad's body was not consistent with a death from cholera.[1]

His critics say that his death proved some of his prophecies false:[8]

Ahmadiyya Muslims see this episode as reminiscent of the prophecy of the Biblical Prophet Jonah to the city of Nineveh. They answer the critics by claiming that the original prophecy which was published in the book Jang e Muqaddas was conditional upon Atham not inclining towards 'truth' as was stated provided he does not incline towards truth.[14] They argue that Atham was in constant fear and backed out of his Anti-Islamic stance for the 15 months of the prophecy. Ahmadiyya Muslims say that after much jubilation was shown by the opponents of Ahmad upon Atham being alive once the time limit of the original prophecy expired, Ghulam Ahmad invited him to swear on oath that he did not entertain the least thought of the truth of Islam and the falsehood of Christianity. His refusal to do so is sufficient proof of his inclining towards truth.[15] They point out that Abdullah Atham eventually died on July 27, 1896 within the lifetime of Ghluam Ahmad after he had made the prophecy of his death on September 30, 1895,[16]