Cichociemni (Polish pronunciation: [t͡ɕixɔˈt͡ɕɛmɲi]; "the Silent-Dark Ones" or "The Unseen and Silent"[1]) were elite special-operations paratroops of the Polish Home Army (Polish: Cichociemnych Spadochroniarzy A K)[1] of the Polish Army in exile, created in Great Britain during World War II to operate in occupied Poland.

The origins of the name are obscure and will never be known but was probably related to how some soldiers would seemingly disappear from their line units overnight to volunteer for special operations service and it also describes those "who appear silently where they are least expected, play havoc with the enemy and disappear whence they came, unnoticed, unseen."[1]

The Cichociemni were trained initially in Scotland in preparation for missions for the Polish underground in occupied Poland such as building clearance and bridge demolition. In 1944 training was also carried out in Brindisi, Italy, which had by then fallen to the Allies.

Initially the name was informal and was used mainly by the soldiers who volunteered to parachute into Poland. However, from September 1941 it became official and was used in all documents. It was applied both to the secret Polish Headquarters training unit created to provide agents with necessary knowledge, money and equipment, as well as to agents who were transported to Poland and to other German-occupied countries.

On 30 December 1939, Captain Jan Górski, a Polish Army officer who had escaped to France after the invasion of Poland, drew up a report for the Polish Chief of Staff. Górski proposed creating a secret unit to maintain contact with the underground ZWZ, using a group of well-trained envoys. The report was ignored, so Górski resubmitted it several times. Finally the commander of the Polish Air Force, General Zając, replied that, while creation of such a unit would be a good move, the Polish Air Force had no means of transport and no training facilities for such a unit.

Górski and his colleague Maciej Kalenkiewicz continued studying the possibility of paratroops and special forces. After the capitulation of France, they managed to reach the United Kingdom. They studied documents on German paratroops and drafted a plan to create in exile a Polish airborne force to be used in covert support operations. The force was to be employed solely in aid of a future uprising in occupied Poland. Their plan was never adopted, but on 20 September 1940 the Polish commander-in-chief, General Władysław Sikorski, ordered the creation of Section III of the Commander-in-Chief's Staff (Oddział III Sztabu Naczelnego Wodza). Section III's purpose was contingency planning for covert operations in Poland, air delivery of arms and supplies, and training of paratroops.

The 3rd Detachment started to accept volunteers soon afterwards. Those who were chosen left their units silently and at night - hence the name, Cichociemni. Among 2,413 candidates, only 605 managed to finish the training and passed all the exams. 579 of them qualified for the airlift.

Among the volunteers were:

During the first phase of the training all the volunteers were taught to use all weapons (including British, Polish, German, Russian and Italian) and mines. Additional courses were organized on which the soldiers were trained in basic covert operations, topography, cryptography, and sharpshooting. They were also taught all the details of life in occupied Poland, from laws imposed by the Germans to fashion popular in Warsaw under the occupation. The fourth course included all sorts of covert operations, Jujutsu, and shooting at invisible targets,

The final course included learning of a new, false identity. All soldiers who passed training were sworn in as members of the Armia Krajowa. 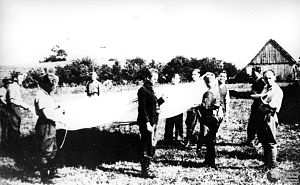 The first air bridge was organized on February 16, 1941. The Allied air commands carried out 483 air bridges altogether, losing 68 planes to air crashes and enemy fire. Apart from the Cichociemni themselves, approximately 630 tonnes of war material were delivered in special containers. In addition, the agents delivered the following amounts of money to the Armia Krajowa:

Through 27 December 1944, 316 soldiers[2] and 28 envoys successfully parachuted into Poland. Additionally, 17 agents were dropped into Albania, France, Greece, Italy and Yugoslavia. An unknown number of Poles (including the best known, Krystyna Skarbek) were also parachuted into France by the British Special Operations Executive to start an underground movement among the half-million-strong Polish minority.

Though the unit was organized in collaboration with SOE, it was largely independent. The Polish section of the SOE was the only one which chose its own men freely and operated its own radio communication with an occupied country. Also, the identities of the Polish agents were known only to the Polish General Staff.

Among those transported to Poland were soldiers of all grades. The oldest of them was 54 years old, the youngest was 20. As a rule, all volunteers were promoted one rank upwards at the moment of their jump. 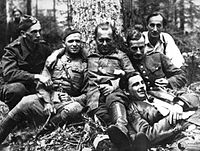 In Poland the Cichociemni were transferred mostly to various special units of the ZWZ and AK. Most of them joined Wachlarz, Związek Odwetu and KeDyw. Many became important staff officers of the Polish Secret Army and took part in the Operation Tempest and the Uprisings in Wilno, Lwów and Warsaw.

The cichociemni took over various duties in occupied countries:

The most notable Cichociemni included:

Out of 91 cichociemni who took part in the Warsaw Uprising 18 were killed in action.

The first book on the Cichociemni was published England in 1954; a Polish edition "Drogi cichociemnych : opowiadania zebrane i opracowane przez kolo spadochroniarzy Armii Krajowej" by Veritas and a English edition "The unseen and Silent; adventures from the underground movement narrated by paratroops of the Polish Home Army" published by Sheed and Ward. The Polish edition was republished in England several times over the years the last being in 1973. A miniature version of "Drogi cichociemnych" published in two volumes by "Kurs" and distributed in communist Poland in 1985.

General c.c. Stefan Bałuk's memoir, Byłem Cichociemnym (I was a Cichociemny) was published in 2008. He was 94 years old when the book first appeared in bookstores. The book was translated into English in 2009 (Silent and Unseen: I was a WWII special ops commando). On August 4, 1995, the Polish special forces unit GROM adopted the name and traditions of the Cichociemni.