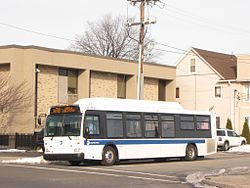 Routes shown are for the full route except for branching. The N4 and N6 provide service 24 hours a day; all other routes are daily service except late nights unless otherwise noted.

The City of Long Beach operates five bus routes within the City and to Point Lookout, all originating from the Long Beach Railroad Station. The fare is $1.50 unless noted, and MetroCard is not accepted.

Service is available at all times except early Monday morning.