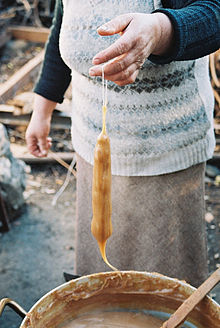 The main ingredients are grape must, nuts and flour. Almonds, walnuts, hazel nuts and sometimes raisins are threaded onto a string, dipped in thickened grape juice or fruit juices and dried in the shape of a sausage.[4][5][6][1]

Soutzoukos, probably from Turkish sujuk meaning 'sausage' because of its shape,[7] making has two parts: making must jelly, called palouzes or moustalevria; and dipping strings of almonds into it.

Must is placed in a large bronze cauldron (called chartzin or kazani) and heated slowly. A small amount of a special white earth called asproi is added to the boiling must and causes impurities to rise to the surface where they are collected and removed. It is possible to substitute asproi, when not available, with lager beer, which has a similar result. Once the cleansing process is complete the must is left to cool. Next, flour is added while stirring and heating the mixture. When it gets to the right consistency, judging from the rate of steam bubbles and the fluency of the mixture, it is removed from the heat. The mix, called palouzes, is now ready for dipping the almond strings and make soutzoukos.

The next step is the making of soutzoukos involves the creation of strings of almonds (or walnuts), which are dipped in the palouzes mixture and are then left to dry. First, the nuts are shelled and dipped into water in order to become softer. Once soft enough, they are strung onto 2-3 meter-long threads. The strings are dipped in the palouzes mixture until completely covered. This process is repeated several times (usually three times) until soutzoukos has the desired thickness. Soutzoukos strings are then left to dry for 5-6 days. It then ready for consumption or storage, even though some people like to eat soutzoukos fresh.

Soutzoukos can be eaten as it is or accompanied with wine and zivania.