The Order of Ouissam Alaouite or the Royal Order of Al-Alaoui is a military decoration of Morocco which is bestowed by the King of Morocco upon those civilians and military officers who have displayed heroism in combat or have contributed meritorious service to the Moroccan state. The decoration was established on January 11, 1913 and is awarded in five classes: Grand Cross (Grand Croix), Grand Officer (Grand Officier), Commander (Commandeur), Officer (Officier) and Knight (Chevalier).[1]

The Order of Ouissam Alaouite is similar to the Legion of Merit, awarded by the United States military. 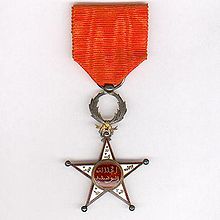 The order of Ouissam Alaouite was created during the colonial period. The French authorities in Morocco considered it necessary to have the power to bestow an official honour or decoration in response to loyal service; and they wanted to avoid over-burdening the bureaucracy of the Légion d'Honneur Order in Paris.[1] The ribbon of the order during this period was a shade of orange[2] or pumpkin-coloured.[3] 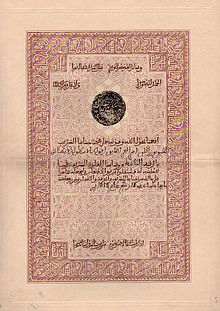 Moroccan decree (dahir) which proclaims and confirms that the Order of Oissam Alaouite is conferred on Ernesto Burzagli in 1922.

In the opening scene of the film Patton, George C. Scott, portraying then-Major General Patton, is shown receiving the Grand Cross of the Order of Ouissam Alaouite. This was no mere Hollywood contrivance. Under Patton's command, Allied forces took Casablanca after only four days of fighting. So impressed was the Sultan of Morocco that he presented Patton with the special Order of Ouissam Alaouite, with the citation: "Les Lions dans leurs tanières tremblent en le voyant approcher" (The lions in their dens tremble at his approach).[5] Patton wryly described the ceremony as a "non-military activity,"[6] but in his memoirs, he does not fail to note the Operation Torch staff officers who were similarly honored on that occasion.[3]