The German term Schießbefehl ("order to fire") was the common term to refer to Befehl 101 (Order 101), a standing order that instructed border patrols of the former German Democratic Republic (GDR or East Germany) to prevent border penetration by all means including killing the violators.

The GDR border troops (Grenztruppen der DDR), who were not formally integrated in the regular armed forces (the Nationale Volksarmee), were instructed to follow a certain procedure when encountering persons moving illegally within the border strip:

The border troops were told to avoid shooting in the direction of the territory of West Berlin and West Germany. Recently uncovered evidence shows that children were not immune from the order.[1] 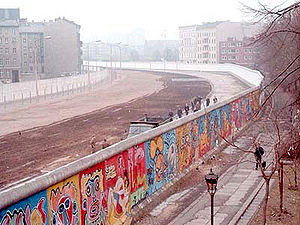 After an unsuccessful escape attempt, the shooter would be rewarded and granted a special leave. Any occurrences at the border were to be kept secret. Often the soldier would be transferred to another military unit and ordered to keep silent. However, when a fugitive successfully crossed the border, disciplinary measures taken against border guards often included prison terms in the infamous military prison at Schwedt. Many soldiers tried to avoid being accused of letting a fugitive escape by deliberately shooting off-target.

Each attempted or successful escape was followed by a formal investigation by the military prosecution authority and the Ministerium für Staatssicherheit (MfS, or "Ministry for State Security", better known as the Stasi). When would-be escapees were killed, strict regulations were imposed on the family regarding the funeral; for instance, no obituaries were to be printed in the local newspapers.

East German law only allowed crossing the border at so called Grenzübergangsstellen ("checkpoints"), such as the famous Checkpoint Charlie. Elsewhere, warning signs were posted telling people not to enter the border strip. Any violation was considered a criminal act. However, these are only the formal aspects of the law. After construction of the Berlin Wall in 1961, authorized travel by East Germans into West Germany and West Berlin was very limited; many young people were motivated to attempt a desperate flight over the inner German border. Overall, a total of about 260 people were killed attempting to cross at the Berlin Wall, at the main East-West border, or via the Baltic Sea (though the exact number of fatalities is difficult to estimate; see Inner German border deaths). In Berlin alone 190 people were killed in the course of 28 years. An unknown number were heavily wounded and later arrested. The last victim of the Berlin Wall was Chris Gueffroy.

The victims of this system also include border police soldiers who were shot by fugitives.

To avoid negative press, the Schießbefehl was suspended for public holidays or state visits. Border occurrences were recorded by the Bundesgrenzschutz (BGS or Federal Border Guard, the West German border guards), the West Berlin police and by the military police of the Allied Forces. Files were collected in the central registration office at Salzgitter.

After German reunification, the Todesschützen (soldiers who allegedly killed fugitives) were brought to trial in the federal courts in what were known as the Mauerschützen-Prozesse (wallshooters' trial). Also, high-ranking officers of the border police and of the Nationale Verteidigungsrat (National Defense Council of the GDR) were charged in court. The verdicts generally agree that even the common soldier should have and must have recognised that the GDR border laws were so fundamentally in conflict with the International Covenant on Civil and Political Rights, which the GDR had signed and ratified, that they were not law at all but formalized injustice, and thus the soldiers ought to have disobeyed their commanding officers.

This article incorporates information from the revision as of 31 August 2004 of the equivalent article on the German Wikipedia.