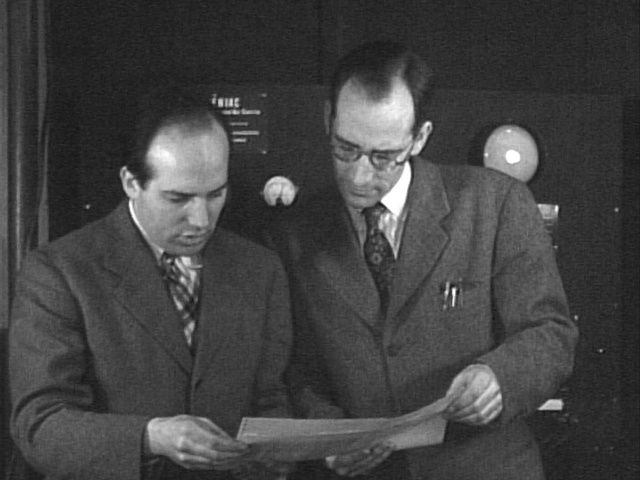 
John William Mauchly ( &ndash; ) was an American who, along with , designed , the first general purpose electronic , as well as , and , the first commercial computer made in the .

Together they started the first computer company, the (EMCC), and pioneered fundamental computer concepts including the , , and programming languages. Their work, as exposed in the widely read "" (1945) and as taught in the (1946) influenced an explosion of computer development in the late 1940s all over the world.

Mauchly was born in . He grew up in while his father Sebastian Mauchly was a physicist at the Carnegie Institute of Washington, D.C. He earned the Engineering Scholarship of the State of Maryland, which enabled him to enroll at in the fall of 1925 as an undergraduate in the Electrical Engineering program. In 1927 he enrolled directly in a Ph.D. program there and transferred to the graduate physics program of the university. He completed his Ph.D. in 1932 and became a professor of physics at near , where he taught from 1933 to 1941.

In 1941 Dr. Mauchly took a course in wartime electronics at the , part of the . There he met , a recent Moore School graduate. Mauchly accepted a teaching position at the Moore School, which was a center for wartime computing. Eckert encouraged Mauchly to believe that vacuum tubes could be made reliable with proper engineering practices. The critical problem that was consuming the Moore School was ballistics: the calculation of firing tables for the large number of new guns that the U.S. Army was developing for the war effort.

In 1942 Mauchly wrote a memo proposing the building of a general-purpose electronic computer. The proposal, which circulated within the Moore School (but the significance of which was not immediately recognized), emphasized the enormous speed advantage that could be gained by using digital electronics with no moving parts. Lieutenant , who was the liaison between the and Moore School, picked up on the idea and asked Mauchly to write a formal proposal. In April 1943, the Army contracted with the Moore School to build the Electronic Numerical Integrator and Computer (). Mauchly led the conceptual design while Eckert led the hardware engineering on ENIAC. A number of other talented engineers contributed to the top secret project "PX".

Because of its high-speed calculations, ENIAC could solve problems that were previously unsolvable. It was roughly a thousand times faster than the existing technology. It could add 5,000 numbers or do fourteen 10-digit multiplications in one second.

ENIAC could be programmed to perform sequences and loops of addition, subtraction, multiplication, division, square-root, functions, and conditional branches. Programming was initially accomplished with patch cords and switches, and reprogramming took days. It was redesigned in 1948 to allow the use of s with some loss in speed.

The ENIAC design was frozen in 1944 to allow construction. Eckert and Mauchly were already aware of the limitations of the machine and began plans on a second computer, to be called EDVAC. By January 1945 they had procured a contract to build this stored-program computer. Eckert had proposed a mercury to store both program and data. Later that year, mathematician learned of the project and joined in some of the engineering discussions. He produced what was understood to be an internal document describing the EDVAC.

The term arose from von Neumann's paper, "" [http://qss.stanford.edu/~godfrey/vonNeumann/vnedvac.pdf] . Dated , , it was an early written account of a general purpose stored-program computing machine (the ). Goldstine, in a move that was to become controversial, removed any reference to Eckert or Mauchly and distributed the document to a number of von Neumann's associates across the country. The ideas became widely known within the very small world of computer designers.

Besides the lack of credit, Eckert and Mauchly suffered additional setbacks due to Goldstine's actions. The ENIAC patent US patent|3120606, issued in 1964 [http://www.fh-jena.de/~kleine/history/machines/EckertMauchly-ENIAC-us-patent-3120606.pdf] was filed on , and granted , but the public disclosure of design details of EDVAC in the "First Draft" (which were also common to ENIAC) was later cited as one cause for the 1973 invalidation of the ENIAC patent.

In March 1946, just after the ENIAC was announced, the Moore School decided to change their patent policy, in order to gain commercial rights to any future and past computer development there. Eckert and Mauchly decided this was unacceptable; they resigned. However they had already been contracted to do one more thing at the Moore School: to give a series of talks on computer design.

The course "The Theory and Techniques for Design of Digital Computers", ran from to . Eckert gave 11 of the lectures; Mauchly and Goldstine each delivered 6. "The Moore School Lectures", as they came to be known, were attended by representatives from the army, the navy, MIT, the National Bureau of Standards, Cambridge University, Columbia, Harvard, the Institute for Advanced Study, IBM, Bell Labs, Eastman Kodak, General Electric, and National Cash Register. A number of the attendees were to later go on to develop computers, such as Maurice Wilkes, of Cambridge, who built EDSAC.

In 1947 Eckert and Mauchly formed the first computer company, the (EMCC); Mauchly was president. They secured a contract with the to build an "EDVAC II", later named . UNIVAC, the first computer designed for business applications, had many significant technical advantages such as magnetic tape for mass storage. As an interim product The company created and delivered a smaller computer, , but were still in shaky financial situation. They were purchased by and became the UNIVAC division.

Mauchly’s interest lay in the application of computers, as well as to their architecture and organization. His experience with programming the ENIAC and its successors led him to create (see [http://doi.ieeecomputersociety.org/10.1109/MAHC.1988.10004 "The UNIVAC SHORT CODE"] ), the first programming language actually used on a computer (predated by Zuse’s conceptual ). It was a pseudocode interpreter for mathematical problems proposed in 1949 and ran on the UNIVAC I and II. Mauchly's belief in the importance of languages led him to hire to develop a compiler for the UNIVAC.

John Mauchly has also been credited for being the first one using the verb "to program" in his 1942 paper on electronic computing, although in the context of ENIAC, not in its current meaning.

Dr. Mauchly stayed involved in computers for the rest of his life. He was a founding member and President of the Association for Computing Machinery (ACM) and also helped found the Society of Industrial and Applied Mathematics (SIAM). The Eckert-Mauchly Cormporation was bought by Remington Rand in 1950 and for ten years Dr. Mauchly remained as Director of Univac Applications Research. Leaving in 1959 he formed Mauchly Associates, a consulting company that later introduced the Critical Path Method (CPM) for construction scheduling by computer. In 1967 he founded Dynatrend, a computer consulting organization. In 1973 he became a consultant to Sperry Univac.

Mauchly and Eckert's patent claim on the 1946 ENIAC was invalidated by U.S. Federal Court decision in October, 1973 for several reasons. Some had to do with the time between publication (the "First Draft") and the patent filing date (1947.) Judge Larson ruled that "the subject matter was derived" from the earlier (ABC). This statement has become the center of a controversy.

Critics note that while the court said that the ABC was the first electronic digital computer, it did not define the term . It had originally referred to a person who computes, but was adapted to apply to a machine. Some of these critics say that the ABC does not meet their modern definition, which requires programmability. Fact|date=February 2007

Critics of the court decision also note that there is, at a component level, nothing in common between the two machines. The ABC was binary; the ENIAC was decimal. The ABC used regenerative drum memory; The ENIAC used electronic decade counters. The ABC used its tubes to implement a binary serial adder while the ENIAC used tubes to implement a complete set of decimal operations. The ENIAC's general-purpose instruction set, together with the ability to automatically sequence through them, made it a general-purpose computer.

Another point frequently raised is that the ABC was never completely functional. The input-output mechanism was not reliable enough to finish a problem (30 equations with 29 unknowns) without error. Also, the machine used a 60 Hz clock, limiting it to 30 operations per second. But these issues have no relevance to the patentability of the ABC or of the ENIAC.

Proponents for the court decision emphasize that the testimony established that Mauchly definitely had complete access to Atanasoff's machine and the documents describing it. Letters he wrote to Atanasoff show that he was at one time at least considering building on Atanasoff's approach.

Others claim that the decision was made irrespective of who had invented the computer, it was actually made to break up a monopoly created by a secretive deal between IBM and Sperry, when the traded licenses to IBM's punch card and Sperry's ENIAC patent.

Mauchly consistently maintained that it was the use of high-speed electronic flip-flops in cosmic-ray counting devices at that gave him the idea for computing at electronic speeds.