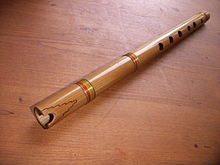 The quena is a South American wind instrument, mostly used by Andean musicians
Not to be confused with Quena, Egypt.

The quena (Quechua: qina, sometimes also written "kena" in English) is the traditional flute of the Andes. Usually made of bamboo or wood, it has 6 finger holes and one thumb hole and is open on both ends. To produce sound, the player closes the top end of the pipe with the flesh between his chin and lower lip, and blows a stream of air downward, along the axis of the pipe, over an elliptical notch cut into the end. It is normally in the key of G, with G being the lowest note (all holes covered). It produces a very breathy or airy tone.

The quenacho (also "kenacho" in English) is a greater, lower-toned version of the quena and made the same way. It is in the key of D, a fourth lower than the quena. In most of Andes' towns "vamos a ir a la quena" (we will go to the quena) was a popular sentence to threaten little children, because the quena was made of bamboo, a hard material.

Quena is mostly used in traditional Andean music. In the 1960s and 1970s the quena was used by several Nueva Canción musicians, this use was in most cases for particular songs and not as a standard instrument but some groups such as Illapu have used it regularly. In the 1980s and 1990s some post-Nueva Canción rock groups have also incorporated the quena in some of their songs; notably Soda Stereo in Cuando Pase el Temblor and Los Enanitos Verdes in Lamento Boliviano. The quena is also relatively common in World music.

Other Andean flutes include