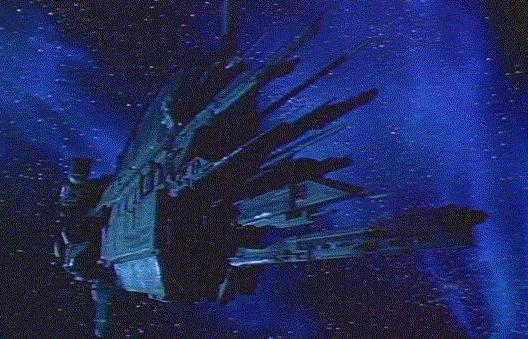 The U.S.S. "Sulaco" is a fictional spaceship and important setting in the film "Aliens". It also appears briefly in the opening scene of "", and will appear in the upcoming "" video game that takes place shortly after the events of "Alien 3".

The "Sulaco" is named after a fictional town in 's novel "",

Some social sciences research into the Alien franchise's symbology has considered it significant that Sulaco in Conrad's "Nostromo" is the home of the white owners of the silver mine figuring in the book, while the "Sulaco" in "Aliens" transports soldiers to investigate unknown troubles at a corporate outpost of and to protect the investment - drawing parallels between the 'corporate' owners in Conrad and the shadowy business entity forming a central part of the Aliens franchise. [" [http://books.google.co.uk/books?id=VNQlTGRm-bEC&pg=PA76&dq=sulaco+aliens&lr=&as_brr=0&hl=de&sig=FyClKkaG2Aq9SEniquW_NWccodI#PPA76,M1 Gospel Images in Fiction and Film: On Reversing the Hermeneutical (excerpt via Google Books)] - Kreitzer, Larry J.; , 2002, Page 76]

The "Sulaco" is a "Conestoga"-class starship that transports to investigate the loss of communication with a colony on in the "Aliens" movie. While carrying only a small complement in the movie, and only two dropships, it is noted in other reference material that as a troop carrier, the Sulaco could carry up to 20,000 tons of cargo, with up to eight s and has sufficient life support capabilities for 90 crew and passengers (with up to 2,000 possible in hibernation for short term trips).

After encountering aliens in the colony, only (), one colonist, a Marine, and the android Bishop () manage to return to the ship. They also accidentally carry along an alien queen, which Ripley ejects into space during the movie's final battle before the survivors enter cryogenic sleep. In "Alien 3", a fire aboard the "Sulaco" leads to the survivors' cryogenic sleep tubes being launched from the ship. The "Sulaco" will be a setting for the upcoming video game .

, a principal conceptual designer on "Aliens", first designed the Sulaco as a massive sphere, a "heavily armed cargo ship, outfitted to transport material". was not satisfied, as having a spherical model move past the lens would have required variable focus; he produced a quick sketch of the style of ship he imagined and noted that he was imagining something like a "a forest of antennae enter [ing] the frame, followed by the enormous bulk of the SULACO".

While some claim that the basic shape was based on a submarine, [ [http://www.starshipmodeler.com/tech/othr_ref.htm Alien] (from the 'starshipmodeler.com' website. Accessed 2008-05-20.)] the design has most often been described as a 'gun in space' due to the elongated form resembling the pulse rifles used in the movie - with Syd Mead agreeing that (in addition to Cameron's preferences) this was one of the reasons for the switch from the spherical form. [ [http://gadgets.boingboing.net/2008/05/16/syd-meads-sulaco-shi.html Syd Mead's "Sulaco" ship from Aliens just a big gun] (from website. Accessed 2008-05-18.)] Other film analysts have remarked on how the opening shot of the ship as something sinister and weaponlike presages Ripley's transformation during the movie into a warrior figure, akin to the hardened Marines the "Sulaco" already carries. [" [http://books.google.co.uk/books?id=k_H3vLIRECgC&printsec=frontcover&dq=sulaco+aliens&lr=&as_brr=0&hl=de#PPA84,M1 Alien Woman: The Making of Lt. Ellen Ripley (excerpt via Google Books)] - Ximena Gallardo C. & Smith, C. Jason; , 2004, Page 84-85] The opening shot of the ship travelling through space has also been called 'fetishistic' and 'shark-like', "an image of brutal strength and ingenious efficiency" - while the rigid, mechanic, militarized interior of the "Sulaco" (designed by ) is contrasted to the somewhat more organic and friendly interior of the "Nostromo" in the first movie (also designed by Ron Cobb). [" [http://books.google.co.uk/books?id=2fg69plSKYwC&pg=PA180&dq=sulaco+aliens&lr=&as_brr=0&hl=de&sig=EmWEyn0f-0o2l4SLe042GnfIBKo#PPA159,M1 Alien to The Matrix: Reading Science Fiction Film (excerpt via Google Books)] - Kaveney, Roz; , 2005, Page 159] Other sources have also noted the the initial scenes pay to the opening tour through the "Nostromo" in "Alien". ["Beautiful Monsters: The Unofficial and Unauthorized Guide to the Alien and Predator Movies" - McIntree, David; , 2005]

Mead has denied rumors in the fan community that actual scientific research had been done into how a futuristic spaceship might work. As an example, he noted that the idea for the early spherical design had nothing to do with creating centrifugal gravity, as such problems were for storyline purposes assumed to have already been solved by science.

Several movie academics have remarked on the color and lighting symbology in the Alien franchise, which often offsets white, strongly lighted environments (spaceships, corporate offices) against darker, dirtier, 'corrupted' settings (derelict alien ships, abandoned industrial facilities). These black touches contrast, or even attempt to take over, the purity of the white elements. ["Alien and the Monstrous-Feminine" - Creed, Barbara; from "Alien Zone: Cultural Theory and Contemporary Science Fiction Cinema", Editor Kuhn, Annette; Verso, 1990, Page 129] Others have agreed with this interpretation, and pointed to the "Sulaco" with its "sterilized, white interior" as representing this element in the second film of the franchise. [" [http://www.usask.ca/relst/jrpc/art17-alienresurrection.html Ripley and Alien] " - Ortigo, Kile M. in "I’m a Stranger Here Myself": Forced Individuation in Alien Resurrection", Department of Psychology, , Georgia, United States. Accessed 2008-05-20.)]

Academics analyzing the role of the Ripley character in the Aliens franchise have also remarked on the symbolism of the opening scene of "", set in the "Sulaco" cryo chamber. Ripley is compared with an incorrupt Catholic saint preserved in a glass coffin (akin to Saint Bernadette of Lourdes, both in her lying in state in the cryotube as well as for her her 'incorrupt body' which has twice survived being almost infested with the Alien). Accompanied by the of the Ordinary Mass playing in the background of the opening, it is argued that the Sulaco has been transformed "into a holy site where the iconic bodies of a fetishistic religion lie in state" - setting the scene for a lone facehugger attacking its victim (corrupting it) and also causing the emergency system to evacuate the cryotubes into space, to plunge down to Fiorina "Fury" 161 (representing the Fall from Grace). [" [http://books.google.co.uk/books?id=4ecFu4B_CpoC&printsec=frontcover&hl=de&source=gbs_summary_r&cad=0#PPA122,M1 Alien Woman: The Making of Lt. Ellen Ripley (excerpt via Google Books)] - Ximena Gallardo C. & Smith, C. Jason; , 2004, Page 122-123]

;Video gamesThe upcoming videogame "Aliens: Colonial Marines" will begin by featuring the now-abandoned "Sulaco" being investigated by a Colonial Marine search-and-rescue team set shortly after the events of "Alien 3".

*"Nostromo" (spaceship), a spaceship in the first "Alien" film