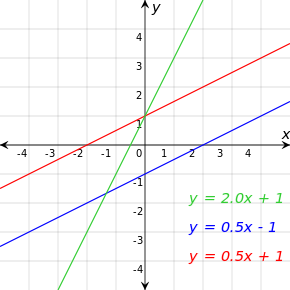 Three lines — the red and blue lines have the same slope, while the red and green ones have same y-intercept.

A representation of one line segment

The notion of line or straight line was introduced by the ancient mathematicians to represent straight objects with negligible width and depth. Lines are an idealization of such objects. Thus, until seventeenth century, lines were defined like this: "The line is the first species of quantity, which has only one dimension, namely length, without any width nor depth, and is nothing else than the flow or run of the point which [...] will leave from its imaginary moving some vestige in length, exempt of any width. [...] The straight line is that which is equally extended between its points" [1]

Euclid described a line as "breadthless length", and introduced several postulates as basic unprovable properties from which he constructed the geometry, which is now called Euclidean geometry to avoid confusion with other geometries which have been introduced since the end of nineteenth century (such as non-Euclidean geometry, projective geometry, and affine geometry).

In modern mathematics, given the multitude of geometries, the concept of a line is closely tied to the way the geometry is described. For instance, in analytic geometry, a line in the plane is often defined as the set of points whose coordinates satisfy a given linear equation, but in a more abstract setting, such as incidence geometry, a line may be an independent object, distinct from the set of points which lie on it.

When a geometry is described by a set of axioms, the notion of a line is usually left undefined (a so-called primitive object). The properties of lines are then determined by the axioms which refer to them. One advantage to this approach is the flexibility it gives to users of the geometry. Thus in differential geometry a line may be interpreted as a geodesic (shortest path between points), while in some projective geometries a line is a 2-dimensional vector space (all linear combinations of two independent vectors). This flexibility also extends beyond mathematics and, for example, permits physicists to think of the path of a light ray as being a line.

When geometry was first formalised by Euclid in the Elements, he defined lines to be "breadthless length" with a straight line being a line "which lies evenly with the points on itself".[2] These definitions serve little purpose since they use terms which are not, themselves, defined. In fact, Euclid did not use these definitions in work and probably included them just to make it clear to the reader what was being discussed. In modern geometry, a line is simply taken as an undefined object with properties given by postulates,[3] but is sometimes defined as a set of points obeying a linear relationship.[1]

In an axiomatic formulation of Euclidean geometry, such as that of Hilbert (Euclid's original axioms contained various flaws which have been corrected by modern mathematicians),[4] a line is stated to have certain properties which relate it to other lines and points. For example, for any two distinct points, there is a unique line containing them, and any two distinct lines intersect in at most one point.[5] In two dimensions, i.e., the Euclidean plane, two lines which do not intersect are called parallel. In higher dimensions, two lines that do not intersect may be parallel if they are contained in a plane, or skew if they are not.

Any collection of finitely many lines partitions the plane into convex polygons (possibly unbounded); this partition is known as an arrangement of lines.

If the concept of "order" of points of a line is defined, a ray, or half-line, may be defined as well. A ray is part of a line which is finite in one direction, but infinite in the other. It can be defined by two points, the initial point, A, and one other, B. The ray is all the points in the line segment between A and B together with all points, C, on the line through A and B such that the points appear on the line in the order A, B, C.[6]

In topology, a ray in a space X is a continuous embedding R+ → X. It is used to define the important concept of end of the space.

In coordinate geometry, lines in a Cartesian plane can be described algebraically by linear equations and linear functions. In two dimensions, the characteristic equation is often given by the slope-intercept form:

m is the slope or gradient of the line.
c is the y-intercept of the line.
x is the independent variable of the function y = f(x).

In three dimensions, a line is described by parametric equations:

In R2, every line L is described by a linear equation of the form

with fixed real coefficients a, b and c such that a and b are not both zero (see Linear equation for other forms). Important properties of these lines are their slope, x-intercept and y-intercept.

If x0 ≠ x1, this equation may be rewritten as

Three points are said to be collinear if they lie on the same line. In the geometry of space, this is the degenerate condition where three points do not determine a plane. The concept of collinearity is thus usually derived from a presumption of lines being in the geometry. However, in synthetic geometry it has been known since 1900 that collinearity can be made a defined concept, and the notion of a line can be based upon it as a set of collinear points:

The fixed point property of L can be expressed by saying that x and y are the same point:

As expressed by Alessandro Padoa at the International Congress of Mathematicians (see page 357 of the Proceedings), x is collinear with a and b if there is no other point y which satisfies the congruences

According to James T. Smith (2010)(American Mathematical Monthly 117:480), this characterization of collinearity was adapted from Gottfried Leibnitz.

Consequently, a line through points a and b in the Euclidean plane can be defined in terms of congruence of point pairs as follows:

However, note that the notion of set formation is required in addition to the primitive notions of point and congruence.

In Giuseppe Peano's geometry distance is taken as primitive and lines defined. The following formulation was given by Bertrand Russell on page 410 of The Principles of Mathematics:

The straight line ab is the class of points x such that any point y, whose distances from a and b are respectively equal to the distances of x from a and b, must be coincident with x.

To avoid the intricacies of set theory, Alfred Tarski has fashioned a Euclidean geometry without lines in his system of Tarski's axioms, content that the geometrical meaning of a line is sufficiently represented by logical collinearity.

In analytic geometry, points A, B, and C are collinear if vector AB is parallel to vector BC, or equivalently, if the slopes of lines AB and AC are equal.

In Euclidean space, Rn (and analogously in all other vector spaces), we define a line L as a subset of the form

where a and b are given vectors in Rn with b non-zero. The vector b describes the direction of the line, and a is a point on the line. Different choices of a and b can yield the same line.

The "straightness" of a line, interpreted as the property that it minimizes distances between its points, can be generalized and leads to the concept of geodesics on differentiable manifolds.