Montenegro has a number of significant cultural and historical sites, including heritage sites from the pre-Romanesque, Gothic and Baroque periods.

The Montenegrin coastal region is especially well known for its religious monuments, including the Cathedral of Saint Tryphon[1], the basilica of St. Luke (over 800 years), Our Lady of the Rock (Škrpjela), the Savina Monastery, the Cetinje Monastery and others.

This area, sometimes called Venetian Montenegro, is full of Venetian architecture, mainly in Cattaro (Kotor) and Perasto (Perast): the ancient city of Cattaro is listed on the UNESCO World Heritage list.

The Byzantine influence in architecture and in religious artwork is especially apparent in the country's interior.

The majority of architecture of Montenegro is Byzantine, Latin or Venetian (Gothic, Romanesque, Baroque) and Ottoman.

The architecture of "Storica Cattaro" (venetian for "Stari Kotor")

Four centuries of Venetian domination have given the city the typical Venetian architecture, that contributed to make Kotor a UNESCO world heritage site.[2] 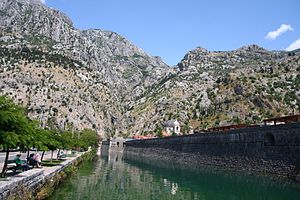 The Venetian fortifications of Kotor

The Venetian fortification system of Kotor (that venetians called "Cattaro"), which protects it from the sea, is actually a wall 4.5 km long, 20 m high and 15 m wide, and is preserved as one of the world's historic values by the UNESCO.

The construction of the ramparts were built and rebuilt up to the XVIII century. The oldest town gate of Cattaro, of the three existing in the town, is the “South” gate which was partially constructed in the IX century. The “North” and the “Main” gates were build in the Renaissance style by the first half of the XVI century. The most representative monument of Roman architecture in the Adriatic is the magnificent Cathedral of Saint Tryphon, constructed in 1166 and built on the remains of the former temple from the IX century. There are the remains of the frescos from the XIV century and the valuable treasury with domestic and Venetian golden works dating from the XIV to the XX century.

Besides the Cathedral, in the heart of the old town, there are magnificent examples of sacral architecture originating from XII till XX century: 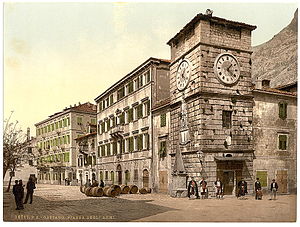 There are also numerous palaces in venetian style in the Kotor Stari Grad: