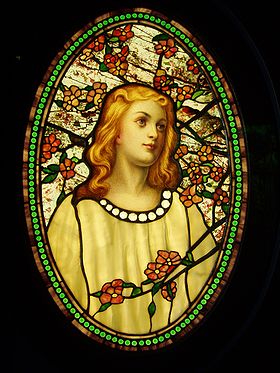 Tiffany glass refers to the many and varied types of glass developed and produced from 1878 to 1933 at the Tiffany Studios, by Louis Comfort Tiffany.

In 1865, Tiffany traveled to Europe, and in London he visited the Victoria and Albert Museum, whose extensive collection of Roman and Syrian glass made a deep impression on him. He admired the coloration of medieval glass and was convinced that the quality of contemporary glass could be improved upon. In his own words, the "Rich tones are due in part to the use of pot metal full of impurities, and in part to the uneven thickness of the glass, but still more because the glass maker of that day abstained from the use of paint".

Tiffany was an interior designer, and in 1878 his interest turned towards the creation of stained glass, when he opened his own studio and glass foundry because he was unable to find the types of glass that he desired in interior decoration. His inventiveness both as a designer of windows and as a producer of the material with which to create them was to become renowned.[1] Tiffany wanted the glass itself to transmit texture and rich colors and he developed a type of glass he called Favrile.

Scholars have determined that the glass was produced by a team led by Tiffany, but including other designers such as Clara Driscoll.[2][3]

The term opalescent glass is commonly used to describe glass where more than one color is present, being fused during the manufacture, as against flashed glass in which two colors may be laminated, or silver stained glass where a solution of silver nitrate is superficially applied, turning red glass to orange and blue glass to green. Some opalescent glass was used by several stained glass studios in England from the 1860s and 1870s onwards, notably Heaton, Butler and Bayne. Its use became increasingly common. Opalescent glass is the basis for the range of glasses created by Tiffany.[4]

Favrile glass often has a distinctive characteristic that is common in some glass from Classical antiquity: it possesses a superficial iridescence. This iridescence causes the surface to shimmer, but also causes a degree of opacity. This iridescent effect of the glass was obtained by mixing different colors of glass together while hot.

"Favrile glass is distinguished by brilliant or deeply toned colors, usually iridescent like the wings of certain American butterflies, the necks of pigeons and peacocks, the wing covers of various beetles." 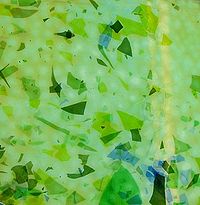 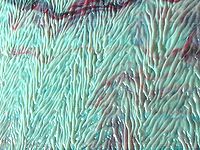 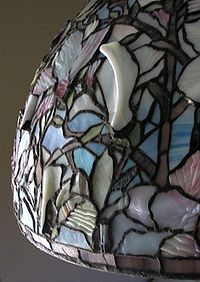 Drapery glass incorporated in a reproduction of Tiffany's "Magnolia" lampshade

Streamer glass refers to a sheet of glass with a pattern of glass strings affixed to its surface. Tiffany made use of such textured glass to represent, for example, twigs, branches and grass.

Streamers are prepared from very hot molten glass, gathered at the end of a punty (pontil) that is rapidly swung back and forth and stretched into long, thin strings that rapidly cool and harden. These hand-stretched streamers are pressed on the molten surface of sheet glass during the rolling process, and become permanently fused.

Fracture glass refers to a sheet of glass with a pattern of irregularly shaped, thin glass wafers affixed to its surface. Tiffany made use of such textured glass to represent, for example, foliage seen from a distance.

The irregular glass wafers, called fractures, are prepared from very hot, colored molten glass, gathered at the end of a blowpipe. A large bubble is forcefully blown until the walls of the bubble rapidly stretch, cool and harden. The resulting glass bubble has paper-thin walls and is immediately shattered into shards. These hand blown shards are pressed on the surface of the molten glass sheet during the rolling process, to which they become permanently fused.

Fracture-streamer glass refers to a sheet of glass with a pattern of glass strings, and irregularly shaped, thin glass wafers, affixed to its surface. Tiffany made use of such textured glass to represent, for example, twigs, branches and grass, and distant foliage.

The process is as above except that both streamers and fractures are applied to sheet glass during the rolling process.

Ripple glass refers to a sheet of textured glass with marked surface waves. Tiffany made use of such textured glass to represent, for example, water or leaf veins.

The texture is created during the glass sheet-forming process. A sheet is formed from molten glass with a roller that spins on itself, while travelling forward. Normally the roller spins at the same speed as its own forward motion, and the resulting sheet has a smooth surface. In the manufacture of rippled glass, the roller spins faster than its own forward motion. The rippled effect is retained as the glass cools.

Ring mottle glass refers to sheet glass with a pronounced mottle created by localized, heat-treated opacification and crystal-growth dynamics. Ring mottle glass was invented by Tiffany in the early 20th century. Tiffany's distinctive style exploited glass containing a variety of motifs such as those found in ring mottle glass, and he relied minimally on painted details.

When Tiffany Studio closed in 1928, the secret formula for making ring mottle glass was forgotten and lost. Ring mottle glass was re-dicscovered in the late sixties by Eric Lovell of Uroboros Glass. Traditionally used for organic details on leaves and other natural elements, ring mottles also find a place in contemporary work when abstract patterns are desired.

Drapery glass refers to a sheet of heavily folded glass that suggests fabric folds. Tiffany made adundant use of drapery glass in ecclesiastical stained glass windows to add a 3-dimensional effect to flowing robes and angel wings, and to imitate the natural coarseness of magnolia petals.

The making of drapery glass requires skill and experience. A small diameter hand-held roller is manipulated forcefully over a sheet of molten glass to produce heavy ripples, while folding and creasing the entire sheet. The ripples become rigid and permanent as the glass cools. Each sheet produced from this artisanal process is unique.

In order to cut streamer, fracture or ripple glass, the sheet may be scored on the side without streamers, fractures or ripples with a carbide glass cutter, and broken at the score line with breaker-grozier pliers.

In order to cut drapery glass, the sheet may be placed on styrofoam, scored with a carbide glass cutter, and broken at the score line with breaker-grozier pliers, but a bandsaw or ringsaw are the preferred.