: "This article is about the politician. For the actor, see ." Infobox_Politician
name = Gerard Kennedy 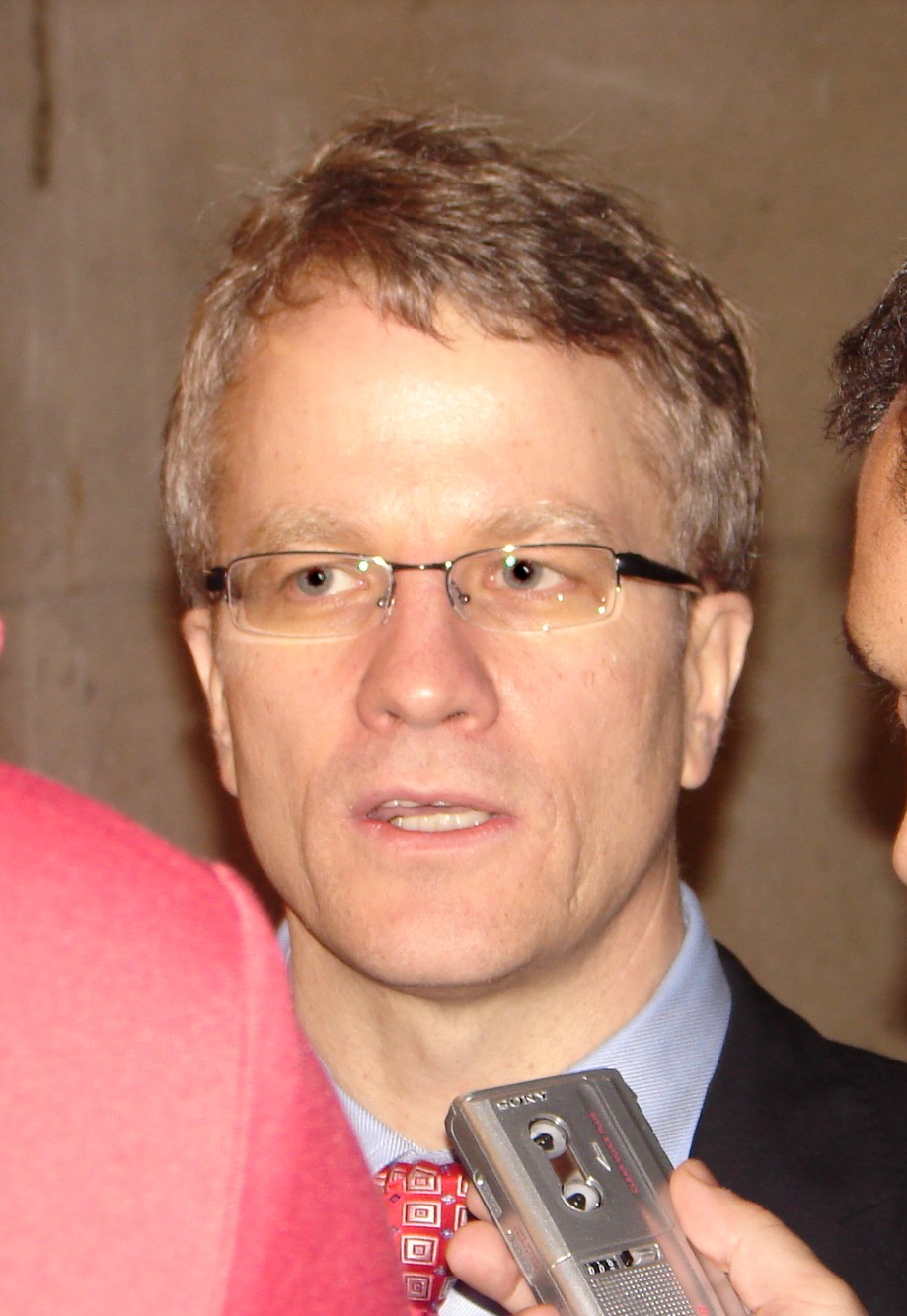 Gerard Michael Kennedy, (born in The Pas, ) is a Canadian politician. While attending the in Edmonton, he became involved in the local , eventually becoming its first in 1983. In 1986, he moved to to run the Daily Bread food bank, which he did until entering politics in 1996.

In 2006, he resigned his cabinet post in order to seek leadership of the . He finished third in delegate selection meetings, but at the , he placed fourth on both the first and second ballot before withdrawing to support eventual winner .

The son of a Liberal mayor of The Pas, Kennedy attended the on a hockey scholarship before enrolling at in Peterborough, , in 1977. He worked as a historical researcher for the Government of in the early 1980s, attended the , and then left it, without graduating, to work at and head up the "Edmonton Food Bank" (Canada's first Food Bank) in 1983.

After moving to Ontario, Kennedy was the executive director of Toronto's "Daily Bread Food Bank" from 1986 to 1996. The food bank distributed $30 million worth of food each year without government funding; 150,000 people are estimated to have used its services every month. Kennedy was named in "" Magazine's list of fifty influential people in 1992, and was named newsmaker of the year by the "" in 1993. Kennedy was also given an honourable mention in the ""'s C.E.O. awards in 1995Fact|date=February 2007.

Kennedy entered political life in May 1996, running in a for the Ontario legislature in the Toronto riding of , which was being vacated by former provincial New Democratic Party (NDP) leader . Kennedy was the first candidate not from the NDP or its predecessor, the , to win the seat since 1955. He received 7774 votes; his nearest competitor was Toronto city councillor David Miller of the NDP, who took 6656 votes.

Despite being a newcomer to politics, Kennedy became the front-runner to replace as leader of the Ontario Liberal Party in late 1996. Although popular on the left-wing, he encountered a strong "anyone-but-Kennedy" movement from the party's establishment and right-wing which was divided among several candidates on the leadership convention floor.Fact|date=October 2008 Kennedy finished first on the first, second, third and fourth ballots, but was defeated on the fifth ballot by . Although McGuinty finished in fourth place on the first ballot, he was able to increase his support in the subsequent ballots, gaining delegates from the candidates that dropped off. The results of the leadership contest did not prove divisive within the party and both rivals eventually became strong allies. Kennedy served as the party's Health Critic during McGuinty's first opposition term.

Kennedy wanted to run in the redistributed riding of in the Ontario provincial election of 1999, but was forced to step aside for former leadership rival . He instead ran in the neighbouring riding of where he faced an interesting challenge from , another former Liberal leadership challenger who had defected to the governing Progressive Conservatives on the last sitting day of the legislature. Many anticipated that this would be a close race, but it was not: Kennedy won by over 10,000 votes.

The Progressive Conservatives were re-elected, and Kennedy became opposition critic for the high-profile Education portfolio.

The Liberals won a majority in the Ontario provincial election of 2003, and Kennedy was re-elected in Parkdale-High Park with about 58% of the vote (his nearest opponent received 16%). He was appointed Minister of Education on , . Under previous governments, the Education portfolio had been marked by considerable labour strife. In 1993 the NDP government skipped negotiations with the public sector unions to implement mandatory days off without pay. There were province-wide teachers's strikes when the PC government attempted to implement a restructuring program in 1996 and 1998, and many boards experienced work-to-rule campaigns that reduced extracurricular activities.

In the spring of 2005, Kennedy announced the establishment of a provincial framework in teacher's negotiations, which would see teacher's salaries increase by approximately 10.5% over four years in exchange for four years of labour peace. The framework includes priorities such as workplace preparation courses and English as a Second Language programs.

On October 26th, Kennedy was awarded the inauguaral Ontario Student Trustees' Association "Award of Distinction" for his contributions to education, including his expansion of the role of student trustee.

On , Kennedy resigned as Minister of Education to pursue the federal Liberal Leadership. Premier McGuinty, who admitted that finding a replacement was difficult, was reported to have set that day as a deadline for Kennedy to make a decision in order to prevent the leadership speculation from overshadowing the Ontario government's agenda.

On May 18, Kennedy formally resigned from the provincial legislature. This was after several weeks of criticism over drawing an MPP's salary, despite his absence from the legislature and his stated intention to live for part of the summer in Quebec. Kennedy responded saying that he intended to resign his seat "sooner rather than later," but first wanted to finish some local projects he'd been working on. "We've been working hard to deliver some things that riding needs, funding for some of the hospitals, some other projects, and I think we're very close on that", he told The Canadian Press in an interview from Moncton, N.B.

The Opposition at Queen's Park speculated that Premier McGuinty asked Kennedy to delay his resignation as the Liberals feared losing his riding in a . There was also a published report that said that McGuinty asked Kennedy to postpone his resignation to delay a provincial byelection. Kennedy dismissed the claims, saying "I want people to know emphatically that the only consideration here has been how to make sure the people of Parkdale-High Park are best served by my decision to pursue a federal post, and that's between me and my constituents." The riding which some have described as an NDP stronghold was particularly indicative of Kennedy's personal popularity (due to his work as food bank director and education minister) versus that of his party; could not retain the seat for the Liberals in a subsequent by-election, apparently being unable to "ride the coattails of Kennedy's popularity". [ [http://www.theglobeandmail.com/servlet/story/RTGAM.20060915.wbyelection15/BNStory/National/home The Globe and Mail - "NDP thumps Liberals in vicious Ontario by-election"] ]

On , The "" reported that Gerard Kennedy appeared to have signed up more new members than any other candidate in the period of the race geared towards member recruitment. The article says that it had been "conventional widsom" that and were the leaders in the race but "(t)hese numbers would indicate a change in the dynamic of the race".

On September 8, 2006, , MP for and Gerard Kennedy's Ontario Co-Chair, announced that he would be resigning his seat in the House of Commons to run for mayor in London. Though it was speculated Kennedy would run in the by-election [ [http://lfpress.ca/newsstand/News/Local/2006/10/24/2114138-sun.html London Free Press - "Byelection race taking shape: The Tories and NDP hold nomination meetings this week, while the Grits are still scrambling."] ] , he declined, stating that the riding would be better served by a local candidate who could devote the appropriate time to the campaign. [ [http://www.canada.com/topics/news/story.html?id=e5d16ddd-fc13-42aa-8f96-b63b016ffea8&k=87942 canada.com - "Gerard Kennedy not running in byelection"] ]

On "Super Weekend", from September 29 to October 1, the Liberal Party elected approximately 85% of delegates. Kennedy finished in third place with 17.3% of delegates being pledged to his campaign, a similar number to , who received 16.0% and to who received 20.3%. (Note: At the December Liberal leadership convention, the "Super Weekend" elected delegates were bound (or committed) to vote on the first ballot for the leadership candidate they had pledged to support. On the second and subsequent ballots, however, the delegates were - if they wished - able to switch their votes to another candidate.)

On , Kennedy attracted a great deal of media attention when he became the first leadership candidate to oppose a motion being debated in the , of which he is not a member, that would have declared the Québécois "a nation within a united Canada". Kennedy was joined in that position later that day by fellow candidates and .

At the convention, Dion passed Kennedy on the first ballot of voting, finishing ahead of Kennedy by two votes (17.8% to 17.7%). That gap increased to 2% after the second ballot (20.8% to 18.8%). Kennedy chose to leave the ballot before he would have been forced to, and supported Dion. Earlier, the two leadership contenders had allegedly struck a pact in which the first off the ballot would throw his support to the other. Pundits said that this surprise move had caught the Ignatieff and Rae strategists off guard. Kennedy delivered his delegates extraordinarily en masse, as Dion's support increased to 37.0% on the third ballot, moving from third place to first and eliminating Rae. Dion retained the position for the fourth and decisive ballot which resulted in him winning the leadership. [ [http://www.ctv.ca/servlet/ArticleNews/story/CTVNews/20061202/liberal_balloting_061202/20061202?hub=TopStories CTV.ca - "'Gesture' might have helped trigger Dion win"] ]

On , Dion announced that Kennedy would be his special advisor on election readiness and renewal with "intimate involvement in all aspects of election readiness and the platform." Kennedy is also the chair of the mentorship committee. [ [http://www.brooksbulletin.com/news/national_news.asp?itemid=59939 Canada National News - The Brooks Bulletin ] ] Kennedy said that his duties as election readiness advisor ended in the summer of 2007, but he continues as a special advisor to Stéphane Dion. Kennedy has also appeared regularly as a strategist for the Liberals on television and is often quoted as a Liberal spokesman in .

On , , Kennedy confirmed that he will seek the Liberal nomination for in the next federal election. Kennedy previously held the riding as a ; the riding is currently held federally by New Democrat . Kennedy won the nomination by acclamation on , . [ [http://www.cbc.ca/canada/toronto/story/2007/04/24/kennedy-liberal.html CBC.ca - "Kennedy named federal Liberal candidate for Toronto riding"] ]

In late August 2007, Kennedy entered the world accepting a position at the at . He will serve a one year term as a until September 2008. [ [http://www.gerardkennedy.ca/story.aspx?id=209] ]

In late September 2007, Kennedy was part of a group observing Ukraine's parliamentary elections in the electoral commission. Kennedy reported back to the Canadian media that the group he was a party to was confronted by Ukrainian police who stripped passports and observer statuses. Kennedy said that the police were interfering in the process, and the observer group felt intimidated by the police who carried weapons and followed the group around for a day. Kennedy concluded that there were major flaws in the voting process, as the group was also witness to extra ballots being distributed. [ [http://www.ctv.ca/servlet/ArticleNews/story/CTVNews/20070928/ukraine_police_070928/20070928?hub=TopStories] ]

On , notwithstanding the fact that he is not a member of the , Kennedy was appointed to the Official Opposition Shadow Cabinet by leader Stéphane Dion. Kennedy serves as Intergovernmental Affairs critic, which gives him responsibility to speak on behalf of the Liberal Party on matters of federal-provincial relations. [ [http://canadianpress.google.com/article/ALeqM5jpAJqFz8-kjU3AwtWS58OeDprWWw] ]

Kennedy is married to Jeannette Arsenault-Kennedy, a day care professional and (Francophone) from Prince Edward Island. They have two young children, daughter Théria and son John-Julien.

Sometimes mistakenly identified as Irish, Kennedy is actually of Scottish and Ukrainian heritage.