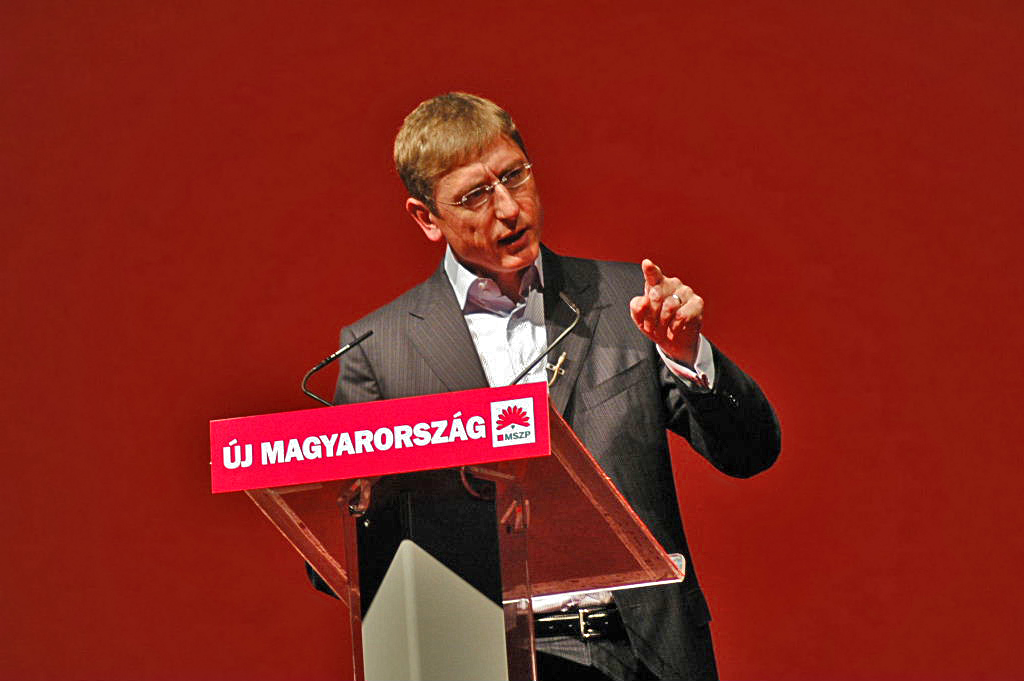 Audio|gyurcsany_ferenc.ogg|Ferenc Gyurcsány (pronounced|ˈfɛrɛnts ˈɟurtʃaːɲ; born in , , ) is the Prime Minister of . He was nominated to take that position on , by his party, the , after resigned due to a conflict with the coalition partner. Gyurcsány was elected to be Prime Minister on , with a parliamentary vote (197 "yes" votes, 12 "no" votes, and the greatest opposition party in Parliament not voting). He led the coalition to victory in the parliamentary elections in 2006, securing him another term as Prime Minister.On , he became the leader of his party with gaining 89% of the votes.

Gyurcsány was born in the city of , in western Hungary. He attended the prestigious Apáczai Csere János High School in Budapest for two years, then he left to his hometown Pápa to graduate. He studied as a teacher and obtained his B.Sc. in 1984 from . Then he studied at the same institution, getting his degree in 1990.

In 1981 he assumed function in the KISZ, the , where he mostly handled organizing student programs at the beginning. Between 1984 and 1988 he was the vice president of the organisation's committee in . During his academic years he also worked as an informant for the communist state. Then between 1988 and 1989 he was the president of the central KISZ committee of universities and colleges. After the political change in 1989 he became vice-president of the organisation's short-lived quasi successor, the DEMISZ.

From 1990 onwards, he transferred from the public to the , working for CREDITUM Financial Consultant Ltd., EUROCORP International Finance Inc. where he was Director, and later Altus Ltd., a holding company of which he was owner, CEO (1992-2002) and later Chairman of the Board

He returned to politics in 2002 as the head strategic advisor of , the previous PM. From May 2003 until September 2004 he was a minister responsible for sports, youth and children.

He became the president of the MSZP in county in January 2004, serving until September 2004. In the summer of that same year it seemed that there were larger problems in his relationship with then current PM Péter Medgyessy, so he resigned as minister. In a week, problems in the coalition led to the resignation of Medgyessy, and MSZP voted Gyurcsány to become as he was acceptable for the coalition partner, SZDSZ.

On , he became the leader of his party (being the only candidate for the post) gaining 89% of the vote.

Since his 2006 election victory he has introduced austerity measures to tackle Hungary's budget deficit that had become a staggering 10% of the GDP by the end of 2006. These austerity measures have been criticized by the main opposition party on the one hand as being too harsh on the people, on the other hand by conservative economists for not reducing spending enough on social benefits, including pensions.Gyurcsány has been the first since the fall of communism to try to introduce a health care reform in order to rationalize and modernize the national health care system. His efforts for a renewed and more efficient health care however, have been undermined mainly by his own party, as many Socialist Party members regard this reform as a threat to the communist era achievement of free and equal health care service to all.

On , an audio recording surfaced, allegedly from a closed-door meeting of the Prime Minister's party MSZP, held on , shortly after MSZP won the election. On the recording, Gyurcsány admitted "we have obviously been lying for the last one and a half to two years." Despite public outrage, the Prime Minister refused to resign, and a series of demonstrations started near the , swelling from 2,000 to about 8,000 demonstrators calling for the resignation of Gyurcsány and his government for several weeks. The Prime Minister admitted the authenticity of the recording.

On , the governing party suffered a landslide defeat in the local municipal elections. [http://www.valasztas.hu/outroot/onkdina/g12.htm] On the eve of the elections, before the results were known, President gave a speech in which he said that the solution to the situation is in the hands of the majority in Parliament. [ [http://index.hu/politika/belfold/soly1001/ Sólyom: Most az Országgyűlésnek van cselekvési lehetősége] , Index, ]

As a Prime Minister, Ferenc Gyurcsány is a strong advocate of the South Stream pipeline project, which is aimed to supply Russian gas directly to EU, bypassing transit countries such as Ukraine. He signed the contract in Moscow just a week before popularal election at Hungary, which showed around 80% of the votes were against the government reforms.

The origin of his wealth is regularly questioned by the media and political opposition. The weekly paper "HVG" writes about a biography of Gyurcsány: " [it] concludes that talent played a greater role than corruption in Gyurcsány's success. We have to question this claim. Not just because former functionaries are massively overrepresented among Gyurcsány's business partners, but also because, despite his enormous talent for business, Gyurcsány would never have got where he is today without making use of the contacts and support base of the former state party."

Opposition MP Péter Szijjártó, as the head of a committee set up to investigate the origins of Gyurcsány's wealth, stated in his report that one of Gyurcsány's companies leased the former vacation site of the Hungarian government in Balatonőszöd and rented the site back to a state-owned company so that the rent paid by the government covered exactly the leasing fee during the first two and a half years of the ten-year lease term (1994-2004).

A person named "Gyurcsányi" was mentioned by , the main defendant in the high-profile "K&H Equities" money laundering scandal in Hungary.

On , at the birthday party of the , for the sake of a joke, he referred to the players of the Saudi national football team as terrorists. Later he apologized, but the kingdom recalled its ambassador from Hungary for a time.

During the 2006 general election campaign, a video appeared where Gyurcsány danced as in "".

After his return to politics, Gyurcsány was at first tight-lipped on his religious affiliation, leading many to assume that he is an . In an interview aired on TV2 during the 2006 parliamentary election campaign, Gyurcsány said that as a teenager, he "took part in for about two years" and even considered becoming a .

In connection with the unrest fuelled by his speech, he has been criticised in "" for "turning a blind eye to police brutality". [ [http://www.economist.com/daily/columns/europeview/displaystory.cfm?story_id=8491837 Europe.view] , "", ]

The opposition decried him for not disclosing information about the state of the Hungarian economy before the 2006 elections, as mandated by the Hungarian constitution

As a Prime Minister, Ferenc Gyurcsány is a strong advocate of the pipeline project, which is aimed to supply Russian gas directly to EU, bypassing transit countries such as Ukraine. He signed the contract in Moscow just week before a referendum at Hungary, which showed around 80% of the votes were against the government reforms. There are rumors that Gyurcsány would become the head of the new company in a similar manner like became the head of after stepping down.