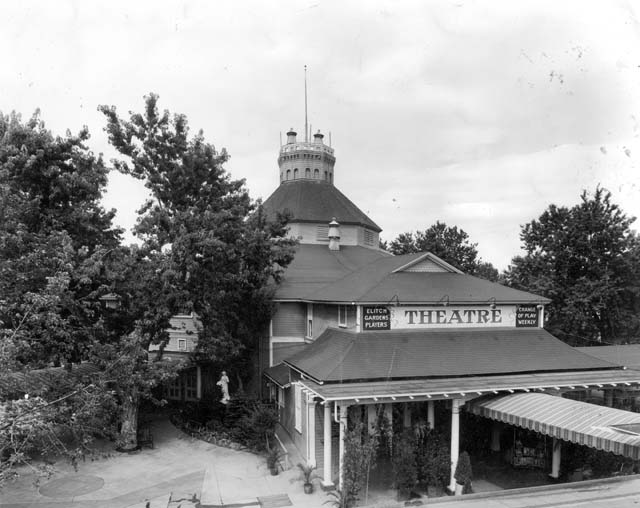 Elitch Theatre is an 1891 Shingle Style theatre located at the original site in northwest . It was home to the United States' oldest summer-stock theater company from 1897 until 1963, created and developed by John and Mary Elitch, and was ready to open for its first season in 1897. The delay was due to the fact that John, himself a performer, died in 1891 at the age of 41. His wife dedicated the theatre to her handsome husband's memory, and lived next to it, keeping it going until her death in 1936. When the grounds closed in 1994 to make room for developers, a stipulation was made that the theatre must never be demolished, and it is now, in fact, being renovated, turning into a repository for Denver theatrical memorabilia. Its new name will be the Center for American Theatre at Historic Elitch Gardens.

When Elitch Gardens began in 1890, it had a round, open-sided theatre known as Playhouse in the Gardens. It grew into a larger, circular enclosure inspired by 's and finally into a wooden octagon two stories high with a tent-shaped shingle roof crowned by a flag pole.

Its first season in 1897 opened with leading man James O'Neill, (whose son became America's foremost playwright Eugene), who had promised John that he would act in the new theater when it was ready. The first show performed there was "Helene".

came to Denver in 1906 after the San Francisco earthquake destroyed the theatre where she had been scheduled to perform. At Elitch's she played "Camille" at the s and "LaSorcier" at night. was hired into the same company.

With the purchase of Elitch Gardens by John Mulvihill in 1916, Mary Elitch stepped down from control of the theater, but among her purchase conditions was a stipulation that two lower boxes would always be reserved in her name. Mulvihill oversaw the theatre until his death in 1930 and was succeeded by his son-in-law Arnold Gurtler.

In 1953, the Elitch Theatre was used for two days to film scenes for "". It stopped operating as a traditional resident summer-stock company in 1963, switching to single, star-packaged shows out of New York under a special Actors Equity contract. Broadway stars would be very happy to create a show featuring themselves during the summer hiatus, and perhaps bring their family along for the fun of it. A show would play for one or two weeks, before moving on. Denver and Elitch Gardens became the Western-most stop on the summer circuit. The theatre's last season was 1987, and it closed in 1991. The Elitch Gardens amusement park moved to a central Platte Valley location in 1994 and the original Elitch property was sold to Perry Affordable Housing in 1996 with the condition that the theater never be demolished. [Sinisi, J. Sebastian. "Landmark status urged for Elitch Theatre". "Denver Post", August 29, 1995: B-03]

The Historic Elitch Gardens Theatre Foundation was formed in 2002 to restore and maintain the Elitch Gardens theatre and carousel pavilion. [" [http://denver.bizjournals.com/denver/stories/2006/04/17/daily7.html Elitch Theatre announces restoration plan] ". "Denver Business Journal". April 17, 2006] In 2006, groundbreaking for the renovation of the theatre began with restoring the building's exterior, including pouring a foundation for the building. [Voelz Chandler, Mary. " [http://denvernews.info/drmn/other_spotlight/article/0,2777,DRMN_23960_4916904,00.html Cleaning up its act] ". "Rocky Mountain News". August 15, 2006.]

List of stars that have appeared at Elitch's Theatre