Mariusz Zbigniew Pudzianowski (born on February 7, 1977 in Biała Rawska) is a Polish former strongman and current mixed martial artist. His nickname in Poland is "Pudzian".

During his career as a strongman, Pudzianowski has won five World's Strongest Man titles—more than any other athlete—as well as two runner-up titles (including his most recent performance in the 32nd edition). In 2009, Pudzianowski debuted as a mixed martial artist.He is considered as the best strongman that has ever competed in the history of the sport.

Mariusz Pudzianowski was born in Biała Rawska, Poland. His father, Wojciech, was a weightlifter.[1] Pudzianowski quickly became interested in sports. Since the age of 11, he has been training the Kyokushin style of karate.[2] His current grade is 4th kyu green belt.[2] He began strength training at the age of thirteen.[2] When he was fifteen, Pudzianowski also started training boxing, quitting after seven years.[2][1]

Pudzianowski debuted in professional sports at the age of sixteen, taking part in Polish Weightlifting Championship, in the bench press event.[2]

Pudzianowski was incarcerated in prison in Łowicz.[2][1] Several years later he arranged a resocialization meeting for the prisoners at the same penal institution.[3]

"Wojciech Harpula (journalist): Why did you end up in jail?

Mariusz: Because of the "boss" from my birthplace Biała Rawska. He is a rich, influential chap. I couldn't just stand and watch as he physically abused a young boy. He hit the boy until he fell down, and then he kicked him and stood with his shoe on his face. It was that scene with the shoe that made me lose it. It is difficult to upset me, but when I am angry then you have to beware.

WH: And what did you do?

Mariusz: I went into action. This guy was about as tall as me and of similar size and he was an ex boxer. Back then in 2000 I didn't look as I am looking today and I wasn't a Strongman World Champion, but I showed him what it means to get. I defended the weaker, because that's what I've been taught at home. And the big boss went to the police as a "crying baby" [in the original: as a "baba" - "a woman"]. His mates advised him how to frame me.

Mariusz: He accused me not only of assault, but also of stealing of a gold chain. This is ludicrous, I have never even seen any gold chain. The court freed me from the charge of theft, but not the assault. I got first 3.5 years in jail, and after the appeal 2.5 years. I was released earlier for good behaviour. I have never been a thug, I did not make trouble. Unfortunately, the law is, as it is. Somebody could caught you on the street and beat you up. You do somebody justice, and because you are stronger, then the other party will be considered as more of a victim than you. And then you will be put in jail.

WH: You can always do not do somebody justice.

Mariusz: Oh no. I do not turn the other cheek. I do somebody justice."

Mariusz said that many famous gangsters proposed him a job. He was supposed to extort protection money:

""Someone who has never done time cannot understand this world. You cannot do anything yourself. Even big muscles would not help. There are two main groups among all prisoners: those who inform against others and those who live according to their own rules. I lived according to the rules, but would never come back there again. I went to the prison because I tried to help a young boy who was punched by the other guy. He was defenceless so I decide to help him. As a result, I was accused and sentenced" – said famous strongman." "“You can earn very easy money, you will be rich very soon” – said important people from the “underground”. “I did not agree, and I do not regret this decision”."[4][5] 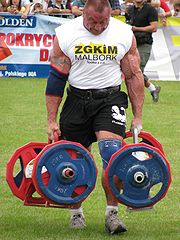 Pudzianowski during a strongman competition in 2009.

On May 1, 1999 Pudzianowski entered his first Strongman competition, held in Płock, Poland.[2] He achieved his first major success at the international level in 2000 when he finished fourth in his first World's Strongest Man (WSM) competition.

Pudzianowski could not participate in some of 2000 and all of 2001 events because of his imprisonment (see above).

He returned to win the WSM contest in 2002, and retained his title in 2003 by the largest margin ever achieved in the competition. In March 2004, he also became the Strongman Super Series World Champion.

He initially finished third in the 2004 WSM contest but was later disqualified for breaching the governing body's Strongman Health Policy.[6] He was forced to return his prize money, stripped of the International Federation of Strength Athletes points from the event, and received a one-year ban from competition. Pudzianowski did not dispute his banned substance violation and waived his right to have his stool sample verified.[citation needed] He then returned to win the title for a third time in 2005.

In the 2006 World's Strongest Man contest, he came second to Phil Pfister.

Pudzianowski regained his title in 2007, winning with one event to spare (which he had also done in 2003 and 2005). At that time he was one of the three four-time winners (the other two being Jón Páll Sigmarsson and Magnús Ver Magnússon).

In the WSM 2007 competition, Pudzianowski said that his target was to become the only person to win the event five times, which he did by winning the 2008 WSM competition in the very last event, ahead of Derek Poundstone. He succeeded despite a serious calf injury, which he suffered in the Polish Strongman Championship Cup of 2008 and further exacerbated during the WSM qualifying rounds, seriously threatening his chance of even reaching the final.

He competed in the 2009 World's Strongest Man competition, which took place in Malta, placing second after Žydrūnas Savickas. In an interview, Pudzianowski said he will not continue participating in strongman events, because of his career in Mixed Martial Arts, which requires a totally different training to strongman.[7]

Achievements as a strongman 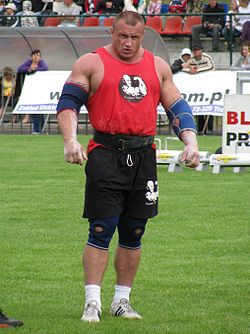 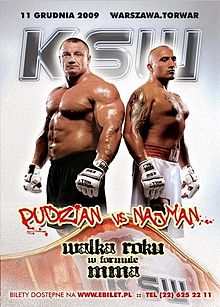 The debut of Pudzianowski and Najman was advertised as "MMA Fight of the Year" in Poland.

He debuted as a mixed martial arts fighter on December 11, 2009, during the KSW 12 event in Warsaw, Poland, winning against Marcin Najman, a professional boxer (who, at that time, was also a MMA newcomer).[8][9] Pudzianowski started throwing low kicks soon after the fight began. After several hits, Najman fell to the mat and Pudzianowski started delivering punches (a tactic known as ground-and-pound).[9] Najman was forced to tap the mat, indicating he wanted to end the fight, which lasted for only 43 seconds.[8][9] Before the fight Mariusz said: "Lewa ręka niesie za sobą śmierć, a prawej sam się boję." (English: "The left hand brings death, but the right one even I am afraid of.") [10][11] Pudzianowski collected 200,000 złotys (70,000 USD) for the fight.[8]

On May 7, 2010, during the KSW 13 event, Pudzianowski won his second fight, against Yusuke Kawaguchi.[12][13] The fight lasted full two rounds, with Pudzianowski winning by judges' decision. The fight was described as a "sloppy brawl".[13] It was noted Pudzianowski had control over most of the fight, but was "neutralized" by Kawaguchi, and that, by the second round, he was looking "to be out of energy and breathing heavily".[12]

On May 21, 2010, Pudzianowski went on to participate in the Moosin: God of Martial Arts event, where he fought former two time UFC Heavyweight Champion Tim Sylvia. Pudzianowski fractured his metatarsus during the first round and then went on to deplete his stamina during the rest of the fight, which ultimately led to Sylvia defeating him via submission (punches) at 1:43 of round 2.[14][15]

Following his loss to Sylvia in May, Pudzianowski signed to face former heavyweight boxer and kickboxer Eric Esch, better known as 'Butterbean', at KSW 14 on September 18. After several brief standup exchanges, Pudzianowski secured a takedown early in the fight and was then able to dominate Esch with ground and pound. Esch, unable to get back to his feet during the attack, tapped out to the strikes, making Pudzianowski the winner by submission at 1:15 of the first round. He came into the fight notably slimmer, having lost around 20 lbs from his previous fight. Many believe his large muscle mass to have caused his stamina problems in his earlier fights.[16]

On May 21, 2011 Pudzianowski fought James Thompson at KSW XVI, losing by arm triangle.

Pudzianowski will be fighting on the KSW XVII event, which will be held on November 26 this year, where he will face James Thompson once again. [17]

On May 27, 2008 Pudzianowski graduated with a bachelor's degree in international relations. His thesis was: "Organizational culture in sports marketing in the world".[18]

In an interview in 2009 Mariusz said that he treats sport as a hobby. He is not doing it for money as the money is relatively low in Strongman and MMA (he said that winner of World Strong Man can get 60000 USD, and winner of Grand Prix in USA from 10000 to 15000 USD). He owns a very successful company (a school for bodyguards) and various real estates, and those are his main sources of money.[19]

Pudzianowski often appears as a guest singer in the musical group Pudzian Band, formed by his brother Krystian. Their first single "Zdobyć świat", was released in 2006. In 2009, the group released an album, Dawaj na ring (Go, hit the ring).[20]

In 2008, Pudzianowski took part in the 7th season of Dancing with the Stars in his native Poland.[21] He advanced to the final episode, but ultimately finished second, losing to actress Magdalena Walach.[22] Pudzianowski is currently a contestant in the 1st season of the singing reality show Just the Two of Us in Poland.[23] He is coupled with former Ich Troje singer Anna Wiśniewska.

Unlike many bodybuilders, Pudzianowski is surprisingly liberal with his diet and is often seen tucking into chocolate, ice cream or burgers.[27][28] On one of the World Stongman events shown on TV, as well as in an interview for MTV, Mariusz when asked about diet said: "I eat everything. I do not follow any particular diet. I eat anything I want, anytime I want".[29]

My energy comes from my diet. Breakfast is 10 eggs and two to three pounds of bacon. Between meals, I eat lots of candy. In the morning, it will be several 3 Musketeers and/or Snickers bars; I need them for energy. Lunch, at 1 or 2 PM, is a double meal of a Polish pork chop, sauerkraut and potatoes. An hour later, I work out, then take lots of supplements: magnesium, creatine, amino acids, all that stuff, and more chocolate. Dinner is whatever meat I can grab—steaks, pork chops, bacon—plus more sauerkraut and potatoes. At 9 or 10 PM, I work out again. Afterward, I have a protein shake and more chocolate. At 3 or 4 AM, I wake up and have more chocolate, then go back to sleep until morning.[30]

He said for MTV that he prefers Polish cuisine. When he has some time he often cooks himself, as he does not particularly fancy meals from restaurants. He often eats bigos, Polish soups, Polish sausages and typical Polish dinners with cooked potatoes, 200–300 g of meat and some salads (usually cucumber salad).[29]

In an interview at the beginning of his world strongman career he said that his supplements, training, massages, etc. costs him approximately 6000 złotys (ca. 2000 USD) per month.[31]