All the Real Girls

All the Real Girls 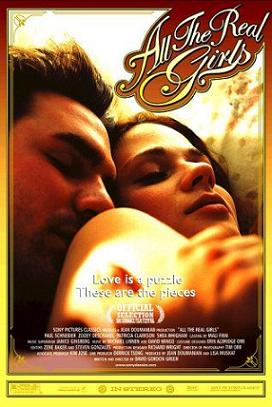 "All the Real Girls" is a 2003 film written and directed by . The film debuted at the on , . It stars , , , , , Maurice Compte and Benjamin Mouton. The film follows the romance between a young, small town womanizer, and his friend’s younger sister. While the film did not do so well at the box office, it was generally well received by critics and was nominated for several awards when it was shown at film festivals in 2003.

Paul is a womanizer in his early twenties who lives in a small Southern town, where he earns a living fixing cars for his uncle. Paul still lives with his mother, Elvira, who works as a clown cheering up children at the local hospital. He spends most of his time hanging out with his best friend and self-proclaimed partner-in-crime, Tip, and their friends Bo and Bust-Ass. Among his friends, Paul has a reputation as a ladies' man, but he's not at all known for being involved with long-term relationships; most of Paul's romances last only a few weeks, and he's slept with nearly every girl in town. Paul is beginning to reach a point where would like to lead a different life, and that feeling becomes all the more clear when he meets Noel, Tip's teenage sister who has come back home after attending a boarding school. Noel is more thoughtful and mature than the girls Paul is used to. Paul and Noel soon fall in love, but for Paul this is a different sort of relationship than he's accustomed to — Noel is still a virgin, and her contemplative nature gives him a desire to be a better, stronger person. However, Tip doesn't approve of Paul dating his younger sister, which leads to a rift between these longtime friends. The relationship grows more serious over time until Paul learns that Noel has cheated on him while visiting friends. While the two of them try to save the failing relationship, it never really works out even though the two of them still have obvious feelings for one another.

All the Real Girls was not a financial success at the box office. It was made on a budget of $2,500,000 and premiered on , at the . The film was released on , and played in six theaters, bringing in $39,714 in its opening weekend. By the time the film ended its theatrical run on , it had made $549,666. [http://boxofficemojo.com/movies/?id=alltherealgirls.htm]

"All the Real Girls" got mostly positive reviews when it was initially released in 2003. "All the Real Girls" currently has a 71% rating at rottentomatos.com [http://www.rottentomatoes.com/m/all_the_real_girls/] The film’s current rating on metacritic.com is 71 out of 100. [http://www.metacritic.com/video/titles/alltherealgirls?q=all%20the%20real%20girls] of the "" said “Green is 27, old enough to be jaded, but he has the soul of a romantic poet. , after all, was 36 when he published, ‘The Rainbow comes and goes and lovely is the Rose.’ How many guys that age would have that kind of nerve today?” He gave the film a four out of four star rating. [http://rogerebert.suntimes.com/apps/pbcs.dll/article?AID=/20030228/REVIEWS/41103001/1023]

"Love is a puzzle. These are the pieces."