Mergenthaler Vocational–Technical High School, commonly referred to as Mervo, is a public high school and trade school in Baltimore, Maryland. Mervo opened in 1953 as a vocational-technical school, and is named after Ottmar Mergenthaler. The school, according to its website, uses its curriculum to "educate students to function in an industrial and challenging technological society."[2] The trades carried at Mervo are Automotive Technology, Accounting, Commercial Baking, Food Service, Child Care, Business Administration, Computer Programming, Cosmetology, Barbering, Masonry, Cabinet Making, Printing, Drafting, Electrical Construction, Plumbing, Welding, Machine Tool Technology and Criminal Justice (added during the 2007–2008 school year). All students must apply and meet certain standards for acceptance to the school.

The football field was named Art Modell Field at Mervo in honor of Art Modell, the longtime owner of the Baltimore Ravens. The field's renovation was spearheaded by The Ravens All Community Team Foundation, Ravens owner Steve Bisciotti, CB Chris McAlister and the NFL Youth Football Fund. The $1 million project includes installation of a Sportexe turf field (like that at M&T Bank Stadium), additional bleachers on the home/away sides, a ticket booth and upgrades to the restrooms and concession stand. Serving as the primary home to the Mervo High School football team, the stadium will also host the Northwood Youth Football league and the Baltimore Nighthawks of the Independent Women's Football League. The new $1 million football stadium will bear the name of former Baltimore Ravens owner Art Modell.

The Official Mergenthaler Crest a Blue and Gold Cogwheel. Which is Representative of the Vocational and Technical industries that Mervo prepares its students for. 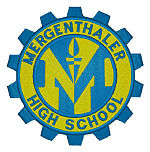 The Mergenthaler School song was penned in by the President of the Senior class of 1955. The Song is performed by the Mergenthaler Mass Choir before each school assembly after the playing of The Star Spangled Banner. The lyrics are as follows:

Mergenthaler, Mergenthaler. To thy colors we'll be true In the Shining Sun lies thy gold, In the Heavens thy Royal Blue. From the earth we grew to meet the sky, is there any wonder why? Our love burns strong for MVT! And the embers never die.

Alma Mater, Alma Mater, thy glories we will sing. Let thy Mergenthaler praises echo as our voices ring. For we love the spacious campus, and our spirit staunch and true. All the symbols that God gave to me! Wrought in Gold and Royal Blue.