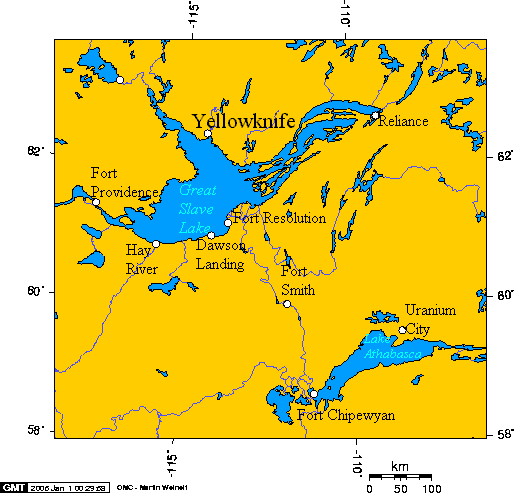 The area has been in use by First Nations, known as the Long Spear people as far back as 7000 BC.

According to the the first buildings were those of the in 1868 followed by a Roman Catholic Mission in 1869 and an Anglican Mission in 1894.

However, according to the town, the first permanent settlement in the area of Hay River was established in what is now the Katl'odeeche First Nation. This was sometime between 1892-93. This first settlement was established by Chief Chiatlo and a group of people by the building of log cabins and bringing dairy cows. This was followed in 1893 by the Anglican Mission, at the request of Chief Chiatlo in 1893 with the Roman Catholic Mission and the Hudson's Bay Company arriving later.

A school, health centre and the followed, and as part of the project the built a runway on . In the late 1940s the built a gravel road, now the , from Grimshaw, to Hay River making it the first community in the NWT to be linked with southern Canada.In 1959, the located their main base in Hay River and over the years developed the facilities. Today the base is the major staging point for the annual along the , via Inuvik and and the communities of the , as far east as Taloyoak, and west to Barrow, .

By 1964, as part of the development, the was constructed. The railway, through in , makes Hay River the northernmost point in Canada, and all of , which is connected to the continental railway system. The is located farther north but is orphaned from the network.

In 1978, Hay River along with, the now abandoned, Pine Point hosted the fifth .

The community has a full hospital, the H.H. Williams Memorial Hospital, a woman's shelter/transition house, a dental clinic and an ambulance service.

Radio stations in Hay River include, CBDJ-FM (93.7) broadcasting , (100.1), owned by , broadcast from , and (101.9) a station aimed at people also from Yellowknife, from and CKHR, a community radio station in Hay River.

The town controls television broadcasting and it is paid for through es and includes, , a community channel, CBEBT-1 from Yellowknife is the channel and CH4435 () broadcasting in French.

Internet services are provided by and , land based telephone by and cell phones by NMI Mobility.