/ˈtɪsɛn.krʊp/) is a German multinational conglomerate corporation headquartered in Duisburg Essen, Germany. The corporation consists of 670 companies worldwide. While ThyssenKrupp is one of the world's largest steel producers, the company also provides components and systems for the automotive industry, elevators, escalators, material trading and industrial services.[4] As of a 2009 reorganization [5], it is structured into eight business areas that fall under two major divisions, Materials and Technologies. The Materials division concentrates on carbon steel, stainless steel,and material services while the Technology Division concentrates on elevator, plant and components technology, and marine systems. The company is the result of the 1999 merger of Thyssen AG and Krupp, and is headquartered in the city of Essen. The largest shareholder is the Alfried Krupp von Bohlen und Halbach Foundation, a major German philanthropic foundation, created by and named in honour of Alfried Krupp von Bohlen und Halbach, former owner and head of the Krupp company, once the largest company in Europe..

ThyssenKrupp generates 33% of its consolidated sales on its home market. The rest of the EU (European Union) (28%) and the NAFTA region (21%) are the key foreign regions for its business outside Germany. ThyssenKrupp companies hold leading positions with their products in numerous international markets. ThyssenKrupp is the world's leading producer of tailored blank steel.[6] Tailored blanks weld steel materials of differing thicknesses.

ThyssenKrupp is the result of a merger of two German steel companies, Thyssen AG founded in 1891 and Krupp founded in 1811. As early as the 1980s, the companies began negotiations on a merger and began closely cooperating in some business areas. In 1997, the companies combined their flat steel activities, with a full merger completed in March 1999. [7] 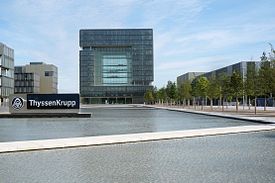 A view of the hot dip galvanizing lines at ThyssenKrupp Steel USA in Calvert, Alabama

In 2005, ThyssenKrupp acquired Howaldtswerke-Deutsche Werft (HDW) in Kiel from One Equity Partners. ThyssenKrupp Marine Systems (TKMS) is now the most important European group of shipbuilders. In addition to HDW, Blohm + Voss in Hamburg as well as Nordseewerke at Emden are also subsidiaries of TKMS. One Equity Partners holds 25% of the TKMS shares.

In December 2005, ThyssenKrupp acquired 60% of Atlas Elektronik from BAE Systems, with EADS acquiring the remaining 40%.

In August 2007, ThyssenKrupp Materials North America acquired OnlineMetals.com, a small-quantity distributor of semi-finished metals and plastics based in Seattle, WA.

In early 2008, ThyssenKrupp Aerospace acquired Apollo Metals and Aviation Metals, both suppliers to aerospace and defence.

On 11 May 2007, ThyssenKrupp AG announced an investment of €3.1 billion (US$4.19 billion) for a project consisting of building new carbon steel and stainless steel processing facilities in southern Alabama that would employ 2,700 people when fully operational. The project, along with a multi-billion dollar greenfield steelmaking facility in Brazil, is a cornerstone of ThyssenKrupp's new global expansion strategy into the North American and NAFTA high-value carbon steel markets. The company announced that the investment was increased to $4.6 billion in 2010. As of the date of the announcement, the investment was the largest private economic development investment in Alabama's history and the largest by a German company in the U.S. [10] The site selection announcement came after several months of competition involving several southeastern sites which was eventually narrowed between a site on the Mississippi River in Convent, Louisiana, and a site on the Tombigbee River, in Calvert, Alabama in north Mobile County, about 40 miles north of Mobile. The site in Alabama was eventually chosen. Groundbreaking on the Calvert facilities was held in November 2007. The carbon steel and stainless steel companies are independent and operate under different management teams. Co-locating both facilities on the same site enabled the company to optimize the investment in infrastructure and in some shared processing.

The carbon steel company,ThyssenKrupp Steel USA, which represented seventy percent of the overall project investment and hiring, consists of a state-of-the-art hot strip mill, cold rolling mill, and four hot dip galvanizing lines. The hot strip mill began operations in July 2010, the cold roll mill in September 2010, and the first of the hot dip galvanizing lines in March 2011. The company projects to be fully operational in late 2011 and employ approximately 1,800 people at that time. ThyssenKrupp Stainless USA projects to employ approximately 900 people when fully operational in late 2012. At full production, ThyssenKrupp Steel USA will have the capacity to produce 4 million metric tons of carbon steel for NAFTA customers in the automotive, construction, appliance, pipe and tube, and service center industries. In July 2011, the carbon steel project was awarded "Best Greenfield Technology" by American Metal Market, considered to be the longest continuously published newspaper in the metals industry [11].

ThyssenKrupp Stainless USA has built a cold roll mill and is in the process of building a meltshop. The company projects it will employ approximately 900 people when fully operational in late 2012. In January 2009, ThyssenKrupp announced that in response to the weakened North American stainless steel market and the detoriating global economy, the production startup date for the cold rolling line for ThyssenKrupp Stainless USA would be delayed at least one year while its meltshop would be further delayed until the last quarter of 2011. On December 10, 2010 ThyssenKrupp announced approval for start of construction for the meltshop with an expected completion date of December 2012.[12]

Additionally, the Alabama State Port Authority invested over $100 million to build a state-of-the-art transloading slab terminal on the southern tip of Pinto Island in Mobile Bay to service the inbound raw material slabs for the upriver carbon steel facility. Raw material slabs shipped to the Alabama facility from ThyssenKrupp CSA are transloaded from panamax ships at the terminal onto shallow draft barges for transport upriver to the facility. The terminal is equipped with three wide-span gantry cranes with state-of-the-art magnetic lifting gear designed by ThyssenKrupp and utilizes RFID technology to read indentifiers on each slab and provide up-to-date inventory records that provide each slab's location and weight. The same magnetic techology is also used at ThyssenKrupp's Calvert facility. The terminal was necessary to Alabama's award of the project since the Tombigbee River depth and lack of turning basins prohibit deep draft ship navigation to the site in Calvert.[13]

In November 2006, five elevator manufacturers, including ThyssenKrupp, were found guilty of price fixing by the EU, over 9 years,[14] along with Otis Elevator Co., Schindler Group, Kone and Mitsubishi Elevator Europe. A few months later on 21 February 2007, ThyssenKrupp was fined US$629 million (€479 million) by the EU (Otis was fined $295 million).[14] The EU Competition Commission reported that the companies had worked to rig bids for procurement contracts, share markets, and fix prices between at least 1995 and 2004.[14] The Commission reported that the companies "did not contest the facts" found by EU regulators, noting none of the accused requested a hearing to answer the allegations.The fines totaled US$1.3 billion.[14]

On 6 December 2007, an accident inside a plant in Turin, Italy caused the death of seven steelworkers. It appears that a damaged manifold burst and showered the workers with flaming coolant oil; they attempted to extinguish the flames with water but instead caused a flash fire.[15]
The plant was scheduled to be closed in February and was understaffed, but due to a delay in the other plant in Terni, Turin's workers were often forced to perform overtime in the last months.[16] Four days before the accident, another fire took place, without any casualties.[15] The accident happened around 1:30 am, after four hours of overtime.[15] When the workers tried to use nearby extinguishers, they found three out of five depleted.[17] A technician admitted to being instructed by a manager of the company to fill every extinguisher in the factory the day after the accident, in order to mislead investigators.[18] The Italian magistrates are still examining the causes of the fire, with workers describing lax safety measures to investigators. During the investigations, a document was seized from Harald Espenhahn (CEO of the Italian division of Thyssenkrupp). The document states that the only survivor should be taken to court, because he is accusing Thyssenkrupp in the media. The document also states that the fire was due to the fact that the workers were "distracted".[19]
CEO Espenhahn has been charged by the State prosecutor of Turin with "voluntary multiple murder with eventual malice" ("omicidio volontario multiplo con dolo eventuale"), while five other managers and executives have been charged with "culpable murder with conscious guilt". All have been also charged with "malicious omission of safety measures".[20]. On Friday 15 April 2011, Espenhanh and all the other indictees have been sentenced guilty of all charges; Espenhahn has been sentenced to sixteen and a half years in jail and to a life-long ban from holding public offices.