Six Flags Discovery Kingdom, formerly Six Flags Marine World, Marine World, The New Marine World Theme Park, and Marine World Africa USA, is an animal theme park located in Vallejo, California. The park includes a variety of roller coasters and other amusement rides, along with a collection of animal exhibits and shows. It has been part of the Six Flags chain of amusement parks since 1999.

The park first opened in 1968 as Marine World, a small oceanarium in Redwood City, California. In the mid-1970s, they merged with a failing land-animal park called 'Africa, USA', and became Marine World Africa USA.

In late-1985, the increase in the value of the property the park occupied became too great a tax burden. Following an intensive search for a new site, construction began on a new and larger park facility in Vallejo, California (about 55 miles (89 km) north from Redwood City). The new Marine World opened to visitors in 1986, and remained under control of the non-profit Marine World Foundation, using Garfield as a mascot at various points. The park defaulted on its debt to the City of Vallejo, and thus became owned by the city, in 1996.

Conversion to a theme park

The number of amusement rides increased over the next few years, including the addition of several major roller coasters. In 1998, the park's name changed again, this time to The New Marine World Theme Park. The 1998 season saw the addition of two major roller coasters, Kong and Boomerang: Coast to Coaster. Kong was relocated from Opryland USA after that park shut down in 1997 and opened at the Marine World in May 1998. Other major additions that year included Hammerhead Shark, a Zamperla Prototype Hawk 48; VooDoo, A HUSS Top Spin; Monsoon Falls and White Water Safari, Intamin AG water attractions. DinoSphere also received a new ride film, "Dino Island II: Escape from Dino Island" which featured improved graphics along with a new storyline.

Addition to the Six Flags chain 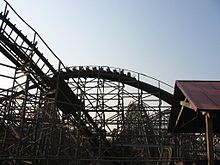 After more additions of amusement rides, Premier made a name change to Six Flags Marine World in 1999. The most notable result of the name change was the rights to Warner Bros.' Looney Tunes characters. With the new name, the park received the wooden roller coaster called Roar. Built by Great Coasters International Inc., it was the first coaster to feature Millennium Flyer trains. The 1999 season also saw the introduction of Tasmanian Devil, a Frisbee flat ride manufactured by HUSS, and Scat-A-Bout, a typical Scrambler flat ride. Although both rides opened in 1999, they were purchased by the park in 1998 but not constructed until 1999 because of construction timetables that prevented them being constructed in time for the 1998 season opening. Popeye's Seaport was rebranded "Looney Tunes Seaport" and received the Roadrunner Express kiddie coaster.

In 2000, the park opened its fourth major roller coaster dubbed Medusa. Medusa was designed by Bolliger & Mabillard. Medusa lasts three minutes. Starting with a 150-foot-tall (46 m) drop, it then goes through a 128-foot-tall (39 m) vertical loop, a dive loop, a Zero-G roll, a sea serpent roll, and two corkscrews. Medusa is one of the parks most popular rides.[1] With the addition of Medusa, the park also received the Cobra family coaster and built a new parking lot south of the park.

The park received its fifth major roller coaster in 2001, V2: Vertical Velocity. Built by Intamin AG, the ride was the first "Spiraling Impulse Coaster" on the west coast and took the record for being the tallest and fastest coaster in Northern California. The ride was plagued with technical issues when it opened, which resulted in extensive down time. The park also eventually turned off the LIM motor on the back tower that held the train in position for a few seconds on its second trip up the tower.[verification needed] The park also added the "Warrior of the Dawn" film to its DinoSphere theater.

2002 saw a notable modification to Vertical Velocity. Because of local building restrictions, the height limit on all roller coasters at the park is 150 feet (46 m), while V2 exceeded that limit by about 36 feet (11 m). Thus, they lowered the reverse tower 36 feet (11 m) and turned the forward tower into a 45° angle with an incline heartlineroll that spiraled over the park's main entrance. So far, Vertical Velocity is the only Impulse Coaster to do this. The park turned the LIM motor on the reverse tower back on in 2002 season; however the motor failed to hold the train completely in place and slipped significantly. The motor was eventually turned off again in the 2003 season.[original research?] Also the park began to show "7th Portal", a 3-D comic book film by Stan Lee, in its DinoSphere Theater.

The park added its sixth major roller coaster, Zonga, in 2003. The ride designed by Schwarzkopf, was relocated from Six Flags Astroworld, and received major track modification by Premiere Rides before it opened at Marine World. Zonga opened in late April to a sporadic operation. The ride was often closed because of mechanical problems, and when it did operate, it often closed for short periods of time due to ride errors. Eventually the park delayed its opening to 12 noon every day, completely blocking the ride plaza to park guests. Zonga's last season of operation was 2004, it then sat dormant until it was removed in 2006 and placed in the parking lot for storage. By the beginning of the 2007 season, Zonga was removed from the parking lot. It is now operating at the San Marcos National Fair in Mexico.

The park also began showing "Stargate SG3000" in its IWerks 3D Turbo Theater which finally received new branding and was no longer called "DinoSphere". Stargate, however, did not feature the 3D effect and rarely received good reviews from guests.[original research?]

2006 saw the addition of Tava's Jungleland, a children's area located in the back of the park near the main land animal attractions, featuring nine new attractions for families and small children to enjoy. 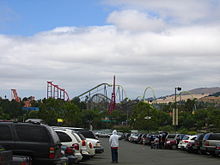 On January 17, 2007, the park announced its new name, "Six Flags Discovery Kingdom." The new name reflects the image of an animal park, a thrill-ride park, and a marine park. The park was separated into different themed lands of Land, Sea and Sky. $16 million was spent on park improvements including new signage, new shows, and converting the 3D theater into a "4D" theater. The park also added a Thomas the Tank Engine-themed children's area called Thomas Town, which opened June 20, 2007.

The animal aspects of the park have not vanished under this onslaught of steel and lights, and the park continually adds animal attractions every year. Discovery Kingdom continues to showcase its marine mammals and is currently home to the orca Shouka, who was at the Six Flags park in Ohio until 2004. In 2005, the park added "Ocean Discovery", a major interactive marine animal area that lets guest interact and pet sting rays and Atlantic bottlenose dolphins as well as getting up close to South African penguins.

On June 5, 2007, Six Flags confirmed media reports that Six Flags will exercise their option to buy the park.[2]

For 2008, the park featured its longest operating season since it was branded as a Six Flags park. The park has shut down the IWerks 3D Turbo Theater due to escalating repair costs on the out of date operating system and hardware. The park received its 8th roller coaster named Tony Hawk's Big Spin, which is located on the former Zonga concrete pad. The ride features a unique layout compared to the three other coasters which share the name, including a base frame instead of permanent concrete footers and a higher top speed. Tony Hawk's Big Spin opened on May 23, 2008.

2009 also saw the addition of the park's official page on Facebook. Fans of the park can stay up to date with all the latest news, updates, and photos from Discovery Kingdom.

The park's major competition in the San Francisco Bay Area is California's Great America in Santa Clara, next to San Jose.

In late 2010, Six Flags began the process of removing licensed theming from attractions. They terminated several licenses including their license with Thomas the Tank Engine and Tony Hawk. Tony Hawk's Big Spin was renamed and rethemed to Big Spin, then Pandemonium. Thomas Town will be renamed and rethemed to Seaside Junction in time for the 2011 season.[3]

For the 2011 season, the park introduced the SkyScreamer. The new swing ride is 150 feet (46 m) high and soars in a 98-foot (30 m) circle at speeds over 43 miles per hour (69 km/h). The ride opened on May 27. A few days before July 25, 2011, SkyScreamer at Six Flags St. Louis experienced a major malfunction that has caused it to be closed for the rest of the 2011 season. According to more than one report, something caused the counterweight to suddenly drop to the bottom of the tower, while launching the empty rider carriage to the top, causing damage on both ends. Discovery Kingdom's version was closed as a precaution to allow for further inspection. Discovery Kingdom's SkyScreamer was reopened as of August 12, 2011.

The haunt at Discovery Kingdom is their annual Fright Fest Halloween event. Two haunted houses, scare zones, and many ghouls are added throughout the park. Tinseltown Terror haunted house is located in the park's bumper car ride. Brutal Planet haunted house is normally located in the Roar plaza near where Zonga used to be. The scare zone is located between Ocean Discovery and the entry plaza. This is where the world famous cockroach eating contests are held.

In 2009, two haunted houses were replaced in October with newer ones.

New for 2007, Discovery Kingdom introduced the Wheel of Fright and the Coffin of Fear for Fright Fest. 2007 also brought the addition of the Kamp Khaos haunted house, replacing Brutal Planet. Kamp Khaos was also placed in a new location for a Haunted House, inside the Monsoon Falls water ride lagoon.

The other major seasonal event, Holiday in the Park, made its debut November 23, 2007. The event featured Santa Claus, holiday themed shows, and other seasonal treats. Discovery Kingdom also featured the world's largest Christmas tree as part of the celebration. The tree was 125 feet (38 m) tall and had a diameter of 4 feet (1.2 m). Due to its size, a Chinook helicopter was needed to set it into place.[5] 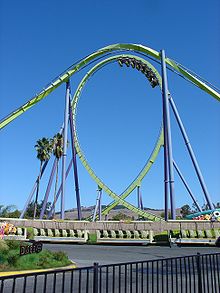 Tava's Jungleland (all rides opened in 2006)

There have been countless complaints from various animal rights groups about the treatment of animals at Six Flags. They claim that most of the animals, such as lions, camels, tigers and giraffes, are kept in small, inadequate enclosures. These organizations have also complained that animals sensitive to loud noises, such as fennec foxes and flamingos, are surrounded by roller coasters and loud speakers.[6] One of the complaints involves the treatment of elephants. IDA, an animal rights group, is against the idea of elephants performing, and find the elephant enclosure to be too small and barren.