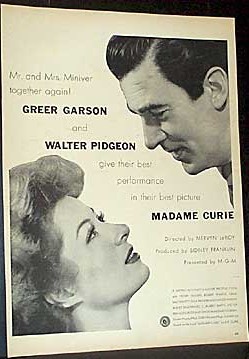 "Madame Curie" is a 1943 made by . It was directed by and produced by Sidney Franklin from a screenplay by , and (uncredited), adapted from the biography by .

It stars , , , , , Dame May Whitty, , , and and featuring narration read by . The film tells the story of Polish-French physicist Marie Curie.

Garson and Pidgeon had starred together in the previous year's Best Picture "Mrs. Miniver".

Marie Sklodowska () is a poor, idealistic student living in Paris and studying at the Sorbonne. She neglects her health and one day faints during class. Her tutor, Prof. Perot () is sympathetic and, finding that she has no friends or family in Paris, invites her to a "soirée" his wife is throwing for a "few friends". Among the many guests is physicist Pierre Curie (), an extremely shy and absentminded man completely devoted to his work. He allows Marie to share his lab and finds that she is a gifted scientist. Appalled that she plans on returning to Poland to teach after graduation, rather than devoting her life to further study, he takes her to visit his family in their country home. Marie and Pierre both tend to concentrate on science to the extent that they don't realize until the last minute they have fallen in love. Even when Pierre asks Marie to be his wife, he does so in terms of reason, logic and chemistry.

Fascinated by a demonstration she saw as an undergraduate, of a rock that seems to generate enough energy to take small photographs, Marie decides to make the rock's energy that the subject of her doctoral study. The measurements she takes don't seem to add up, and she decides there must be a third radioactive element in the rock in addition to the two she knows are in there. (In the midst of discussing this, she discloses offhandedly to Pierre's family that she's pregnant.)

The physics department at the Sorbonne refuses to fund their research without more proof of the element's existence, but allows them to use a dilapidated old shed across the courtyard from the physics building. In spite of its disadvantages, they import eight tons of pitchblende ore and cook it down to look for the element they call radium. In spite of inability to separate out pure radium, they know something is definitely there, as Marie's hands are being burned. They hit on a tedious method of to arrive at pure radium.

Now world-famous, they go on vacation to rest after all the press conferences and the Nobel Prize. They're granted a new laboratory by the university; before its dedication Marie shows off her new dress, inspiring Pierre to go get her a set of earrings to go with it. Walking home in the rain, he absentmindedly crosses the street in front of a delivery wagon and is run down and killed. Marie almost loses her mind, but after the concerned Prof. Perot counsels her, she rallies when she remembers Pierre's words that if one of them should die, the other must go on just the same. The film concludes with a speech she gives at the 25th anniversary celebration of the discovery of radium, expressing her belief that science is the path to a better world.

* In March 1938, contacted , then recently moved to Hollywood, saying she would put him in touch with MGM for a writing contract. "Madame Curie" was originally to star and be directed by . (, "Aldous Huxley: A Biography" (1974), p. 369 and , "Garbo" (1996).) MGM ultimately rejected Huxley's script for "Madame Curie" as "too literary".
* The film is heavily fictionalized for dramatic purposes and completely omits any mention of Marie's family in Paris, including her sister Bronislawa, an , with whom she was very close. There is also virtually no mention of Marie's intense devotion to politics and the liberation / independence of her native .