Hagfish are marine craniates of the class Agnatha or Myxini, also known as Hyperotreti. Some researchers regard Myxini as not belonging to the subphylum Vertebrata.[1] That is, they are the only living animals that have a skull but not a vertebral column.

Despite their name, there is some debate about whether they are strictly fish (as there is for lampreys), since they belong to a much more primitive lineage than any other group that is placed in the category of fish (Chondrichthyes and Osteichthyes). The earliest fossil record dates back approximately 550 million years, or earlier to the Lower Cambrian period.[2] Their unusual feeding habits and slime-producing capabilities have led members of the scientific community and popular media to dub the hagfish as the most "disgusting" of all sea creatures.[3][4][5] Although hagfish are sometimes called "slime eels", they are not eels at all.[6]

Hagfish average about half a metre (18 in); The largest known species is Eptatretus goliath with a specimen recorded at 127 cm, while Myxine kuoi and Myxine pequenoi seem to reach no more than 18 cm.

Hagfish have elongated, eel-like bodies, and paddle-like tails. They have cartilaginous skulls (although the part surrounding the brain is composed primarily of a fibrous sheath) and tooth-like structures composed of keratin. Colors depend on the species, ranging from pink to blue-grey, and black or white spots may be present. Eyes are simple eyespots, not compound eyes that can resolve images. Hagfish have no true fins and have six or eight barbels around the mouth and a single nostril. Instead of vertically articulating jaws like Gnathostomata (vertebrates with jaws), they have a pair of horizontally moving structures with tooth-like projections for pulling off food. The mouth of the hagfish has two pairs of horny, comb-shaped teeth on a cartilaginous plate that protracts and retracts. These teeth are used to grasp food and draw it toward the pharynx.[7] 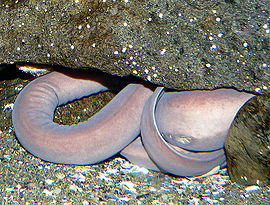 Pacific hagfish trying to hide under a rock

Hagfish are long and vermiform, and can exude copious quantities of a slime or mucus (from which the typical species Myxine glutinosa was named) of unusual composition. When captured and held, e.g., by the tail, they secrete the microfibrous slime, which expands into a gelatinous and sticky goo when combined with water; if they remain captured, they can tie themselves in an overhand knot which works its way from the head to the tail of the animal, scraping off the slime as it goes and freeing them from their captor, as well as the slime. It has been conjectured that this singular behavior assists them in extricating themselves from the jaws of predatory fish or from the interior of their own "prey", and that the "sliming" might act as a distraction to predators.

Recently it has been reported that the slime entrains water in its microfilaments, creating a slow-to-dissipate viscoelastic substance, rather than a simple gel, and it has been proposed that the primary protective effect of the slime is related to impairment of the function of a predator fish's gills.[8] It has been observed that most of the known predators of hagfish are varieties of birds or mammals; it has been proposed that the lack of marine predators can be explained by a "gill-clogging hypothesis", wherein one purpose of the slime is to impair the gill function of marine animals that attempt to prey on the hagfish. If true, it could be regarded as a highly successful evolutionary strategy against predatory fish.[9]

An adult hagfish can secrete enough slime to turn a 20 litre (5 gallon) bucket of water into slime in a matter of minutes.[12]

Research is ongoing regarding the properties and possible applications of the components of hagfish slime filament protein.

Hagfish generally respire through taking in water through their pharynx, past the velar chamber and bringing the water through 6 internal gill pouches. The gill pouches lead to a common aperture on the ventral side of the hagfish. The esophagus is also connected to the common aperture on the ventral side through a pharyngocutaneous duct (esophageocutaneous duct), which has no respiratory tissue. It is likely that this pharyngocutaneous duct is used to cough up indigestible materials. Hagfish also have some cutaneous respiration via the blood sinuses under their skin. This can be essential for hagfish to respire while feeding, since they do not have operculi to beat to produce current across the gills (as in the case of teleost fish).

In December 2003, an article was published by the University of Queensland claiming the hagfish's eye, which lacks both lens and extrinsic musculature, as being significant to the evolution of more complex eyes.[13] Hagfish eyespots, when present, can detect light, but as far as is known none can resolve detailed images. In Myxine and Neomyxine, the eyes are partly covered by the trunk musculature.[14] 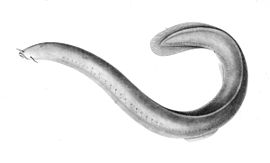 Drawing of a New Zealand hagfish.

Very little is known about hagfish reproduction. In some species, sex ratio has been reported to be as high as 100:1 in favor of females. Some hagfish species are thought to be hermaphroditic, having both an ovary and a testicle (there is only one gamete production organ in both females and males). In some cases it is thought that the ovary remains non-functional until the individual has reached a particular age or encounters a particular environmental stress. These two factors in combination suggest that the survival rate of hagfish is quite high.

Depending on species, females lay from 1 or 2, to 20-30, tough, yolky eggs. These tend to aggregate due to having Velcro-like tufts at either end. Hagfish are sometimes seen curled around small clutches of eggs. It is not certain if this constitutes actual brooding behavior.

Hagfish do not have a larval stage, in contrast to lampreys, which have a long larval phase.

The single testicle or ovary has no transportation duct. Instead, the gametes are released into the coelom until they find their way to the posterior end of the caudal region, whereby they find an opening in the digestive system.

Two Pacific hagfish actively feeding on a dead sharpchin rockfish, Sebastes zacentrus, while one remains in a curled position at the left of the photo.

While polychaete marine worms on or near the sea floor are a major source of nutrition, hagfish can feed upon and often even enter and eviscerate the bodies of dead and dying/injured sea creatures much larger than themselves. They are known to devour their victims from the inside.[15] Hagfish have the ability to absorb dissolved organic matter across the skin and gill, which may be an adaptation to a scavenging lifestyle, allowing hagfish to maximize sporadic opportunities for feeding. From an evolutionary perspective, hagfish represent a transitory state between the generalized nutrient absorption pathways of aquatic invertebrates and the more specialized digestive systems of aquatic vertebrates.[16]

Like leeches, they have a sluggish metabolism and can survive months between feedings;[17][18] their feeding behavior, however, appears quite vigorous.

In captivity, hagfish are observed to use the overhand-knot behavior "in reverse" (tail-to-head) to assist them in gaining mechanical advantage to pull out hunks of flesh from carrion fish or cetaceans, eventually making an opening to permit entry to the interior of the body cavity of larger carcasses. It is to be expected that a healthy larger sea creature would be able to outfight or outswim this sort of assault.

However, this energetic opportunism on the part of the hagfish can be a great nuisance to fishermen, as they can devour or spoil entire deep-drag netted catches before they can be pulled to the surface. Since hagfish are typically found in large clusters on and near the bottom, a single trawler's catch could contain several dozen or even hundreds of hagfish as bycatch, and all the other struggling, captive sealife make easy prey for them.

The digestive tract of the hagfish is unique among the vertebrates because the food in the gut is enclosed in a permeable membrane, analogous to the peritrophic matrix of insects.[19]

Hagfish are usually not eaten owing to their repugnant looks, as well as their viscosity and unpleasant habits. However, a particular species, the inshore hagfish, found in the Northwest Pacific,[20] is valued as food in the Korean Peninsula. The hagfish is kept alive and irritated by rattling its container with a stick. This produces the large quantity of slime that gives the hagfish its alternate, if inaccurate, name, "slime eel". This slime is used much as egg whites in various forms of cookery in the region.

The inshore hagfish, known as kkomjangeo (꼼장어) or meokjango (먹장어) in Korean and Nuta-unagi (ぬたうなぎ) in Japanese, is the only member of the hagfish family that has a seasonal reproductive cycle.

In recent years hagfish have become of special interest for genetic analysis investigating the relationships among chordates. Their classification as agnathans places hagfish as elementary vertebrates in between invertebrates and gnathostomes. However there has been long discussion in scientific literature about whether the hagfish were even non-vertebrate. This position is supported by recent molecular biology analyses which tend to classify hagfish as invertebrates (see references) within subphylum Craniata, because of their molecular evolutionary distance from Vertebrata (sensu stricto). A single fossil of hagfish shows that there has been little evolutionary change in the last 300 million years.[21]

As of February 2011, about 77 species are known, in 5 genera (two are being retained in the no-longer recognized genus Paramyxine and are awaiting taxonomic issues to be resolved before being transferred to Eptatretus (see below)). A number of the species have only been recently discovered, living at depths of several hundred metres.