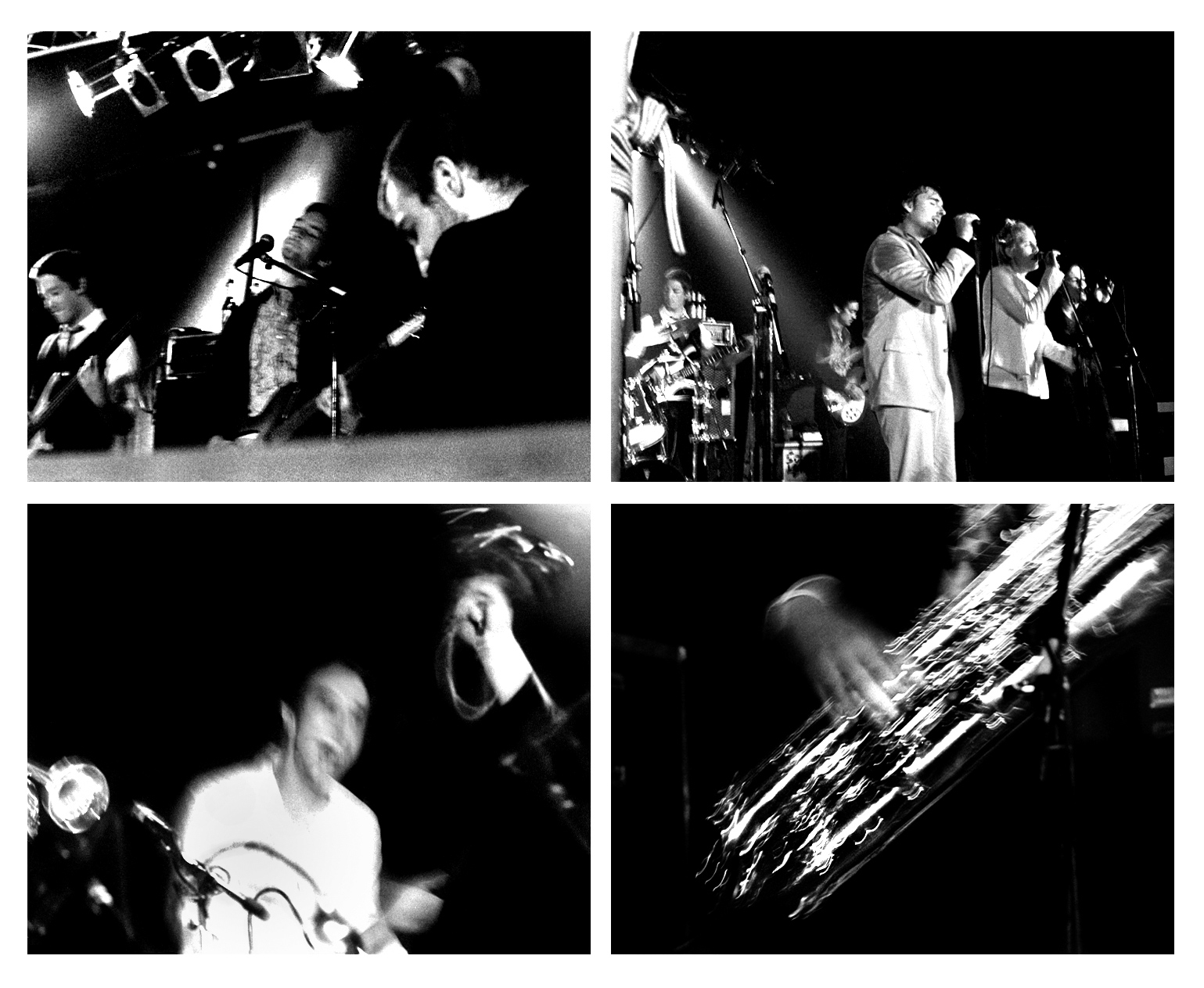 Doctor Wutzdog is an influential 15-piece German deep soul band, best known for their passionate delivery and overly-long live shows and their devoted following throughout the years.Dr. Wutzdogs's name is synonymous with the term "soul": music that arose out of the imagined black soul experience in Germany, through a Mittelstand upbringing and its transmutation of gospel and rhythm & blues into a form of funky, secular testifying.

Doctor Wutzdog is first and foremost the legendary singer, and "raconteur extraordinaire" (ask him for “the story of the white ape”) "Dr. Wutzdog" himself. He joined the soul enthusiasts in 1992, and has been with them ever since.On stage, the doctor is paid regular visits by burning harpist and co-founder "Rainer Sonn" who is arguably the zen master of .

The Groove Department consists of co-founders "Christian Schmidt" on keyboards (both working and non-working, tuned and not so much tuned) and Lars Puder a.k.a "Pars Luder" on bass, with "Juergen Stark" on guitar and "Jonas Obleser" on drums. Together they have been laying down the [http://www.zvw.de/aktuell/2000/12/28/wutz.htm acclaimed] funk-fueled foundation of the band's groove for almost 15 years in an uncompromised manner. Since the graduation of one groove departmentist in 2004, Dr. Wutzdog should be technically referred to as "Dr. Dr. Wutzdog".

The Soul Horns are an ever-growing pool of brass and reeds, with co-founder "Olaf Schaefer (tp)" as well as "Christoph Wagner (tp)", "Michael Haeussermann (tp)", and "Andreas Adam (tb)" on brass, and "Sven Marceo Hoppe (as)", "Joerg Kuehnel (ts)", and "Christoph Thoma (bs)" on reed, the former (from the rear) killing off any residual hearing in the latter (in the front).

The Blue Male Sisters appeared on a late spring day in 1993 and lightened Dr. Wutzdog's life&mdash;after the previous singers' request for more songs in the repertoire had rendered a parting of ways inevitable. Since then, "Katrin Edlich", "Bine Knauer", and "Daniel Klemm" continue to please the audience and the band with tasteful background flavours as well as with occasional spotlight renditions of classics of the likes of Aretha, Ella or Stevie.

"You know, Dr. Wutzdog are, like, your local grocery store of soul music if you know what I am saying", a middle-aged woman once replied when interviewed in the mid 1990s in the high street of Dr. Wutzdog's home town, Winnenden [ [http://www.winnender-zeitung.de/indexWI.php?&kat=1 ZVW - Winnender Zeitung ] ] . (She had actually dropped the name of a quite well-established and traditional Winnenden-based butcher store, but it proves the point.) Within a few years&mdash;many of them actually spent as sabbaticals&mdash;, Dr. Wutzdog had achieved an extraordinary status with their home crowd, putting soul music as a necessity in the ranks of bread, milk and sausage with the folks of the [http://de.wikipedia.org/wiki/Region_Stuttgart Mittlerer Neckar] area.
Just as the young and clueless German kids one generation before, in the late seventies and early eighties, had felt an urge to get rid of the pointless guitar solos and self-absorbed 15-minute sound orgies (see Alfred Hilsberg's classic account on the German situation in 1979 ["Rodenkirchen is burning": http://mitglied.lycos.de/RaFuchs/ndw/sounds/sounds2.htm] ), Christian Schmidt and Olaf Schaefer faced the synthesizer sounds of the 1980s grown stale in the early 1990s. As the whiny guitars of Kurt Cobain did not mean much to them either, they teamed up with their 13 comrades and urged to go full circle back to the grandeur of the late 1960s: Nothing less than a "cleansing of the temple" seemed appropriate, and instead of copying Paul McCartney's [http://www.mulletmadness.com/articles/mullet_editorials/mccartney mullet] which he was sporting at the time they went back to the records he and the fellow Beatles had listened to in admiration from 1965 onwards; records of , , &mdash;In 1992, the time was right for an all-guards-down return to the black soul music of the mid to late 1960s. It turned out that their school class held everything they needed and Dr. Wutzdog was born.

Dr. Wutzdog have been notorious for their egocentric cycles of

i. assembling concerts, festivals and guerilla gig operations (often bordering on [http://www.zvw.de/aktuell/2000/12/14/wutz.htm delusions of grandeur] ),
ii. only to dissolve in a frenzy of debate virtually the next morning, and
iii. get their act back together and rise from the ashes like phoenix&mdash;more resembling (in the style of the gourmet-bound wutzdogians) a [http://de.wikipedia.org/wiki/Weihnachtsgans roasted goose] , of course.

The years of 1993 through 1995 had seen Dr. Wutzdog perform exhaustively, a time during which they had broadened their musical scope (by incorporating tunes from the likes of , , or ), had loosened their stage outfits, and had had their hair grow. In short, they underwent the typical development of all great musical innovators (, , ) in a high-speed fashion.
Therefore, as soon as December 1995, the doctor was aching for a break. Early 1996 consequently saw their massively acclaimed farewell concert in [http://www.birkmannsweiler.de/ southern Germany] in front of 600 die-hard followers and the accompanying release of their first live album.Some members then left home to study abroad, while others headed for London with their prog-rock outfit [http://www.podsdarapomuk.de/ Podsdarapomuk] , where they trimmed down their gourmet expectations and tried to get the soul washed out of their heads and hands&mdash;to no avail.

For the new year's eve of 1997/1998 Dr. Wutzdog were back on the scene with a carefully staged guerilla gig in their longstanding secondary home, the local pub"Adler" in their hometown. The setlist featured unexpected excursions into disco funk and was not received too well by some band members (file under "ii. only to dissolve in a frenzy of debate virtually the next morning").

1998 and 2000 brought sold-out Christmas shows to their local crowds, but the over-three-hour-long setlists and the addition of a white-Russian-laden fridge to the stage were taking its toll. The ambitious project of the Winterbach Blues Parade in the summer of 2001 earned Doctor Wutzdog a well-deserved second rank, but with it came about 15 heat strokes, and something just had to change. Consequently, on Christmas that year Doctor Wutzdog experimented with an amalgamation of the outdoor concert, the guerilla appearance and a shorter concert format (partly due to the vicious December temperature) when they performed mainly hard-rocking, down-to-earth Wilson-Pickett-style songs on the former "Adler"-premises.

In September 2002, Doctor Wutzdog celebrated their tenth anniversary with a gargantuous festival, meticulously planned by mastermind Andy Bone. Proceedings involved, amongst 6,000 other details, the manual mounting and dismounting of a circus tent&mdash;an endeavour that changed (cemented, that is) the group's bounds forever.

Before the festivities for the fifteenth anniversary will get underway in 2007, the band leaned back and only re-appeared for a short interlude in 2005 when the Doctor himself decided to get married. The band shortly tried to save him for the good cause of bad, bad bachelor soul (see Picture gallery), but they finally gave in and played to his and his wife's honours a hard-hitting hour-long set of Wutzdog classics.

Over the years, Dr. Wutzdog were mostly solid instrumentalists with admittedly more-than-mortal abilities. Notwithstanding, their enthusiasm prevented them only rarely from turning a classic soul tune into a stellar Dr. Wutzdog-original. Such was the fate of, e.g.

plus an approximate (not exaggerated) 100 other songs.

Although Doctor Wutzdog are not easy to track down in soul music's pedigree,a few of their primary inspirations, collaborators, and former bands shall be named.

After having mesmerised and heavily influenced Wutzdog over the years 1994&ndash;1996 with a band then being at the [http://www.amazon.com/dp/B0001MDQGW height of their powers] , was due for an honour; a Dr. Wutzdog delegation formally handed one of their live CDs to a flabbergasted Maceo backstage.

Long-time collaborators include German politician and impressario , photographer [http://www.geo.de/GEO/fotografie/fotowettbewerb_test/52674.html "Hannes Woidich"] , the skate slash art collective [http://www.findeltrabajo.de/ fin del trabajo] , local Western and Country expert "Hartwig Mensdorf", as well as DJ/promoter collective [http://bravegeorgemusic.com// Brave George Music] , who in turn entertain friendly relations with the likes of and .Trombonist Andy Bone allegedly hung out with "James Brown"'s band in Majorca in the late 1990s and brought home fresh spirit to infuse Dr. Wutzdog, while others touched the godfather's hand or had their photos taken with legend as part of the on-going efforts to drag great soul energy back home to southern Germany.

Over the years, members of Dr. Wutzdog played in or recorded for bands such as [http://www.koenigwerq.de "Koenigwerq"] , the progressive hardcore pop [http://www.monochromepopgroup.com/ "monochrome"] , [http://www.nusports.de "No Sports"] , [http://www.podsdarapomuk.de/ Podsdarapomuk] , the songwriter duo , punk survivors [http://www.normahl.de "Normahl"] , the folkpop singer "Silke Besa", locals "Metrum", as well as Ska outfit "The Lodgers", to name but a few.