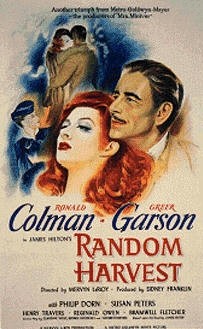 "Random Harvest" is a 1942 film based on the 1941 novel of the same name, directed by . , and adapted the novel for the screen, and received an Academy Award nomination for their work. The film departed from the novel in several significant ways, as it proved nearly impossible to translate to film otherwise. and starred as a shellshocked, c soldier and his love interest.

It was an instant critical and commercial success. Its seven Academy Award nominations included nods for , supporting actress , director , and the Best Picture. Greer Garson, whose performance was well-received, was ineligible for the , as she had already been nominated that year for her role in "Mrs. Miniver".

The film opens during the closing days of . "John Smith" () is a British officer who was gassed and became shellshocked in the trenches. He is confined to an asylum because he has lost his memory and has trouble speaking. When the war ends, jubilation reigns in the nearby town of Melbridge and the gatekeepers abandon their posts to join the celebration. With no one to stop him, Smith simply wanders off. In town, he is befriended by Paula (), a kindly showgirl, who takes him under her wing. After she discovers he has left the hospital, but seems harmless, she arranges for him to join her traveling theatrical group. After an incident that threatens to bring unwanted attention, Paula takes Smith away to a secluded country village, where they marry and are blissfully happy.

"Smithy", as Paula calls him, discovers a literary talent and tries writing to earn a living. He leaves Paula and their newborn baby for an overnight trip to , for a job interview with a newspaper. On his way to the interview, he is struck by a taxi. When he awakens, his past memory is restored, but his life with Paula is now forgotten. He is Charles Rainier, son of a wealthy businessman. None of his meager possessions, including a key, provide any clue how he got there from the battleground of France.

Charles returns home on the day of his father's funeral. His siblings are amazed, and some not all that pleased, since he inherits a large portion of the estate, including Random House, the family mansion. One of those on hand to welcome him is 16-year-old Kitty (), the stepdaughter of one of Charles' siblings. She becomes infatuated with her "uncle".

Charles wants to return to college to finish his degree, but the family's mismanaged business needs him and he puts off his own desires to rescue the many workers who depend on it and to restore the family fortune. After a few years, he has become so successful that a newspaper touts him as the "Industrial Prince of England."

Meanwhile, Paula has been searching for her Smithy. Losing their son in infancy, she returns to work as a secretary. One day, she sees Charles' picture in a newspaper and manages to become his executive assistant, calling herself Margaret (Paula being her stage name), hoping that her presence will jog his memory. Her confidante and admirer, Dr. Jonathan Benet (), warns her that simply revealing her identity will only cause Charles to resent her.

As Kitty grows up, she sends Charles love letters. Eventually, her persistence wins out and they become engaged. Margaret has Smithy declared legally dead, seven years having elapsed since he vanished, thus dissolving their marriage. While settling some details for their upcoming wedding, a hymn that Kitty is considering triggers a vague memory in Charles. Kitty realizes that he still loves someone else and, heartbroken, breaks off the engagement. When she hears Charles is in Liverpool, trying one last time to piece together his lost years, Margaret rushes to join him. They recover "Smithy"'s abandoned suitcase from a hotel, but he recognizes none of the contents, dashing their hopes.

Charles is then approached to stand for Parliament. After his triumphant election, in which Margaret provided invaluable assistance, he feels the need for a wife in his new role. He proposes to Margaret, more as a business proposition than a romantic one. She accepts.

Charles and Margaret become an ideal couple, at least to all outward appearance. She is the perfect wife and society hostess. They sometimes discuss his lost past, since it is obvious that he still feels emptiness inside. At one point, she tells him of her own lost love, without disclosing that it is him. Charles hopes their life together can fill the void they both feel. Mentally exhausted and desperately unhappy, Margaret decides to take an extended vacation abroad by herself. With time to spare before her liner sails, she revisits the hamlet where she and Smithy lived.

While Margaret is remembering happier times, Charles is called upon to mediate a strike at the Melbridge Cable Works. He succeeds. On the way to the train, the familiar surroundings begin to unlock his lost memories. This eventually leads him to the cottage he and Paula shared in the country. Hesitantly, he tries the old key, and finds that it unlocks the door. Margaret, about to leave for the boat train, makes a casual remark to the current innkeeper about the former owner, whom she met when she and Smithy honeymooned there. She is told someone else had just that morning asked about the same woman. Praying it was Charles, she runs to the cottage and sees him outside. She calls "Smithy!" He turns, memories flooding back; he cries out "Paula!" and they embrace.

Difference from the novel

The novel does not reveal that Mrs. Rainier and Paula are the same person until the very last page. Of course it could not have been filmed that way, since the actress playing Paula would be seen to be Mrs. Rainier as well.

The film finally became available in format in 2005, when released a restored and remastered version.