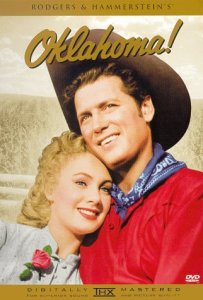 In 2007, "Oklahoma!" was selected for preservation in the United States by the as being "culturally, historically, or aesthetically significant".

This film was shot with two sets of cameras, in the new 70 mm process of and again in the more established 35 mm widescreen process for the majority of theatres lacking 70 mm equipment. Rodgers and Hammerstein personally oversaw the film themselves to prevent the studio from making the changes that were then typical of stage-to-film musical adaptations&mdash;such as putting in new songs by different composers. (They also maintained artistic control over the film versions of several of their other stage musicals).

The film "Oklahoma!" followed the original stage version extremely closely, more so than any other Rodgers and Hammerstein stage-to-film adaptation. However, it did divide the very long (more than 45 minutes) first scene into several shorter scenes, changing the locations of several of the songs in the process.

*Rather than beginning offstage, "Oh, What a Beautiful Mornin'" was now sung as Curly (Gordon MacRae) rode his horse from the now-seen cornfield "as high as an elephant's eye" to Aunt Eller's farm.
*"Kansas City" was sung and danced at the local train station where Aunt Eller (Charlotte Greenwood) and other cowboys meet Will Parker (Gene Nelson), who has just returned from said city.
*"I Cain't Say No" was sung by Ado Annie (Gloria Grahame) at a lakeside where Laurey has been skinny-dipping (very discreetly shown, with no real nudity).
*'"Many a New Day" was sung and danced in Laurey's (Shirley Jones) bedroom, as the women, stopping over at the farmhouse on their way to the Skidmore ranch, change their clothes for the upcoming Box Social that evening.

In a nod to "Green Grow the Lilacs", which was the basis of "Oklahoma!", Jud attempts revenge on Curly and Laurey by burning a haystack they stand on after the wedding, rather than simply attacking Curly with a knife, as in the stage version of the musical. In the film, however, as Curly and Laurey stand atop the burning haystack, Jud still does pull a knife and taunt Curly. The couple jumps down, with Curly landing on Jud and inadvertently causing him to fall on his own knife. (MacRae's character Billy Bigelow in the 1956 film "Carousel", another Rodgers and Hammerstein adaptation, would similarly die by falling on his knife accidentally).

expanded his Broadway orchestrations, conducted, and again choreographed. The film omitted very little from the stage production, cutting only two songs (Ali Hakim's "It's a Scandal, It's an Outrage" and Jud's "Lonely Room"), and thus ran two-and-a-half hours, much longer than most other screen musicals of the time. The movie of "Oklahoma!" revived an early talkie trend which had not lasted long&mdash;filming stage musicals virtually complete, and showing them as attractions (two performances a day, usually with an intermission, like stage productions). Although the film versions of Rodgers and Hammerstein's "Carousel" and "The King and I" did not have intermissions and cut more from the stage originals than did the film version of "Oklahoma!", they also ran over two hours, followed the stage originals quite closely and retained most of their songs. "South Pacific" (filmed in 1958), as well as most other stage-to-film musical adaptations that came after it, did have an intermission and was also quite long, as was "The Sound of Music". The trend of "road show" stage-to-film musicals lasted into the early 1970s, the last of them being the film versions of "Fiddler on the Roof" and "Man of La Mancha".

The film won two and was nominated for two others. The wins came in Best Music, Scoring of a Musical Picture (for Robert Russell Bennett, Jay Blackton, and Adolph Deutsch) and Best Sound, Recording (Fred Hynes). Nominations came in the categories of (Robert Surtees) and (for Gene Ruggiero and George Boemler).

For unexplained reasons the original UK release is a version from a noticeably grainy Cinemascope print, even though the companion DVD of "South Pacific" was taken from a pristine Todd-AO master and presented in widescreen. The current US DVD release of "Oklahoma!" by partial rights holder is a double-disc release that includes both the Cinemascope and original 70 mm Todd-AO versions in widescreen. In March 2006 this version was also released in the UK as part of a set of remastered Rodgers & Hammerstein DVDs.