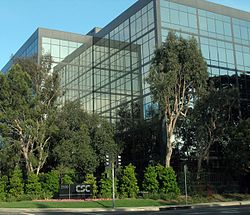 On September 28, 2009, when Xerox acquired Affiliated Computer Services, Computer Sciences Corporation became the only remaining, independent major outsourcing vendor with headquarters and major operations in the US.[4]

CSC was founded in April 1959 by Roy Nutt, Fletcher Jones and Bob Patrick.[5] Their goal was to provide programming tools such as assemblers and compilers. Jones, who ran the business and its marketing, obtained a contract from Honeywell that made the business profitable and respected within the industry. Although its competitor Computer Usage Company had been founded earlier in 1955,[6] by 1963 CSC became the largest software company in the United States and took the business public with an IPO listed on the American Stock Exchange. By the end of 1968, CSC was listed on the New York Stock Exchange and had operations in Canada, India, the United Kingdom, Germany, Spain, Italy, Brazil, and the Netherlands.

Since its beginnings in 1959, company headquarters had been in California. On January 30, 2008 the company announced that it would move its corporate headquarters from El Segundo to Falls Church, Virginia.[7]

In May of 2011 CSC obtained a contract to deliver logistics and other services to the US Postal Service under a seven-year deal with an estimated total value of $41.74 million. [9]

Exact dates are provided where possible, based on CSC Annual Reports, press releases and other published materials. When exact dates could not be verified, they were estimated.