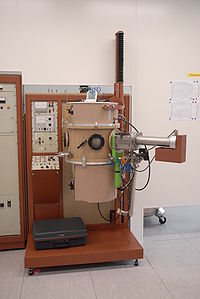 Evaporation is a common method of thin film deposition. The source material is evaporated in a vacuum. The vacuum allows vapor particles to travel directly to the target object (substrate), where they condense back to a solid state. Evaporation is used in microfabrication, and to make macro-scale products such as metallized plastic film.

Evaporation involves two basic processes: a hot source material evaporates and condenses on the substrate. It resembles the familiar process by which liquid water appears on the lid of a boiling pot. However, the gaseous environment and heat source (see "Equipment" below) are different.

Evaporation takes place in a vacuum, i.e. vapors other than the source material are almost entirely removed before the process begins. In high vacuum (with a long mean free path), evaporated particles can travel directly to the deposition target without colliding with the background gas. (By contrast, in the boiling pot example, the water vapor pushes the air out of the pot before it can reach the lid.) At a typical pressure of 10-4 Pa, an 0.4-nm particle has a mean free path of 60 m. Hot objects in the evaporation chamber, such as heating filaments, produce unwanted vapors that limit the quality of the vacuum.

Evaporated atoms that collide with foreign particles may react with them; for instance, if aluminium is deposited in the presence of oxygen, it will form aluminium oxide. They also reduce the amount of vapor that reaches the substrate, which makes the thickness difficult to control.

When evaporation is performed in poor vacuum or close to atmospheric pressure, the resulting deposition is generally non-uniform and tends not to be a continuous or smooth film. Rather, the deposition will appear fuzzy .

Any evaporation system includes a vacuum pump. It also includes an energy source that evaporates the material to be deposited. Many different energy sources exist:

Some systems mount the substrate on an out-of-plane planetary mechanism. The mechanism rotates the substrate simultaneously around two axes, to reduce shadowing.

An important example of an evaporative process is the production of aluminized PET film packaging film in a roll-to-roll web system. Often, the aluminum layer in this material is not thick enough to be entirely opaque since a thinner layer can be deposited more cheaply than a thick one. The main purpose of the aluminum is to isolate the product from the external environment by creating a barrier to the passage of light, oxygen, or water vapor.

Evaporation is commonly used in microfabrication to deposit metal films.

Comparison to other deposition methods