Perspiration (sweating, transpiration, or diaphoresis) is the production of a fluid consisting primarily of water as well as various dissolved solids (chiefly chlorides), that is excreted by the sweat glands in the skin of mammals.[1] Sweat contains the chemicals or odorants 2-methylphenol (o-cresol) and 4-methylphenol (p-cresol), as well as a small amount of urea.

In humans, sweating is primarily a means of thermoregulation, although it has been proposed that components of male sweat can act as pheromonal cues.[2] Trace amount of toxins are excreted through perspiration.

Evaporation of sweat from the skin surface has a cooling effect due to the latent heat of evaporation of water. Hence, in hot weather, or when the individual's muscles heat up due to exertion, more sweat is produced. Sweating is increased by nervousness and nausea and decreased by cold. Animals with few sweat glands, such as dogs, accomplish similar temperature regulation results by panting, which evaporates water from the moist lining of the oral cavity and pharynx. Primates and horses have armpits that sweat like those of humans. Although sweating is found in a wide variety of mammals,[3][4] relatively few, such as humans and horses, produce large amounts of sweat in order to cool down.[5]

A study has discovered that men, on average, start perspiring much more quickly than women, then twice as much when they are in the middle of exercising at the same relative intensity.[6] When men and women exercise at the same absolute intensity there are no differences in sweating responses. 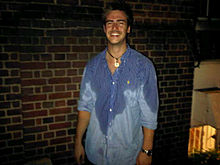 A man sweats after exercising

There are two situations in which the nerves will stimulate the sweat glands, causing perspiration: during physical heat and during emotional stress. In general, emotionally induced sweating is restricted to palms, soles, armpits, and sometimes the forehead, while physical heat-induced sweating occurs throughout the body.[9]

Sweat is not pure water; it always contains a small amount (0.2–1%) of solute. When a person moves from a cold climate to a hot climate, adaptive changes occur in the sweating mechanisms of the person. This process is referred to as acclimatisation: the maximum rate of sweating increases and its solute composition decreases. The volume of water lost in sweat daily is highly variable, ranging from 100 to 8,000 mL/day. The solute loss can be as much as 350 mmol/day (or 90 mmol/day acclimatised) of sodium under the most extreme conditions. In a cool climate and in the absence of exercise, sodium loss can be very low (less than 5 mmols/day). Sodium concentration in sweat is 30-65 mmol/l, depending on the degree of acclimatisation.

Sweat contains mainly water. It also contains minerals, lactate, and urea. Mineral composition varies with the individual, their acclimatisation to heat, exercise and sweating, the particular stress source (sauna, etc.), the duration of sweating, and the composition of minerals in the body. An indication of the minerals content is sodium (0.9 gram/liter), potassium (0.2 g/l), calcium (0.015 g/l), magnesium (0.0013 g/l).[10] Also many other trace elements are excreted in sweat, again an indication of their concentration is (although measurements can vary fifteenfold) zinc (0.4 milligrams/liter), copper (0.3–0.8 mg/l), iron (1 mg/l), chromium (0.1 mg/l), nickel (0.05 mg/l), lead (0.05 mg/l).[11][12] Probably many other less-abundant trace minerals leave the body through sweating with correspondingly lower concentrations. Some exogenous organic compounds make their way into sweat as exemplified by an unidentified odiferous "maple syrup" scented compound in several of the species in the mushroom genus Lactarius.[13] In humans, sweat is hypoosmotic relative to plasma.[14]