McNutt's father was a small business owner and her mother was a college-educated homemaker. In an interview with the National Academy of Sciences, McNutt said that in their household, women’s education was a tradition and a norm, and that her parents encouraged McNutt and her sisters academically.[1]

McNutt is one of six women scientists featured in the 1995 PBS (WGBH-TV) series, "Discovering Women."[5] How she excelled in science with a household of young daughters and the help of housekeeper Ann and her daughter is described by Jocelyn Steinke in "A portrait of a woman as a scientist: breaking down barriers created by gender-role stereotypes".[6]

McNutt has three daughters, two of whom are identical twins.[7] Her daughter, Ashley Hoffman, was "Miss Rodeo California" in 2009.[8] McNutt is a horse enthusiast and has shown her horse "Lulu" in the western pleasure class.[8]

MBARI, associated with the Monterey Bay Aquarium (back view shown), was founded and privately funded by David Packard to be the "NASA of the oceans".[11]

After a brief appointment at the University of Minnesota, McNutt worked for three years on earthquake prediction at the US Geological Survey in Menlo Park, California. In 1982, she was appointed Griswold Professor of Geophysics at the Massachusetts Institute of Technology (MIT) and she served as director of the Joint Program in Oceanography and Applied Ocean Science and Engineering, a cooperative effort of MIT and the Woods Hole Oceanographic Institution.[2]

She participated in 15 major oceanographic expeditions and served as chief scientist on more than half of them.[12] She published 90 peer-reviewed scientific articles.[12][13] Her research has included studies of ocean island volcanism in French Polynesia, continental break-up in the Western United States, and uplift of the Tibet plateau.[14]

McNutt has made notable contributions to the understanding of the rheology and strength of the lithosphere. She showed that young volcanoes could flex the lithosphere, influencing the elevation of nearby volcanoes, and used a 3-D analysis of topography and gravity data to show that the Australian plate could be strong on short time scales and weak on long scales. She also showed how subducting ocean plates could weaken and identified a large topographic feature called the South Pacific superswell.[15][16]

McNutt was president and CEO of the Monterey Bay Aquarium Research Institute (MBARI) from 1997 to 2009.[17][18] During that time the Western Flyer, MBARI's research vessel, made expeditions from Canada to Baja California and the Hawaiian Islands.[19] MBARI built the Monterey Accelerated Research System (MARS), the first deep-sea cabled observatory in the continental United States.[19] 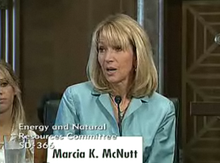 In July 2009, McNutt was announced as President Obama's nominee to be the next director of the United States Geological Survey and science adviser to the United States Secretary of the Interior.[20] The Senate unanimously approved her nomination on October 21.[21] She is the first woman director of USGS since its establishment in 1879.[20] Secretary Ken Salazar endorsed McNutt for the position.[20] In a television interview following Obama's announcement, McNutt said:

"Many other countries are far ahead of the U.S., in installing wind farms, installing solar panels, moving to alternate energies, and in preparing their populations for the decision-making necessary to cope with climate change."[22] 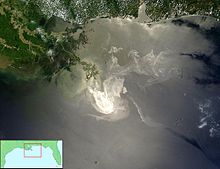 The Deepwater Horizon oil spill. McNutt headed the Flow Rate Technical Group who determined the extent of the spill.

During her first year, four major events impacted USGS in quick succession: a magnitude 7.0 earthquake in Haiti, an 8.0 earthquake in Chile, the eruption of Eyjafjallajökull and the BP oil spill.[23]

In May 2010, McNutt headed the Flow Rate Technical Group which attempted to measure the Deepwater Horizon oil spill in the Gulf of Mexico.[24] Preliminary reports from the group said that the rate of the oil spill was at least twice and possibly up to five times as much as previously acknowledged.[25] Subsequent estimates, based on six independent methodologies,[26] were four times the 1989 Exxon Valdez oil spill.[27] A refined estimate based on new pressure readings, data, and analysis, released by the United States Secretary of Energy Steven Chu and McNutt in August, said that 4.9 million barrels (with uncertainty of plus or minus approximately 10 percent) of oil had leaked from the well until it was capped on July 15.[28] The disaster was the largest ever accidental spill of oil into marine waters.[29] 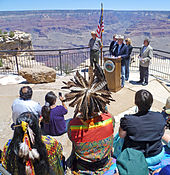 McNutt at Grand Canyon National Park with Secretary Salazar and other officials to mark an extended moratorium on uranium mining.

Public Employees for Environmental Responsibility filed a lawsuit against the department of the interior claiming that hundreds of pages of reports and communications should not be withheld, and their director, Jeff Ruch said in a press release, "...science is still being manipulated under the current administration".[30][31] Ruch said in a later press release, "That is the screwiest explanation I have ever heard"[32] in response to Salazar's announcement of a new scientific integrity policy for the Department of Interior in February 2011.[33] The American Geophysical Union announced its endorsement of the policy.[34]

McNutt participated in the reversal of a 2006 USGS policy that required agency scientists to submit their work to two internal reviewers and obtain a sign-off from a higher level official before submitting their work to external journals who then applied their own peer-review process. Scientists can now have both internal and external reviews simultaneously and the internal process is reduced to one internal review plus sign-off by the USGS Office of Science Quality and Integrity.[35]

In September 2011, a USGS team including Jack H. Medlin, Said Mirzad, Stephen G. Peters and Robert D. Tucker [36] published a report[37] which they presented at the Afghan embassy in Washington, DC, detailing 57 information packages about Areas of Interest (AOIs) that total at least 1,000,000 metric tons of untapped mineral deposits they have found in Afghanistan.[38] Scientific American speculated that replacing "opium and Taliban strongholds with a mining bonanza" could "could change U.S. foreign policy and world stability".[36] This report, which points to resources that The New York Times said in 2010 were worth $1 trillion,[39] was put into the public domain.[36] McNutt said at the time:[40]

"There is always increased risk for commercial ventures investing in new mining facilities in frontier areas such as Afghanistan, but by putting our information on the locations and estimated quantities and grades of ores in the public domain, we lower that risk, spurring progress."[40]

She is a fellow for the American Geophysical Union, the Geological Society of America, the American Association for the Advancement of Science and the International Association of Geodesy. She is a member of the National Academy of Sciences, the American Philosophical Society and the American Academy of Arts and Sciences. She chaired the President’s Panel on Ocean Exploration under President Bill Clinton. She serves on evaluation and advisory boards for institutions including the Monterey Bay Aquarium, Stanford University, Harvard University and Science magazine.[12] In 1988, McNutt won the Macelwane Medal from the American Geophysical Union, presented for outstanding research by a young scientist, and in 2007 she won the AGU's Maurice Ewing Medal for her contributions to deep-sea exploration and her leadership role in the ocean sciences.[2][15]

She is a past president of the American Geophysical Union (2000–2002).[2] In 2002, Discover magazine named McNutt one of the top fifty women in science.[41] In 2003 she was named Scientist of the Year by the ARCS Foundation.[2] She holds honorary doctorates from the University of Minnesota and Colorado College and was recognized as Outstanding Alumni in 2004 by the University of California, San Diego.[2] McNutt chaired the board of governors of the Joint Oceanographic Institutions which merged to become Consortium for Ocean Leadership for which she was trustee.[14]

Dr. Marcia McNutt is a member of the USA Science & Engineering Festival's Nifty Fifty, a collection of the most influential scientists and engineers in the United States that are dedicated to reinvigorating the interest of young people in science and engineering.[42]